The last decade has seen vessel requirements in the offshore wind market change dramatically. Average turbine sizes in the European market have grown from around 3 MW in 2010 to 8 MW last year, with an average turbine size of 12 MW expected in the region by 2025.

The rapid increase in size and height of offshore turbines has seen the wind turbine installation fleet (WTIV) struggle to keep up. Vessels delivered at the start of the decade are now either finding themselves relegated to the sidelines of the market, carrying out maintenance scopes, or being forced to carry out significant crane and deck upgrades in order to remain competitive. For smaller units struggling to compete, another option has also emerged - sale or charter into the Mainland China offshore wind market, where developers are racing to claim government subsidies before an end-of-year deadline. As tracked by IHS Markit's ConstructionVesselBase, huge demand for capable WTIVs, coupled with smaller turbine sizes has seen a number of vessels, not all from the traditional wind market, enter into the fray, alongside a swelling domestic fleet. However, once the current rush to meet the subsidy deadline subsides, it is likely that we will see some of these vessels leave the WTIV fleet and be deployed within other markets.

Looking at the current and under construction WTIV fleet, there are a total of 25 WTIVs operating in Mainland China waters only, and a further 17 operating across the rest of the globe. There are a further 14 WTIVS under construction - with five expected to work in Mainland China, and nine likely to work across other regions. Looking at the units in terms of crane lift capacity, the requirement for vessels with a much bigger crane capacity is clear. Only two units are under construction with a lift capacity less than 1,000 tonnes, with both destined for the Mainland China market. The bulk of in-service WTIVs, for both Mainland China and other regions, meanwhile, have a lift capacity between 1,000 and 1,500 tonnes. It is significant to note that there are no newbuilds in this lift category, with contractors and investors clearly opting for larger cranes for longevity in the turbine installation market. All nine of the newbuilds ordered for the global market, excluding Mainland China have lift capacities exceeding 1,500 tonnes, with a further three vessels in this category being built for the Mainland China market. 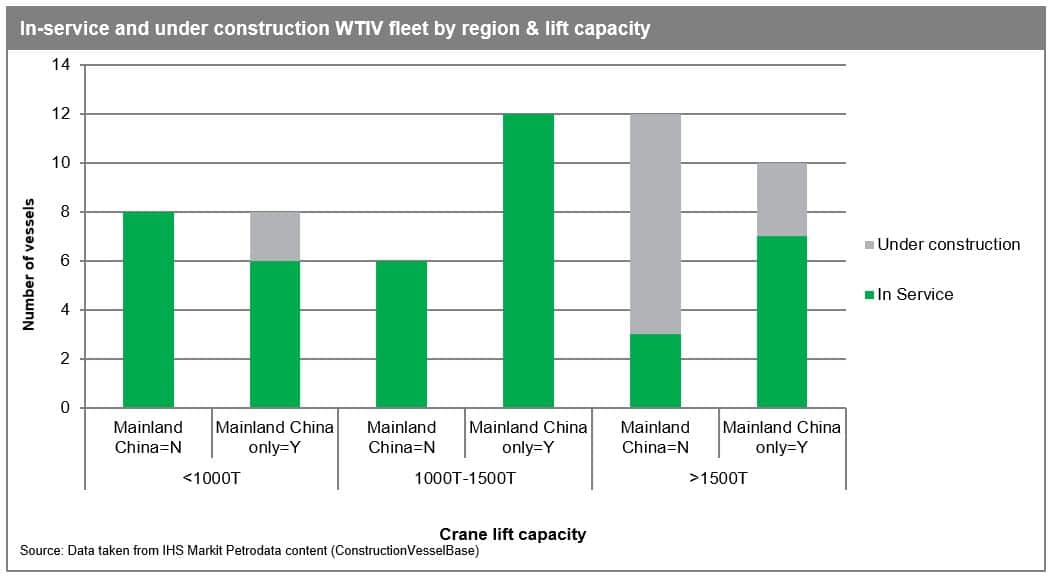 Within the European-focused market, the short lifespan of the first generation of WTIVs had previously made vessel contractors wary of committing to newbuilds, but the rapidly approaching shortfall in WTIVs capable of handling the largest turbines on the market - coupled with the globalization of the offshore wind market, with new areas such as Taiwan, Japan and the US opening up - has finally seen a rush of newbuild orders in the last 18 months. Meanwhile, the rush to upgrade and extend the working lift of existing units is on. As well as its two newbuild units, Cadeler will also upgrade the cranes on its Wind Orca and Wind Osprey, with work expected to be complete by 1Q 2024. Meanwhile, Fred. Olsen Windcarrier has brought forward its planned crane upgrade for Bold Tern to this year, with the Brave Tern and Blue Tern also scheduled to have crane upgrades. DEME has also confirmed the crane on its Sea Installer will be upgraded to 1,600 tonnes, with an option to also upgrade the crane on Sea Challenger.

There are several key specifications to be considered for both a newbuild WTIV and a vessel undergoing upgrade - the maximum hook height of the crane onboard the vessel, and the maximum lift capacity of the crane. For 14+MW turbines, it is generally considered now in the market that a maximum hook height of 150m or more is required to be technically able to install these turbines, with a minimum lifting capacity of 1,500T likely to be required. Another consideration is the deck space and payload of the vessel - for farshore projects, the number of turbine sets able to be carried onboard the vessel, and therefore the number of round trips to port, become a key consideration. The chart below shows the delivery year and current maximum hook height from deck for all in service WTIVs and those under construction, excluding the Mainland China fleet. Whilst the vast majority of the WTIV fleet consists of jackup units, the chart also includes two semi heavy lift crane vessels expected, or capable of performing turbine installation. With a fleet mostly less than a decade old, it is apparent that without crane upgrades, the life-span of a first generation WTIV is very limited, with investors again clearly opting for hook heights of around 150m and above for newbuilds. 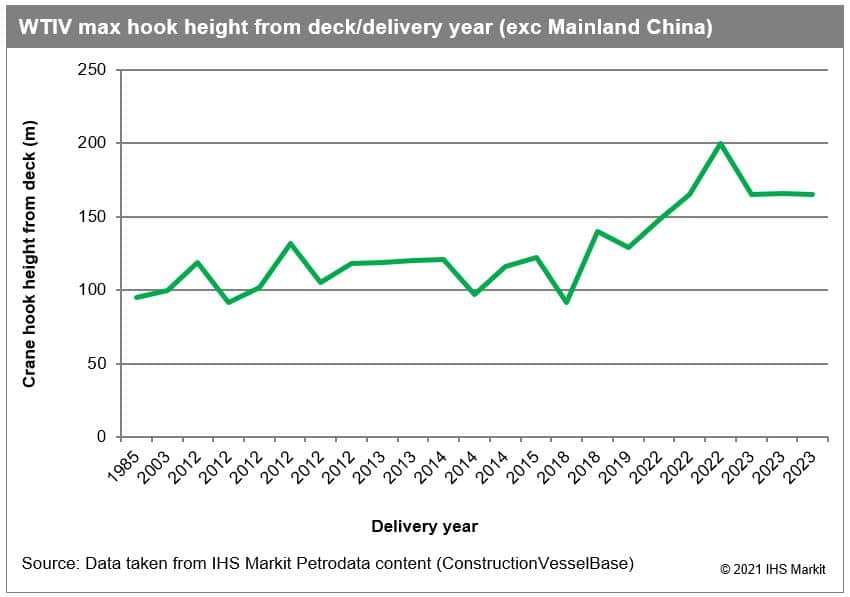 Whilst the focus has been on a newbuild jackup WTIV fleet, it is also worth remembering innovation of other vessel types. To date, commercial-scale installation of turbines has only been carried out jackup units; but in a move which may open the door to other installation methodologies, particularly for projects with difficult seabed conditions, Heerema's heavy lift semi, Thialf, will install 27 of Vestas' V174 - 9.5-MW turbines at Parkwind's Arcadis Ost in the German Baltic Sea in 2023. Turbine installation has also been carried out from barge and semi vessels within Mainland China, although for smaller turbine sizes, and in very different sea states. However, with Havfram's recent announcement that it plans to order a new semi-submersible jack-up wind turbine installation vessel (WITV) to support offshore wind projects off the east coast of the United States, there are signs that innovation in the offshore wind installation market could next move to floating or semi solutions.

ConstructionVesselBase by IHS Markit is an online platform that tracks offshore construction vessels involved in oil & gas and wind farm activities globally, including turbine and foundation installation vessels, cable lay vessels and wind Service Operation Vessels (SOVs). It provides market intelligence and reports on the industry dating back to 2007 and offers unparalleled information on vessel supply, demand and technical specifications.