Key chemical for production of plastics, paints, coatings and adhesives for automotive, medical, optical and dental applications continues to be in short supply as demand grows.

The global market for methyl methacrylate (MMA) -- a chemical critical to the production of plastics, paints, coatings and adhesives for a host of consumer markets -- is increasing significantly, while supply continues to be constrained due to production shutdowns and operational issues at aging production facilities.

MMA is essential for the production of a diverse range of consumer products, including automotive plastics, TV and electronics screens, optical devices, dental and orthodontic products, signage, lighting, windows, and household acrylic paints, coatings and adhesives. The primary application for MMA, which represents approximately 50 percent of global demand, is as a feedstock for production of polymethyl methacrylate (PMMA). PMMA is a key plastic used in a host of applications, including acrylic glass or "safety glass," often known by trademark names such as Plexiglas®** or Lucite®**. The second largest application is for production of paints and coatings, which consume about 40 percent of global MMA demand.

Currently, according to the IHS Markit Global Acrylates and Super Absorbent Polymers (SAP) Market Advisory Service, global demand for MMA through 2018 is expected to reach 3.7 million metric tons (MMT), and by 2023, demand for MMA will exceed 4.3 MMT. Much of this increased demand is due to growing demand for coatings and adhesives in China and elsewhere. Global demand growth will average slightly more than 3 percent during the next five years, with more mature, primarily western, markets growing at up to 2 percent during that time period. China, which is a developing economy, is growing at 4.5 percent per year.

MMA has been tight globally for more than 18 months, but the situation became exceptionally difficult this spring. A series of planned and unplanned production outages in Asia during 2016 crashed operating rates around the globe. Similar production challenges impacted U.S. production in 2017, and the market responded with sharp price increases for MMA, particularly in China and the U.S. 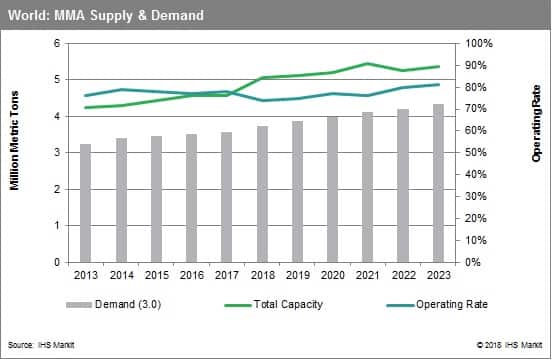 MMA prices in China have been steadily increasing during the last 18 months, reaching just under $2,900 per metric ton. In Western Europe and the U.S., producers also benefited from higher prices during the same period. European prices increased nearly 60 percent since January 2017, to $3,058 per metric ton (delivered). Prices increased nearly 20 percent in the U.S. during the same period. IHS Markit expects a cluster of further planned shutdowns in September and October, both in Asia and in the U.S., will result in a second dip this year in operating rates and constricted supply. Available MMA capacity in the U.S. will drop to 65 percent, while Northeast Asia capacity will fall 80 percent during the period, according to our IHS Markit analysis. This tightness will lead to price hikes as companies seek to add volume through internal transfers, swaps, or the merchant market. Newly built capacity will not be sufficient to cover the supply gap caused by maintenance shut-downs late this year.

Our discussions with buyers have revealed that few are aware of this rapidly approaching period of renewed market tightness, especially European buyers. Typically, European buyers expect a quiet fourth quarter of the year, due, in part, to the drop in demand in the region for household paint and home improvement products, but we believe that seasonal demand decline is likely to be less this year, and other demand sectors continue to be strong.

One of the reasons the market continues to be so tight is that between 2012 and 2016, the MMA market was oversupplied, so prices declined and manufacturers, who were barely breaking even, quit investing in new MMA production facilities, particularly in the U.S. and Western Europe. In recent years, market demand has caught up with supply, and we've seen continuous growth in demand, but the aging facilities and underinvestment in new facilities has constrained supply. The older facilities that exist have been plagued with a number of planned and unplanned shut-downs, which caused costs to rise and supply to tighten during the past 18 months. That, in turn, makes it harder for buyers to manage supply chain costs and risks. 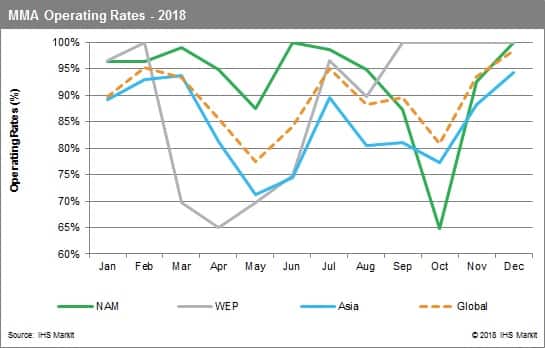 Two new facilities have been commissioned this year in the Middle East, but their added production has had a minimal impact on the market this year and will not be sufficient to cover 2018 production losses due to maintenance shut-downs. One of those plants-the Saudi Methacrylates Company, is a joint venture between Mitsubishi Chemical Corporation and Saudi Basic Industries Corporation known as SAMAC, and began operation earlier this year in Jubail Industrial City in Saudi Arabia. The Jubail SAMAC facility has a capacity of 250,000 metric tons per year. Its accompanying intermediates plant is currently producing 40,000 metric tons of PMMA per year. The second MMA plant built in the region is Petro-Rabigh's 90,000 metric tons per-year unit, located in Rabigh, Saudi Arabia. Petro-Rabigh also has an accompanying 50,000 metric tons of PMMA plant in Rabigh, which opened this spring.

MMA is a key driver for the consumption of other chemicals. Roughly one-fourth of global acetone production is used to produce MMA, so MMA is a significant contributor to downstream chemical consumption. Acetone, however, has been relatively expensive in western markets due to pricing it against what most in the industry think of as its feedstock. A longer-term issue for MMA production is that MMA demand derived from the traditional acetone cyanohydrin route is static due to the fact that it requires hydrogen cyanide (HCN) as feedstock and there are scale limitations.

However, the big issue for MMA producers and buyers is the lack of reliability of aging assets and aging technology that relies upon cyanide as a feedstock for the traditional acetone route. Cyanide is an extremely poisonous chemical that producers would like to limit, given that commercially viable, alternative paths to MMA production exist.

Newer technologies, such as the Alpha C2 process from Lucite International, the world's largest producer of MMA, offer an ethylene route to MMA production, avoiding the need for cyanide. Additionally, it offers a tremendous feedstock cost advantage to U.S. producers who have access to the country's large volumes of inexpensive ethylene production. Not only does the ethylene process offer cheaper raw materials for production of MMA, but also economies of scale, particularly for producers in the U.S. and the Middle East.

Evonik Industries, the second-largest MMA producer behind Lucite International, has developed a technology that uses ethylene to produce MMA, but the company has not yet "proven" it with a new unit. The company announced earlier this year it was evaluating all options for future development of its MMA business, and a possible sale of its assets could encourage a new investor or shareholder to invest in a new MMA unit.

Many of the world's MMA plants are a few decades old, so the industry is overdue for new capacity investments and with increasing environmental and sustainability regulations facing the industry, more producers are interested in newer technologies that avoid the cyanide route. These newer methods not only offer health and safety benefits of avoiding an extremely hazardous chemical, but also capture the feedstock cost benefits of plentiful ethylene supplies that exist in the U.S.

These options make MMA production very interesting from a process technology viewpoint. The competitive production economics is highly dependent on the relative price of C2, C3, and C4 feedstocks in each region. To make sound investment decisions, a company needs to take into account feedstock availability in each region and price fluctuations during the investment period.