Challenges for the planned carbon border tax measures in the EU

The European Commission's policy proposals to change the European Union's Emissions Trading System (ETS) and the corollary Carbon Border Adjustment Mechanism (CBAM) are complex measures that potentially have important impacts for a wide range of EU-based firms and companies in multiple sectors trading with the bloc. Their planned application also is likely to generate political fault lines.

One key provision envisages the creation of a separate ETS for housing and road transport. The overhaul of the ETS is to be accompanied by the proposed CBAM, which would replace ETS free emission allowances. The CBAM would impose a levy on a list of carbon-intensive imports to prevent 'carbon leakage', referring to the relocation of production to jurisdictions with weaker environmental regulations, initially covering imports of electricity, cement, aluminum, fertilizer, and iron and steel products, and applicable initially only to direct emissions connected to the production process.

The Commission's proposal is likely to trigger opposition from the European Parliament, some EU member states, both cross-sector and sector-specific industry associations, and non-EU stakeholders. 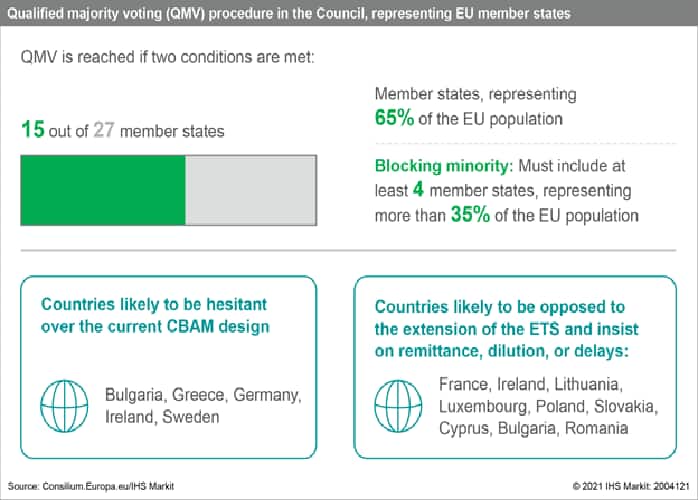 Social impact of ETS expansion is the main driver of opposition

The proposal to include housing and road transport in the carbon market is radical in that for the first time it would directly affect consumers, causing political ramifications given the resulting distributional implications. The envisaged measure would raise fuel prices and heating bills in the coming years. The distributional impact would also be uneven across EU member states. Fuel poverty is likely to determine which countries push back against the Commission's proposal. The governments of Poland, Bulgaria, and Romania have already criticized the planned expansion of the carbon market.

Although protests risks are greatest in the countries with widespread fuel poverty, the proposals also threaten to trigger popular unrest in countries with lower levels of fuel poverty, especially where there are multiple grievances that pose a persistently high risk of protests. The 'gilets jaunes' protest movement in France was triggered in November 2018 by a proposed fuel tax increase but was driven by multiple factors, including opposition to an extensive overhaul of the French welfare and tax system, illustrating this region-wide risk. The political hurdle to adopt these reforms is exacerbated by the rapid recent increase in gas and electricity prices since September 2021. Higher energy prices will continue to place downward pressure on households' disposable incomes in late 2021 and early 2022.

The CBAM's twin purpose is to safeguard the international competitiveness of EU-based producers and to incentivize the bloc's international partners, in particular the United States, to adopt similarly ambitious climate goals while avoiding retaliatory measures. This is evidenced by the limited scope of the current CBAM proposal.

However, many emerging and developing economies have expressed concerns over the impact of the CBAM. Heavily affected countries include China, Russia, Ukraine, and Turkey, although the impact on these countries would vary considerably. China's exposure is lower than that of the other aforementioned countries such as Russia in both absolute and relative terms. Moreover, China's launch of its own ETS could influence the EU's decision on how to apply the mechanism. 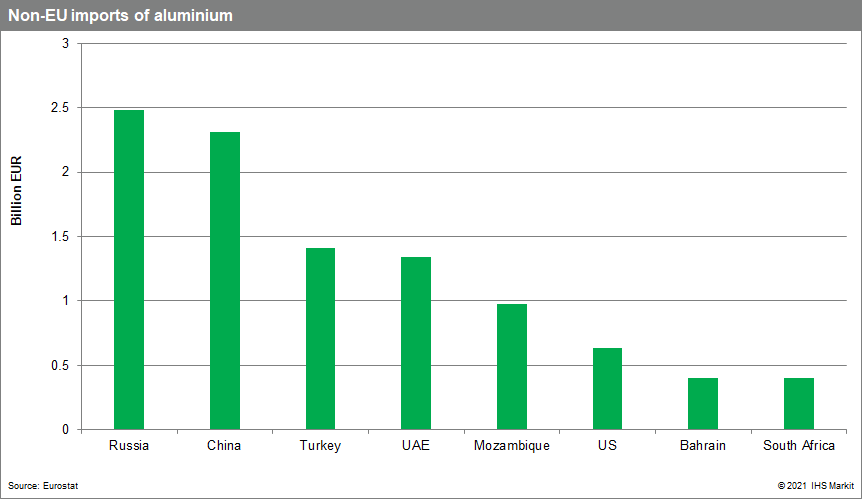 Key to mitigating the risk of retaliatory tariffs or concerted legal action from affected countries will be the CBAM's consistency with WTO rules, which the Commission has repeatedly reassured the CBAM will respect. Exemptions could be used to strengthen the environmental rationale and political legitimacy of the CBAM provided they are not implemented arbitrarily or in violation of the most-favored-nation (MFN) principle. WTO provisions leave some space for exemptions on environmental grounds, which makes it likely that the EU would exempt countries with carbon pricing mechanisms in place.

EU internal opposition against the CBAM

Within the EU, France has become the main champion of the CBAM supported by other member states such as Czechia, Denmark, the Netherlands, and Spain. Crucially, Germany remains ambivalent because of the implications the CBAM would have for exports that rely heavily on steel, such as machinery and cars. Another indicator of political resistance from EU member states is trade exposure to the CBAM. Within the EU, Bulgaria and Ireland are the most exposed; however, this exposure is offset by these imports' relatively modest share of national income, with the highest being for Bulgaria at 1.9% of GDP, versus only 0.2% for Ireland. The prospects of overcoming resistance within the EU and achieving successful and timely passage of the ETS overhaul would be boosted by the adoption of further steps to integrate the EU energy market and safeguards against sudden energy price shocks. Implementation of the EU's CBAM proposal, however, faces additional international complexities given the contradictory objectives of achieving international legitimacy and helping to meet climate goals versus industry interests, an issue that the current policy design does not resolve. The need for the CBAM to be approved in both the Parliament and the Council before entering into force in January 2023 raises the risk of delay beyond this date. However, significant progress on the issue of carbon pricing prior to CBAM implementation in non-EU countries would render the CBAM increasingly redundant and less applicable to these sectors.