According to conservative estimates by think-tank Inter-American Dialogue (IAD) on 19 March, the sharp economic global slowdown due to the coronavirus disease 2019 (COVID-19)-virus outbreak will result in at least 3% contraction in US-origin remittances sent to Central American countries in 2020 versus the 2019 level, undermining domestic private purchasing demand, increasing demand for social services, and curtailing tax revenues urgently needed to fund economic rescue packages.

As of 1 April, there were 689 cases of the coronavirus disease 2019 (COVID-19) recorded in Central America, 1,378 in Mexico, but 216,721 in the United States. The latter is rapidly becoming one of the most affected countries, triggering lockdown measures and other restrictions and leading to a severe drop in US economic activity.

Remittance-sending groups are among the most vulnerable in the US, facing higher-than-average health risks and job precariousness. IHS Markit's latest forecasts predict that the US will face a 13% of GDP contraction in the second quarter of 2020, leading to a 1.7% of GDP contraction for 2020, with further downward adjustment still likely. This slowdown is likely to result in an unemployment rate approaching 9% by December as up to half of US jobs are at high or moderate risk of layoffs, reduced working hours, or wage cuts.

Honduras and Nicaragua are likely to be most affected by the contraction in remittance in 2020. The Inter-American Dialogue (IAD) stated on 19 March that the conservative scenario for US-sourced remittance flows would entail a 3% contraction to USD75 billion for 2020, down from USD77 billion in 2019, but that far worse outcomes are possible. The IAD noted that during the 2009 financial crisis, remittances dropped by 10% alongside an 8% increase in US unemployment. Honduras, with the highest remittance percentage of GDP of 20% in 2019 and Nicaragua, where remittances were the only positive macroeconomic indicator in 2019, appear most exposed and are likely to face fiscal pressures as a result of the projected reduction in remittances. American Chamber of Commerce of Guatemala (AmCham) President Juan Pablo Carrasco said on 23 March that remittance contractions are typically closely correlated with US GDP growth, suggesting that each percentage-point drop in US dollar GDP can translate into a 20-30% contraction in remittance flows, with significant implications for regional economic growth in Central America even before considering the impact of the COVID-19-virus spread. 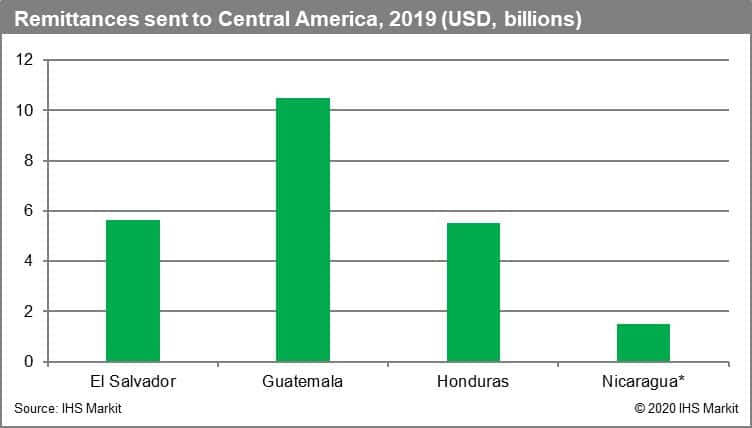 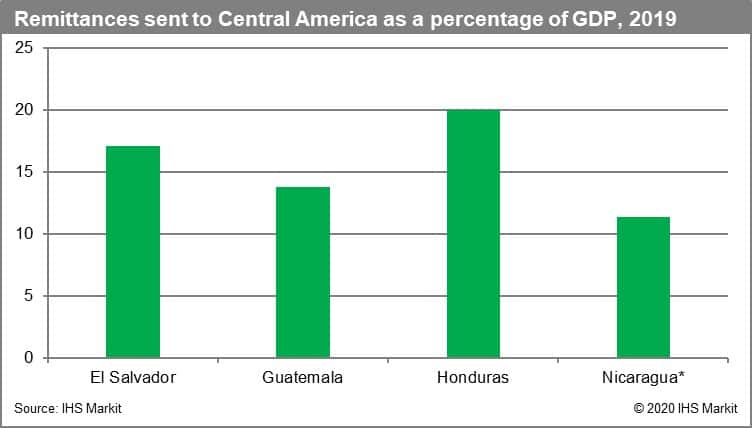 Worsening remittance flows coupled with a sharp reduction in trade and tourist earnings will increase fiscal demands on over-stretched government budgets. As the frequency and volume of remittances decline, Central America's receiving households face shrinking purchasing power for outlays on merchandise goods, telecommunications, and basic basket items, worsening revenue losses for domestic retail and services sectors and reducing value-added tax (VAT) revenues. All Central American governments, except Nicaragua, have already responded to indicators of substantial economic slowdown by developing economic stimulus plans involving increased fiscal outlays. The ability to pay even for existing government plans across the region will depend on the region suffering a relatively low COVID-19-virus-penetration rate, reducing the need for governments to expand public spending on healthcare services and to enforce lockdown measures requiring rapid growth in welfare outlays and help to the corporate sector. Ability to fund expanded fiscal outlays is also heavily reliant on additional loan approvals from multilateral lenders.