In 2020, CDS index return performance was extremely volatile in H1 as the Covid-19 pandemic unfolded. In the second half of the year, returns were considerably subdued, and attempted to recoup losses with mixed results.

CDS index volume activity was greater than usual in 2020, driven by the increase in trading as a result of the volatility in March and April. While returns were lackluster, the increased trading activity concurrent with volatility supported the case for CDS indices as instruments for price discovery and ease of market access. The high liquidity and the ability to easily trade CDS indices appealed to investors during choppy markets. This was most strongly visible in the untranched and tranched trading volumes.

Of the 11 credit events that took place in CDX HY in 2020, Noble Energy was the only entity to default in H2. The credit event occurred towards the start of the second half, determined by the ISDA DC on July 31. The iTraxx Crossover saw 4 credit events in 2020, all of them in H2, the last one being Europcar Mobility Group in December. 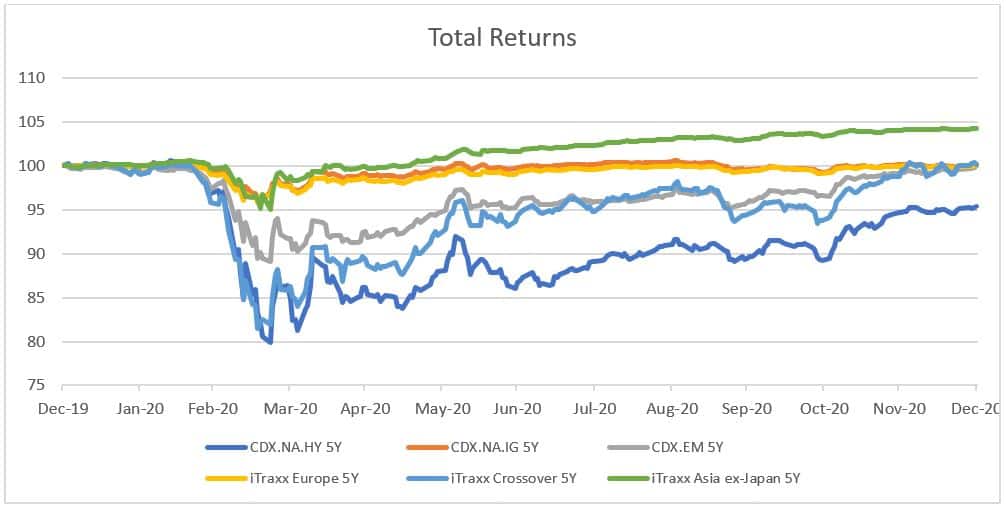 The index skew is calculated as the basis between the tradable index spread and a theoretical index spread, which is a weighted average of the spreads of the CDS single names that constitute the index. Due to their strong liquidity, the indices are widely preferred to express macro views, while the single names act as effective instruments to gain exposure to idiosyncratic risk or managing counterparty risk. This results in a natural tendency towards a negative index skew. In times of market stress, specific single names could experience a one-way market leading to excessive widening of names and driving up theoretical spreads if they happen to be index constituents.

The average skew across CDX IG and iTraxx Europe were -10 and -5 basis points, respectively. The index skews reached their lowest on March 24 for CDX IG, -62bp, and April 13 for iTraxx Europe, -21bp. The maximum skews were 1bp and 4bp, occurring on March 12. 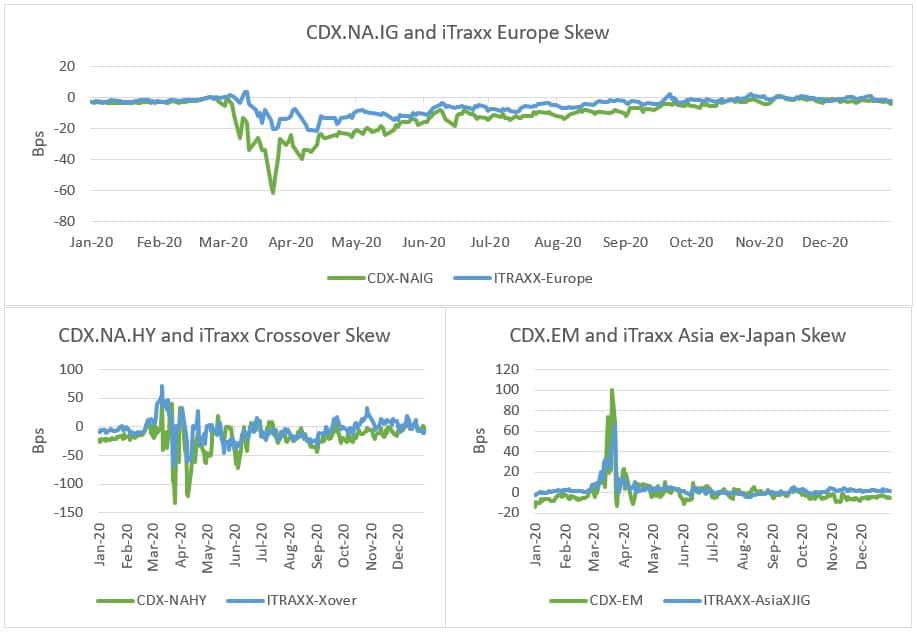 The CDS index curves give a good sense of how the market is pricing in near-term defaults relative to long-term defaults. For example, the 5s10s curve is calculated as the 10Y spread minus the 5Y spread. A decrease in curves due to the 5Y spread widening is an indication of a higher default probability in the near-term resulting in the 5Y and 10Y spreads being closer to each other.

CDX HY 3s5s was the only curve to average a negative skew for the year (-4bps), reaching a low of -171bp on April 9. It is worth noting that the on-the-run CDX HY index had a sizable 8 credit events occur in 2020. Curve volatility was especially high, scoring a maximum positive 72bp skew six days earlier on April 3.

iTraxx Crossover 3s5s also exhibited curve volatility, logging a minimum 29bp on September 4 and a maximum 72bp on March 20 and averaging 46bp for the year. 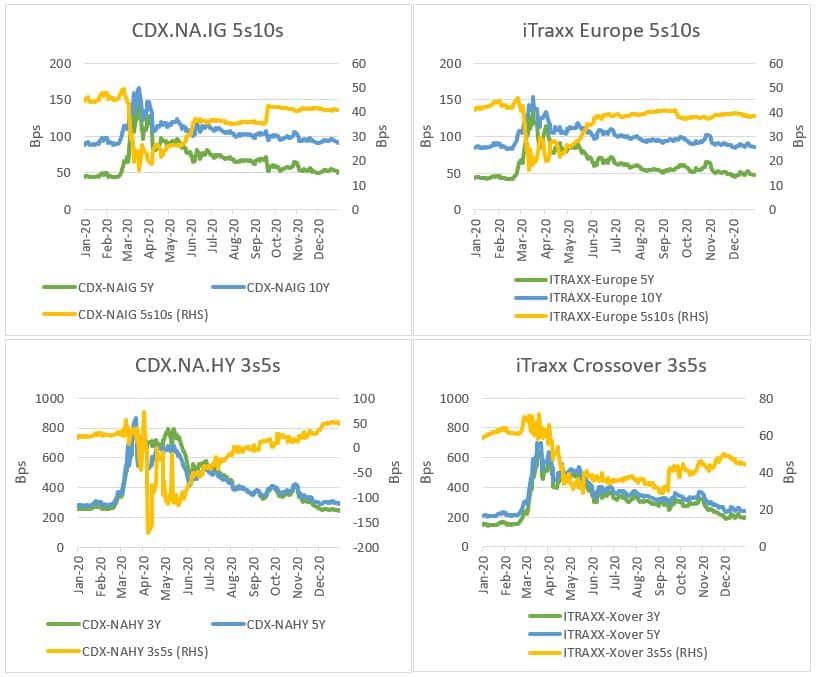 CDS index volumes in 2020 were higher than they have been in the last six years. CDS indices touched $25 trillion in notional traded in 2020, out of which about $15 trillion was in the first half of the year. The volatility in March and April drove up index volumes, resulting in a strong first half.

Unlike the untranched indices, CDX/iTraxx tranches roll only once in September, so prior to the September 2020 roll, the on-the-run tranches were on Series 33 for CDX and Series 32 for iTraxx. Tranches are most commonly traded on indices at the 5Y tenor.

On the IG front, the equity and mezzanine tranche spreads for CDX IG were wider than those of iTraxx Europe. However, the corresponding senior and super senior tranche spreads were narrower for CDX IG relative to iTraxx Europe. This could partly be attributed to the respective tranche sizes as the attachment points of standard senior and super senior tranches of iTraxx Europe are lower than those of CDX IG, implying smaller cushions protecting them. Across tranches on both indices, the spreads seem to have reverted to the pre-Covid levels in 2020.

Tranche spreads on the CDX HY index were especially unique owing to the string of credit events, mostly in the first half of 2020. The standard equity tranche of CDX HY index trades with attachment and detachment points of 0 and 15%, respectively. The losses from the 11 credit events in CDX.NA.HY S33 amounted to over 10%, largely reducing the cushion protecting the upper tranches. On the other hand, iTraxx Crossover, which only had 2 credit events in Series 32 prior to the September roll, suffered losses amounting to about 1.3%. The standard equity tranche of iTraxx Crossover index trades as a 0-10% tranche. 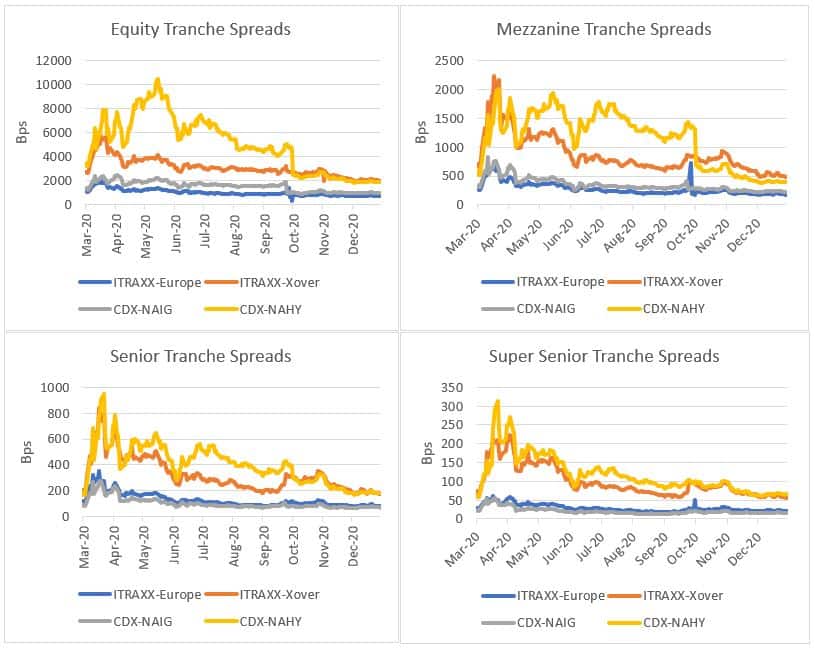 The year 2020 also saw a rise in CDX/iTraxx tranche volumes with over $270 billion in notional traded. As it can be seen from the chart below, there is a consistent upward trend in CDX/iTraxx tranche volumes over the last six years. The steady liquidity of the underlying iTraxx/CDX indices, especially in times of distressed markets, has supported the growth of non-linear products referencing the indices. Further, the level of standardization in the tranche market in terms of standard attachment/detachment points, coupons, and roll dates is also a contributing factor in the growth of the CDX/iTraxx tranche market.

In both IG and HY indices, the premiums for the payer swaptions were consistently higher than those of the respective receiver swaptions, reflecting a higher cost for downside hedging. This could also be an indicator of credit spread widening expectations, as receiver swaptions expire worthless when the index spread at maturity is wider than the strike level.

It is safe to say that in 2020 we witnessed one of the most uncertain years for credit markets in recent history. While the year was spent in the backdrop of the Covid-19 pandemic, there were also other notable events such as the US elections, Brexit negotiations, and vaccine developments to name a few, that made 2020 a unique year. The demand for liquid instruments continues to grow as we progress in 2021, and the range of CDX/iTraxx products offer market participants efficient and cost-effective tools to navigate exposure.