CCUS in the decarbonization of upstream production in Brazil

Petrobras has one of the three largest (if not the largest) carbon capture, utilization, and storage (CCUS) projects in operation around the world. The technology used by the company to remove carbon dioxide (CO2) in the natural gas production during enhanced oil recovery (EOR) evolved during the past 10 years, avoiding emissions of more than 22 million metric tons of CO2 (MMtCO2) to the atmosphere. The CO2 used for EOR also helps the pre-salt FPSOs to keep a much longer plateau of production.

The CCUS (Carbon capture, utilization, and storage) technology is quickly gaining a strong momentum following the rising consciousness of the need to mitigate the effects of greenhouse gas. But why has CCUS become so important?

Currently, most of the CO2 emissions come from the combustion of fossil fuels, especially for power generation. Renewable sources, which are considered the silver bullet to stop CO₂ emissions, respond for as little as 14% of the total energy supply (in terms of metric tons of oil equivalent), and most of that generated by the 150-year-old technology of hydropower generation, that accounts for 40% of all renewable energy generated. At the same time, energy demand keeps growing owing to population growth, improvements in the global standards of living, and adoption of high energy-demanding new technologies.

Fossil fuels will remain an important source of energy for decades to come. But how do we reach net-zero while keeping some usage of fossil fuels to cope with the rising global energy demand? The answer relies in in the adoption of a broad range of technologies. Among them is the CCUS - the group of technologies that can avoid the atmospheric emission of CO₂ from industrial processes that uses fossil fuels.

In Brazil, Petrobras' response to the decarbonization challenge was to remove the CO₂ from the natural gas production of its Presalt projects and to reinjected it in wells for enhanced oil recovery (EOR).

Since 2010, a total of 25 pre-salt fields were developed in the Campos and Santos basins, with CO₂ content ranging from 2% in the Marlim field to up to 44% in the Mero field. Currently, there are 29 units in operation with a combined gross gas production of more than 90 MMcm/d. Total CO₂ production of pre-salt fields reached about 630,000 metric tons in July 2021.

The membrane system is the technology chosen by Petrobras to strip the CO₂ out of the pre-salt fields' natural gas. The membrane allows a selective passing of the CO₂ molecules to a separate environment, removing most of the CO₂ of the feed gas. But not all molecules of the natural gas are blocked from passing with the CO₂, which means there is always a loss of natural gas with the use of membranes, and a huge pressure drop caused by flow resistance (the pressure can reach about 4 bar). After the separation, the high-concentration stream of CO₂ has to be compressed be injected into the reservoir. The deeper the reservoir goes, the higher the pressure of injection is required, reaching almost 550 bar, and the larger the compression system and the required power consumption.

The total current proved capacity of around 600,000 metric tons of CO2 captured per month across the several FPSOs operating in the area, is equivalent to approximately 7 MMtCO₂ per year. 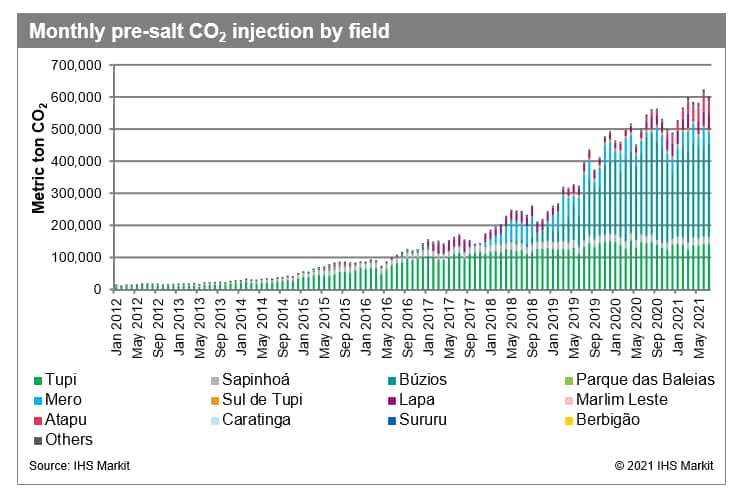 Two other CCUS projects stand out worldwide, both for EOR in the Permian Basin. Occidental Petroleum's Century plant removes 8 MMtCO₂ from natural gas processing. Shute Creek, an ExxonMobil facility, captures 7 MMtCO₂ from natural gas processing. This makes the Petrobras' Presalt development one of the three largest CCUS projects around the world. With more production units expected to come online, it is poised to become the single largest one in operation.