Caught in the middle: European gas in 2022

The European gas balance has been tightening through much of 2021 as gas demand has increased relative to 2020 and the loss of significant demand- and supply-side flexibility has pushed prices to new all-time highs.

Yet gas demand has proved very resilient in the face of these high prices. Looking forward to 2022, bullish demand drivers suggest further market tightness through the winter months—beyond what was previously expected—while prospects for incremental supply remain limited.

European gas prices increased threefold from early third quarter to end-November 2021, reaching levels five times higher than average fourth quarter 2020 prices. Yet what is striking is that, despite this jump, there has been relatively little impact on European gas demand, showing the limits to the price elasticity of European gas demand and the limits to fuel switching potential in the power sector. 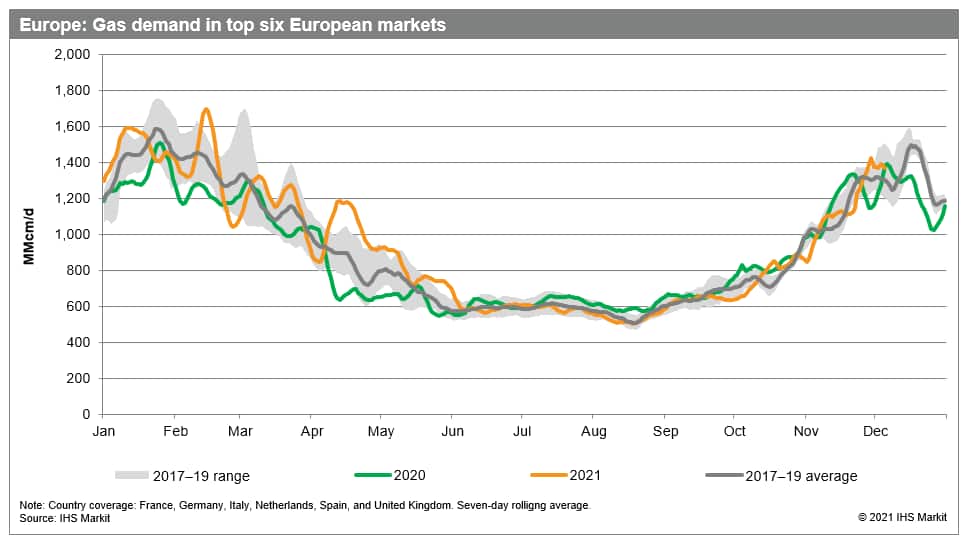 In the power sector, coal has become more economic than gas—and has therefore been dispatched ahead of gas. In other sectors, gas demand has proven resilient: third-quarter industrial demand was down only 3% year on year, while residential and commercial demand rose by 9%. The announced factory curtailments over third quarter from various industrial subsectors and plants—most notably for fertilizer and methanol—turned out to not affect total gas demand materially. What is more, certain plants are already scheduled to come back online in the current price environment.

Extra supply from Russia is uncertain

Since October—the start of the "gas year"—there has been a significant step-down in Russian pipeline imports, spooking markets. Russian pipeline flows to Europe had remained on par with 2020 levels from January to October this year, covering contractual obligations to European buyers, but little else, judging from the volume of flows and the lack of sales taking place on Gazprom's Electronic Sales Platform (ESP). However, flow volumes declined with the start of the new gas year on 1 October, with average daily flows falling to 322 MMcm/d in October and November from an average level of 393 MMcm/d for April-September.* 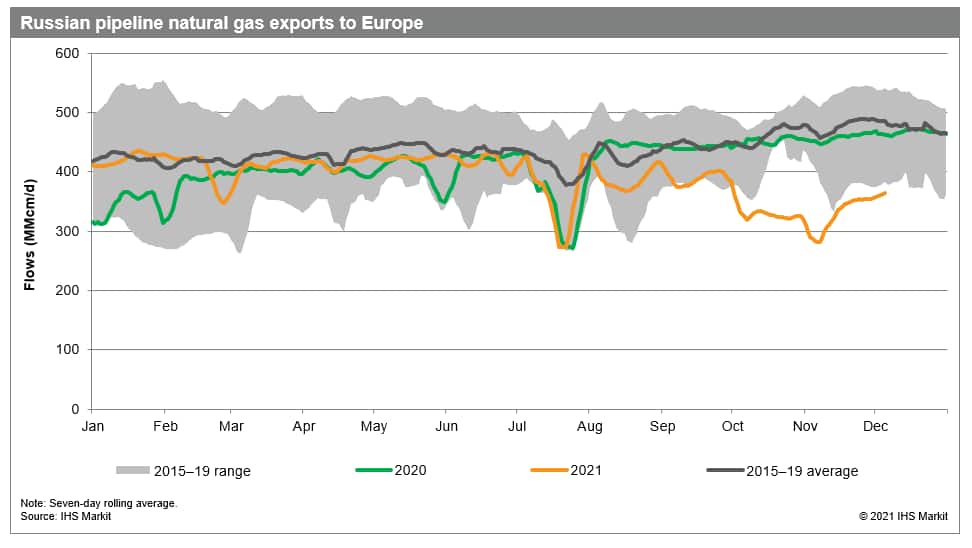 Furthermore, on November 16, 2021, the German energy regulator temporarily suspended the regulatory certification process for the Nord Stream 2 pipeline project, saying that Nord Stream 2 AG, a Swiss entity, must establish a subsidiary in Germany to own the portion of the pipeline that lies in German territorial waters. Practically, this delays the certification process of the pipeline, including the regulator's deadline to issue a certification decision, the subsequent review by the European Commission, and the final decision by the German regulator. IHS Market estimates that this could push final certification as late as September 2022.

Given this picture, and subject to uncertainty about buyer nomination levels, IHS Markit does not expect significant supply-side support to the market through the current winter or, indeed, into the spring.

Coming into winter 2021/22, European storage facilities are in a far less favorable position than last year, with storage fill peaking at about 80 Bcm in late October—compared to 98 Bcm in 2020—and turning to net withdrawals since then.

IHS Markit was previously forecasting Title Transfer Facility (TTF) prices to start weakening markedly from the second half of February 2022, continuing their descent in March and falling back within the coal-gas switching range at the start of second quarter.

However, a delay in the fall in prices back toward historical benchmark levels is looking increasingly likely. Given how supply and demand dynamics are now expected to play out for the current winter season, European prices are more likely to remain at current high levels—unanchored from power sector fuel competition dynamics—for longer and to remain highly volatile through first quarter 2022. In the absence of significant supply upside, it seems increasingly likely that downside price pressure will be delayed to end-winter.

The combination of storage fill requirements at the end of winter 2021/22 being higher than previously expected and the limits to supply upside points to summer 2022 prices at TTF being about 25% higher than previously forecast. With bullish pressure on prices through summer, subsequent winter prices are set to peak above the coal-gas switching range, again breaking above a historical ceiling benchmark.

* These figures have been converted to standard cubic meters, which IHS Markit defines to have a gross calorific value of 11.0485 kWh (calorific content 9,500 kilocalories per cubic meter), measured at 15 degrees Celsius.

Schedule 1-1 time with our natural gas market experts, or ask a complimentary question.