A marked divergence between GDP and PMI numbers in 2017 fueled speculation that the latter were sending misleading signals. The PMI numbers were climbing close to all-time highs during the year, and indicating considerably faster euro area economic growth than was being estimated by the official GDP data available at the time. However, revisions to the official data mean that we can now see that the PMI was in fact accurately prescient in predicting impressive GDP growth in 2017, repeating a pattern of the PMI tending to provide more accurate signals of actual economic conditions than the initial GDP estimates.

Forecasters that relied on the early GDP estimates consequently underestimated the strength of the eurozone economy in 2017. 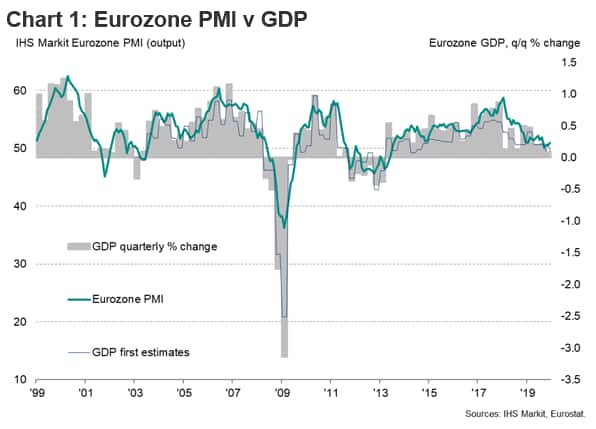 To illustrate, in early 2017 the PMI was signalling a strong upturn in the Eurozone, boding well for an impressive year of economic growth.

Our PMI model - based on a simple OLS regression - pointed to a 0.64% GDP rise in the first quarter of 2017. The preliminary flash estimate from Eurostat merely showed a 0.46% gain. However, this has since been revised up to 0.65%, representing an upward revision of 0.18% and in line with the PMI signal.

Similarly-large upward revisions were seen in the second half of the year, bringing the GDP data closer to the implied GDP expansions signalled by the survey.

Over the year, the survey data indicated an average quarterly GDP expansion in 2017 of 0.74%, which is almost exactly in line with the average of 0.76% for the revised GDP numbers (against an average initial estimate of 0.54%).

As a result, the GDP data now show the eurozone economy to have expanded by 2.8% in 2017, which was the best performance since 2007. However, such robust growth was not anticipated by many forecasters even during the second half of the year due to the disappointing early GDP estimates. The IMF, for example, was expecting full year growth of just 1.7% in its July 2017 outlook.

While it was the divergence between the survey data and official GDP data in 2017 which caught much attention among economists, prior years had also seen many examples of the PMI providing a more reliable guide to final GDP data than the official early 'flash' GDP estimates from Eurostat (see chart 1).

These properties of the PMI were also reported in a European Central Bank staff research paper, which concluded that "these findings imply that PMI surveys are not only valuable for analysts and policymakers as a timely and reliable GDP tracker, but also for statisticians to potentially improve the accuracy of the first preliminary flash estimate of euro area real GDP."

The revisions in the GDP data depicted in chart 1 are shown by the bars in chart 2, overlaid with the advance signal from the PMI survey of the extent of the likely revisions. There is a clear relationship with the official early estimates tending to understate growth during periods of expansion and overstate during periods of decline (or when the economy is entering a period of decline). 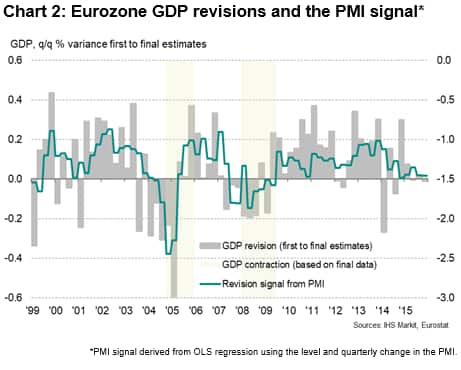 #Japan flash #PMI showed a renewed downturn in private sector activity in January with the flash composite output i… https://t.co/knGarcp9s0

Flash #PMIs for January will be released next week while central bank meetings in the US and Canada unfold. Preview… https://t.co/WVzf9x2bmI