Capital inflows have returned to Turkey, but remain precarious

In October 2018, Turkey attracted a net inflow of portfolio capital for the first time since January. Although the net inflow was modest - just USD491 million - it nonetheless represents a key, potential inflection point after the country lost a total of USD8.702 billion in net portfolio outflows from February-September 2018. The strong shift of global sentiment towards developed markets, combined with self-aggravated lack of investor confidence in Turkish economic policy-making sent portfolio investment rushing out of the country during most of 2018. After a sharp hike to interest rates, a tightening of monetary policy, and promises of stabilization measures - including scaling back fiscal stimulus - has helped to recapture capital inflows. 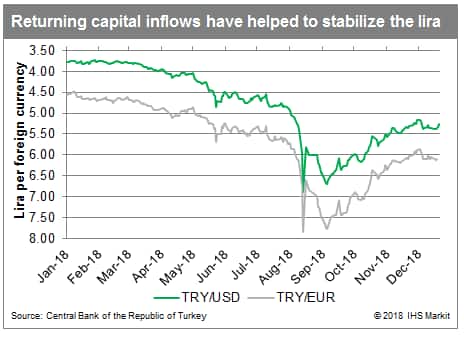 The return of capital inflows helped to buoy the value of the lira. From 24 September to end-October, the lira regained 12% of its value against the US dollar. Continued lira gains in November suggest that portfolio investment remained inward on a net basis that month. By 3 December, the lira had reached 5.162 per US dollar, nearly 18% stronger than it had been as of late September. So far in December, the lira has fallen back somewhat, likely in anticipation that the Central Bank of the Republic of Turkey (TCMB) would decline to raise interest rates at its 13 December meeting. With the TCMB following through on expectations and keeping interest rates unchanged, the lira has remained stable, at a slightly weaker level, in the week since.

Improving net inflows of capital have gone hand-in-hand with the country's recent success in the international capital markets. Banks have been increasing their capital buffers, attracting willing partners. Banks have also been successful in rolling over their external debt obligations, albeit at elevated costs. Sovereign debt sales have been well subscribed, raising USD7.7 billion in 2018 as a whole, nearly half of which within the last month. Bond spreads - having soared in August-September - have re-narrowed significantly in October-December.

Meanwhile, the current account balance has turned around. Turkey posted a current-account surplus for the third consecutive month in October. Depressed domestic demand due to weaker buying power, higher interest rates, and lack of business confidence have severely curtailed imports. In the period August-October 2018, total merchandise imports plunged by 21.2% year on year (y/y). Service imports have also dropped sharply in recent months, down by 11.3% y/y in the most recently reported three months. The strong y/y improvements since August have finally pushed the cumulative current-account deficit below what it had been a year earlier. 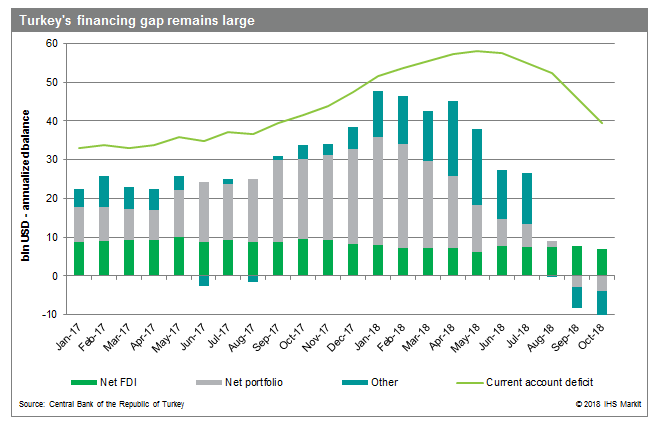 Even with the rapid turnaround of the current-account balance - we are now forecasting a current-account deficit of only around 2.5% of GDP in 2019 as a whole -- and the return of net inflows of portfolio investment, Turkey has substantial external vulnerability. On an annualized basis, the financing gap between net capital inflows and current-account deficits is yawning. The financing gap must be met through a combination of errors and omissions, new borrowing and drawing down what are already depleted reserves. By end-October, total foreign currency reserves were more than USD20 billion down from where they had been at the end of 2017, covering only 3.8 months of imports.

While the return of capital inflows in October may be an inflection point, with modest net inflows expected to continue throughout 2019, downside risks to overall stability remain substantial. Given a low level of international confidence in the country's economic policy-making, another crisis could once again trigger instability. The just-announced US withdrawal from Syria that may reignite regional violence; a major US fine against the Turkish banking sector; and the Iranian sanctions are all potential triggers. Of greatest concern, though, is with the country on the verge of a recession, President Erdoǧan may be tempted to abandon stabilization policies in pursuit of stimulating growth, launching another crisis. As the US Fed continues to raise its rates and the TCMB holds its rates unchanged (or begins to lower them at the direction of Erdoǧan), the potential for destabilization increases.