Slower economic growth in sub-Saharan Africa and limited progress in fiscal reforms have contributed to governments struggling to manage increased external debt burdens. We review key indicators of foreign-currency shortage, using these to identify countries at greater risk of re-imposing or expanding capital controls to defend their weakened currencies and to protect scarce foreign-exchange reserves. 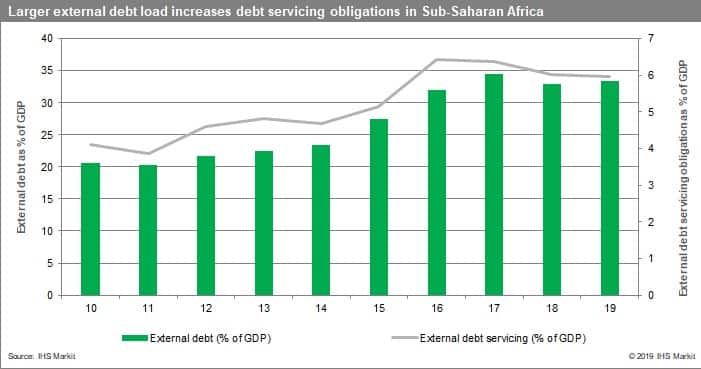 Early financial stress indicators include a significant drop in a country's Bank for International Settlements (BIS) liabilities when compared with the BIS asset ratio. BIS assets consist primarily of loans, money-market and foreign-exchange ('FX') lines, and other credits provided to the host country's banks, while BIS liabilities consist primarily of FX cash on deposit with BIS banks, which is owned by the host country's banks and can be drawn at any time. BIS FX deposits with outside BIS banks are held for three important reasons:

Such risks are mitigated in countries benefitting from an International Monetary Fund (IMF) support programme or which will soon have access to one. Countries (outside the CFA franc zone) such as the Democratic Republic of Congo (DRC), Eritrea, Ethiopia, Liberia, Sudan, Togo, and Zambia have weak foreign-reserve levels, well below three months of import cover, indicating a greater risk of capital controls. In Zambia, the lack of fiscal consolidation exacerbates foreign liquidity pressures. Facing severe portfolio outflows, South Africa could introduce a dual exchange-rate system, establishing a 'financial rand'. Ethiopia and Zimbabwe are among other candidates that could introduce more capital controls.

Those countries at greatest risk of needing to maintain or expand capital controls share one or more characteristics. Several countries, such as Angola, Equatorial Guinea, Gabon, Nigeria, and Zambia, have not effectively advanced sectoral diversification, with export revenues still being derived largely from a single commodity, such as copper or crude oil. These economies are, therefore, exposed to downturns in commodities markets, increasing pressure to implement or expand capital controls. Other factors contributing to this risk are large external public-debt burdens, such as in Congo, Gabon, and Zambia, and excessive servicing costs relative to available foreign-currency reserves, especially where debt obligations are collateralised by key foreign-exchange-earning exports, such as in Angola. In commodity net importing economies, it is the centrally controlled and highly state-owned economy that has caused a structural balance-of-payments deficit, reflecting the historically large outlays for public infrastructure projects.

A common theme is the failure during the past period of growth to undertake budgetary reforms to manage external balances and reduce debt distress prudently. Counterbalancing this, a consistent risk mitigating factor is the existence of an ongoing IMF programme that enables central banks to ease liquidity pressures by accessing official lending rather than imposing capital controls. Membership to a Common Monetary Area (CMA), as with Cameroon in the CFA franc zone, is also a mitigating factor as members can access a reserve pool in times of financial distress. However, CMAs are prone to implement bureaucratically inefficient and costly foreign-exchange regulations that prevent timely access to foreign currency. At the country level, political support for capital controls is also a key determining factor, with those countries more likely to support controls, such as South Africa, typically also being characterised by an adverse and/or uncertain policy outlook that deters private-sector investment while increasing the risk of capital and portfolio investment outflows.

A full version of this special report , with deep-dives into six key sub-Saharan markets, is available to our clients on the Connect platform. If you are not a current client, you may request a sample or you may purchase the full study.