At the end of September, Capesize timecharter rates have increased by 85% to about $75,000/day from about $40,000/day just three weeks ago. Specifically, C5 (Australian iron ore to China route, 170,000mt) freight rates increased from about $12/ton(8/Sep) to about $23/ton(29/Sep). The increase has almost doubled up within less than one month and Australian miners need to pay about $1.8 million more per Capesize shipment compared with the rates before the Mid-Autumn Festival, according to Baltic Exchange.

We believe this dramatic increase in the Capesize rate has been primarily due to the tightened supply of vessels owing to high congestion in the Pacific and limited ballasters in Atlantic while the recovery in Brazil's iron ore shipments and strong coal demand also play a role in the current strength in freight rates. Our forecast models consistently predicted the strength in Capesize rates over the last few weeks and recently available signals have indicated freight rates to remain strong in the short term. (See previous article: Capesize market will overall remain strong in the coming months despite China's steel production curb, 20 August 2021) However, we still remain cautious toward the end of the year as downside risk remains in iron ore demand from mainland China, potential loss in coal market share to the Panamax sector, and expected decline in congestion as vaccination rollouts progress.

Initially, two weeks ago, strong Atlantic mineral chartering demand against limited tonnage helped to support the Atlantic rates. For example, on 10 September, the Baltic C8 (Capesize Atlantic Round Voyage rates, $/day) reached about $60,000/day after spiking almost $10,000/day in single day, whereas Pacific remained at the level of about $40,000/day. Therefore Pacific and Atlantic round voyage earnings spread has increased to 50%, equivalent to more than $15,000/Day.

While the higher regional freight spread environment has continued, Capesize congestion in China sea has rebounded again in recent weeks following typhoon Chanthu, and this reduced the number of open tonnage out of mainland China. The combination of competition and limited prompt tonnage, triggered Australian miners to pay up almost twice more than their early September rates in the Pacific in order to secure tonnage for their October shipments. They had to match the Atlantic rates to attract tonnage before committing ballast. Moreover, there has been a lot of speculation on the negative impact with the news of steel production cuts in mainland China and the Evergrande default rumors. With unexpected spike in freight rates, many short position players either in FFA or physical have no options but to cover their short position in FFA market or secure tonnage to cover their cargo requirement, triggering more upside demand in the short-term.

From demand perspective, Iron ore shipments this year have been in line with seasonality (see chart 4). The third quarter and early fourth quarter are normally the seasonal peak in Brazil, Canada, and South Africa; thus, volume of iron ore exports will remain strong in coming weeks. Also, coal shipments are expected to remain strong both in Europe and Asia, with extremely high natural gas prices and low level of stockpile around the world. From a supply point of view, prompt tonnage supply from mainland China remained limited with ongoing congestion. Also, stronger Australia chartering demand has reduced ballasters towards Brazil and this would trigger another spike in the Atlantic region. Therefore, strong iron ore and coal shipments along with limited available tonnage both in Pacific and Atlantic will continue to support current high freight rates in the short-term.

However, we remain cautious toward the end of the fourth quarter of 2021 and do not foresee the recent momentum in Capesize freight markets to last longer.

IHS Markit freight forecast models predict October would be the peak of 2021 based on several downside factors (a) with the Beijing winter Olympic games in early February, we believe mainland China will try to concentrate the steel production cut leading up to this period; (b) with Capesize freight rates becoming more than twice that of Panamax vessels, we should begin to see more of the increased coal cargoes being performed on Panamax tonnage especially with slower demand from grain side; (c) and most importantly, the expected decline in Capesize congestion with a recovery in moored operations would reduce premium caused by prompt tonnage tightness.

From a technical perspective, if the freight trend followed historical movements, after initial short-covering driven spike, C5TC would face resistance of previous peak in 2009 ($90,000-100,000/day) or C5 ($25-26/ton), and then it could drop again with profit taking movement from FFA players as well as shipowners and operators as the current very high spread between C5TC and P5TC is not sustainable. (see chart 1)

IHS Markit maintains the view that there is still upside potential in the short term with many signals pointing to better demand and supply balance with tonnage tightness, mainly due to high congestion in mainland China and limited Brazil ballasters, while downside risk remains in the medium term with weaker economy and commodity sector demand signals along with expected decline in congestion. 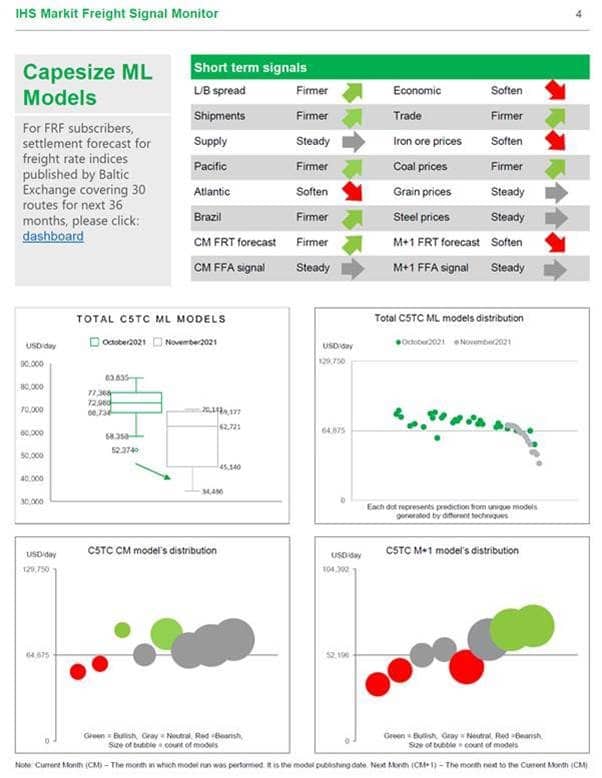 For more information on the product used in this analysis: