The Cannabis sector has been on fire of late, with an average share price appreciation of nearly 30% since the start of August for US and Canadian stocks with exposure to the sector, despite the pullback on Thursday. Those stocks currently have a market capitalization of $48bn, having increased by a staggering $20bn since the start of August. The combined market capitalization hit an all-time high of $51bn on September 12th. 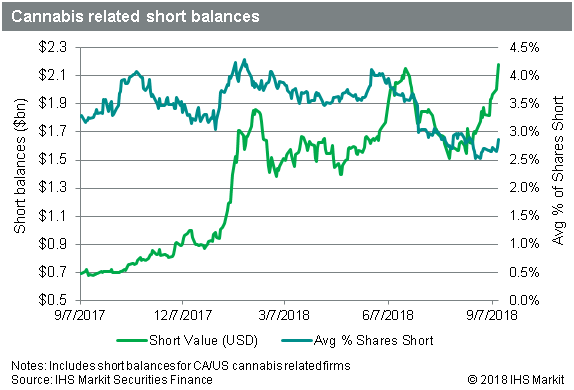 The rally in Cannabis stocks has been celebrated by those who own the stocks; however, it's been a tough run for short sellers in the sector, who had been reducing exposure to the space from $2.15bn just following the Canadian legalization vote in mid-June, to $1.5bn at the end of July. The reduction in short balances was partly the result of share price decline, though the average percent of shares short also declined during that period, from a 4% peak in mid-May to 2.7% at the end of July. Since then the rally has driven the short balance to a new all-time high on settlement for September 13th, $2.2bn.

The largest contributor to the recent increase in market cap was Canopy Growth, shares of which have nearly doubled following the announcement of a further $5bn investment by Constellation Brands. Investors in Constellation Brands were less impressed, with STZ share price declining nearly 10% in the days following the announcement, though they've since recovered three quarters of the initial drop. 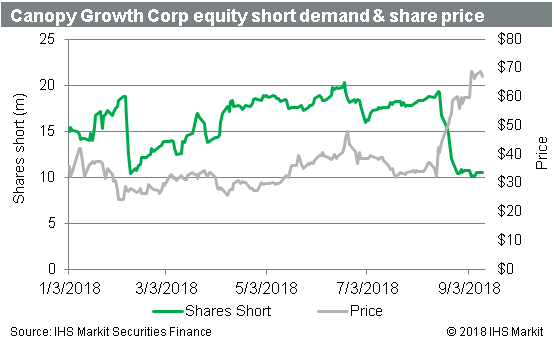 Short sellers have become, understandably, reticent remaining short the industry leader. Since the start of August there has been a 7.6m share decline in Canopy short positions.

Tilray Inc has been the hottest stock in the sector in recent weeks, with the share price increasing more than 300% from the start of August. It's also been popular with short sellers, with Citron Research initially coming out with a long call on the stock on August 15th with a price target of $45/share, a mark it soared past less than two weeks later. On September 4th, with the share price at $77, Citron announced they had switched sides and were shorting the stock. That call hasn't worked quite as well, with the share price up a further 50% since then. Citron put out a follow up on September 12th, citing the view that the recent rally in the Cannabis space is being fuelled by US retail investors. 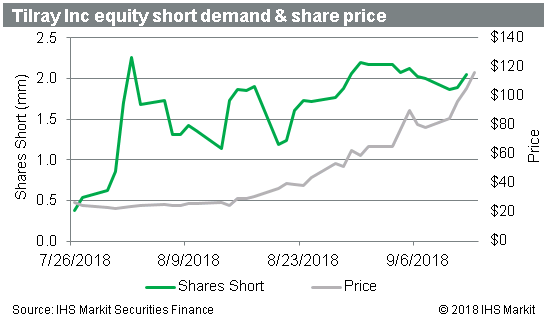 Part of the problem for short sellers has been a lack of lendable TLRY shares, which they could borrow and short. The current short position is only 2m shares, however, that has fully utilized the supply from institutional lenders. Retail brokers and other holders are currently able to command triple-digit borrow fees, which are typically only seen in similar post-IPO situations where the borrow is constrained by limited float. When the lockup period for affiliated parties ends, the firm decides to issue more shares; or, if the trading volume becomes less frantic, it will be easier to source borrows and short sellers will be able to short in larger size and with lower borrow fees. What that will mean for the price remains to be seen, but so far, it's been a bonanza for shareholders who have seen massive share price appreciation along with borrow fees which are high enough to be meaningful over short holding periods. There is little evidence that short covering has played a role in the upward trajectory of the shares, with the current short position being trivial compared with over 100m shares traded since the start of August.

While short sellers have maintained roughly the max position size in TLRY, they've actively added to other positions, including Aurora Cannabis, which was among the more expensive to borrow in the space before considerable issuance of new shares, particularly those relating to the MedRelief acquisition, made borrowing shares easier.

On the other side of the coin, Canopy Growth isn't the only stock with declining short positions amid the rally. Aphria and Scotts Miracle-Gro also remain among the largest nominal short positions despite active reductions in shares short.

Overall short sellers aren't fleeing the space, despite the massive rally. There have been selective additions to short positions, accompanied by reductions elsewhere. The acceleration in short balances has been primarily driven by share price appreciation; however, the decision to not cover those positions is anything but passive. Recent performance doesn't appear to be a key driver behind trading decisions with the stocks seeing the largest increase in shorts having a substantially similar recent increase in share price as the stocks with decreasing shares short, Tilray notwithstanding.