Several new events are set to have some implications on propane, butane, and condensate in 2019. With continued development of the Montney and other shale plays in western Canada, supply of associated NGLs is expected to rise throughout 2019. Barring a further collapse of the oil prices during the year, we expect focused condensate-rich gas drilling to dominate the area in the coming year.

The western Canadian propane market has experienced some drastic changes over the past five years. From the price highs of 2014, to the negative prices of 2015, to the tempered expectations of new demand projects coming within the next decade, propane producers have been on a wild ride (see Figure 1). 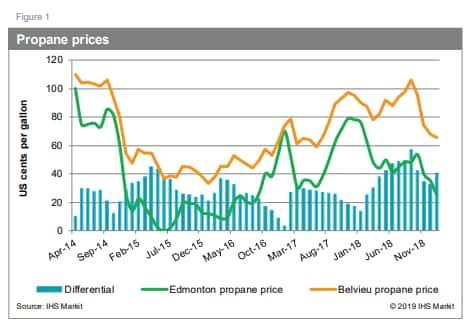 Propane prices were at extremely high levels through 2014, owing largely to the price of crude oil. In 2014/15, not only did the oil price crash keep propane prices under pressure, but it was also combined with the growing US propane production from shale gas and the loss of the key export pipeline at the time, Kinder Morgan's Cochin pipeline. This pipeline, which previously moved western Canadian propane to the US Midwest, was reversed to move condensate from the United States into Canada for use as diluent in the oil sands. This action made rail the only form of market clearance for propane out of western Canada. In the short term, rail logistics were unable to keep up with supply combined with high inventory levels of propane, causing prices to plummet and at times during summer 2015 trade at a negative value. This result means that producers were paying midstream companies to take propane off their hands.

This fact prompted the western Canadian midstream companies to look at several new sources of demand for propane, such as petrochemical plants and offshore export terminals as opposed to having to sell into the United States at a discount via rail.

There have been two combined propane dehydrogenation plants and polypropylene facilities announced in Alberta over the past 14 months, one by Inter Pipeline Limited and one by the Canadian Kuwait Petrochemical Corporation, which is a JV between Pembina Pipeline Corporation and Kuwait's Petrochemical Industries Company. Both facilities have taken advantage of the Alberta government's Petrochemicals Diversification Program, which grants royalty credits totaling C$500 million between the two facilities. Although these facilities will not be operational until 2021-23, they are influencing the planning of other new projects.

IHS Markit will be watching the western Canadian price for propane once the AltaGas export terminal is operational, although we expect the near-term price impact to be minimal with an excess of more than 100,000 b/d currently being moved to the United States. We expect some tightening of the differential to Mont Belvieu and Conway once the combined impact of all these new demand projects is felt.

Canadian NGL producers have long been able to depend on butane as the one part of the NGL stream that would consistently have a positive netback. That all changed in late 2018, with butane prices collapsing to historical lows, even attracting offers of $0.00 for several days in November (see Figure 2). 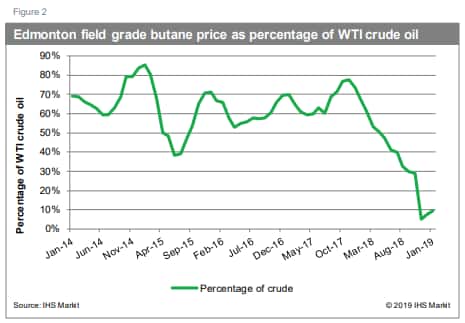 Prices as a percentage of WTI crude, which is an industry method of measuring prices, fell all the way to average only 6.7% of crude in November. Prices have recovered slightly and are averaging nearly 10% of WTI crude values in early 2019. However, this is normally the heavier demand season for gasoline blending, so prices should be higher than they could be this summer.

Looking at pricing another way, as a differential to Mont Belvieu prices, the disconnect started in March 2018, shortly after the end of the traditional gasoline blending demand season (see Figure 3). The differential peaked in November at 77 cents per gallon (cpg) and is now averaging nearly 68 cpg in early 2019. 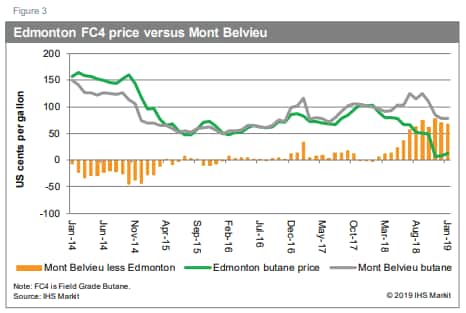 The price collapse has largely been a factor of increasing butane production combined with the inability to load enough via rail to be able to effectively clear the market. Rail service for all commodities in western Canada has been an ongoing issue for some time now, with smaller LPG shippers not a priority for the railroads versus longer-term crude-by-rail contracts that had been signed for firm unit trains of product. Keyera's Alberta EnviroFuels plant shut down in late 2018 as well for some maintenance, which only exacerbated the situation since that plant is a key user of butane in the Edmonton area. It is since back up and running normally. Inventories remain high in western Canada coming into 2019, and the hope is that more rail movements will be able to successfully clear the Edmonton area of excess butane. However, price recovery will take some time, most likely into 2020. Producers are looking for midstream companies to simply guarantee takeaway, with price being a secondary consideration during this year's contract negotiations currently ongoing for the new contract year beginning 1 April.

The condensate market in western Canada was on a wild ride in the latter part of 2018, and there is considerable uncertainty going forward. The Alberta government has taken the extraordinary step of mandating a production curtailment in 2019 for crude oil.

Owing to pipeline constraints, a heavy refinery turnaround period, and increasing heavy oil production, the differential between WTI and WCS crude oil plummeted to more than $50/bbl on 11 October 2018 compared with the annual average of $12/bbl in 2017.*

This differential caused the Alberta government to mandate a production curtailment in early 2019 of 8.7% of current production, or 325,000 b/d in the first quarter of 2019, with all operators allocated a 10,000 b/d base exemption.

The price response to the curtailment was rapid, and prices have recovered to average approximately a $9.00 discount so far in 2019. The Alberta government has now reduced the curtailment amount by 75,000 b/d for February and is watching the market and will adjust this curtailment as needed.

All of this curtailment has had a drastic impact on the price of condensate, which is used for a diluent in heavy oil so that it can be transported in pipelines to market. When the heavy oil differential widened in late 2018, condensate prices soon followed as heavy oil producers had no choice but to push back on the price of diluent to keep netbacks at a reasonable level. Condensate in Alberta has historically traded at a slight premium to WTI crude oil. Prices for condensate began to trade at a slight discount in April 2018, largely owing to increasing domestic production of condensate in Canada (see Figure 4). 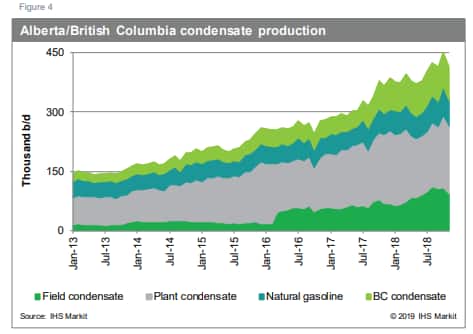 This discount widened in the summer to nearly $4.00/bbl, but the real hit was in the fall, when this number reached $16.50/bbl in November as uncertainty in what a production curtailment would mean for the demand for diluent impacted prices. Once the curtailment was in place, the condensate price settled near a $2.75 discount to WTI crude for January (see Figure 5). 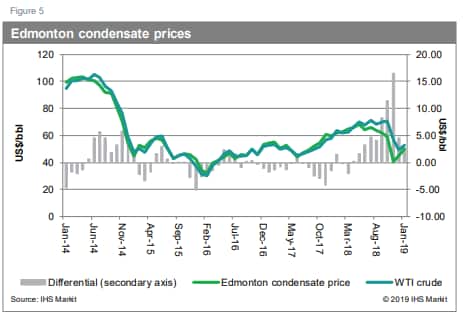 Domestic condensate production growth will likely be tempered in 2019, largely owing to capital budget cuts brought on by most Canadian producers in response to the lower crude prices in the latter half of 2018. This result could bring a slight reprieve in the condensate discounts, at least in the short term, as heavy oil production continues to provide the required demand for diluent. Growth in that demand may pause in 2019; however, several expansions are still expected in late 2019 and early 2020. Large-scale growth in western Canadian crude production continues to depend on new pipelines being built to help the lack of pipeline availability in western Canada.

There may be more changes on the horizon for NGLs in western Canada as the second part of the Alberta government's Petrochemicals Diversification Program is close to awarding more incentives to industry for new projects in the NGL extraction and petrochemical space. The most notable projects would be a new ethane cracker and ethane extraction facilities, which would impact the ethane market in Alberta. Successful applicants for these incentives are expected to be announced in the next few weeks. A total of 23 projects were submitted to the government for consideration.

* WCS is Western Canadian Select and is a price marker for heavy crude blended with diluent in the Edmonton area.

Increasing the voltage standards for #PV systems has been a critical driver of reducing the levelized cost of energ… https://t.co/KYwzR2sfEv

The Renewable Fuel Standard program for #biofuels has reached a crossroads, where proponents of #lowcarbon fuels ar… https://t.co/uHTFgSt6m7