Canadian merchandise trade surprises with a surplus in January

This was the first substantial international merchandise trade surplus for the Canadian economy in over six years. Stranger is the fact that it happened during a month of renewed regional restriction measures. This was expected to be a challenging time for the Canadian economy and for some exporters it probably was challenging. For example, exports to the European Union fell 52% month-on-month (m/m). However, Canada benefited from surging US demand, as their manufacturing sector continues to see growth, large stimulus packages have been passed through government, and vaccination efforts accelerate.

While exports saw some transitory distortions, the overall strength of exports cannot be dismissed. Statistics Canada highlighted a one-off sale of used aircrafts to a US airline, leading to a 72.3% rise in exports within the aircraft and other transportation category. Exports of consumer goods rose 11.5% m/m as large sale of gold bars was made to US retail investors. Within the forestry and building material category, both building and packaging materials and lumber and other sawmill products export sub-categories continue to benefit from the strong housing market in the US, rising 16.5% m/m and 30.4% m/m respectively. Moving in tandem as of late, these sub-categories have seen growth in 10 of the last 12 months. In particular, the value of lumber and other sawmill exports is at a record high and more than double year-ago levels. This strength continued despite US housing starts easing in January due to unseasonably cold temperatures. Strong Canadian lumber exports are also benefitting from record high prices caused by sawmill shutdowns during the first wave of the pandemic. Export of energy products also rose a healthy 5.9% m/m, as demand and prices also continue to rise. Excluding the two categories distorted by one-off effects, exports values were still up 4.8% m/m. 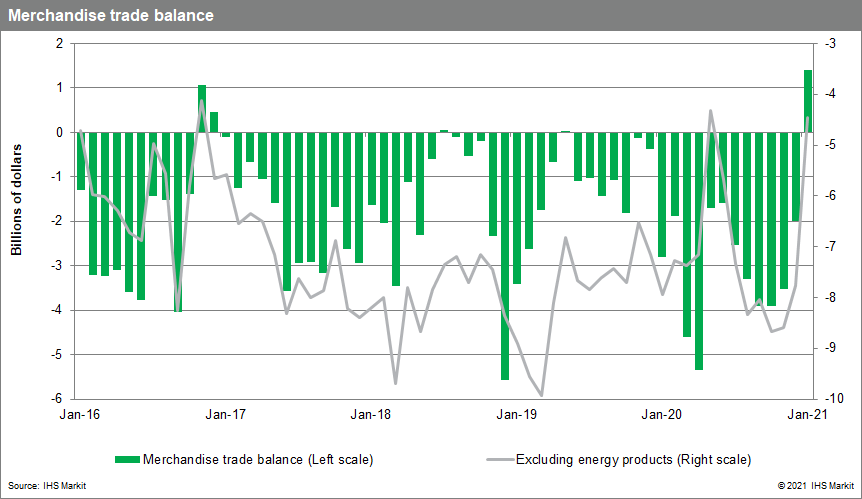 Helping with the trade surplus was more modest growth in imports, with value growth in seven of the 11 product categories. The 20.5% jump in energy imports—breaking three months of declines—was offset by decreases in aircraft and other transportation, motor vehicles and parts, and consumer goods. It is also worth noting that the deficit in international services trade widened to USD236 million but has remained well below the typical service trade deficits seen prior to the pandemic. The small surplus within travel services will continue until travel restrictions lift and consumers are comfortable traveling abroad again.

Demand for Canadian exports continues to benefit from a rapidly expanding US economy and an uplift to oil and lumber prices. Strong IHS Markit US Manufacturing PMI readings continued in February which bodes well for Canadian exports. Since we cannot count on similar one-off boosts to exports in future releases, net trade will remain a drag on Canada's real growth this year but is expected to add to 2022 growth.