As countries transition away from using carbon-intensive energy resources, low-carbon hydrogen is expected to be an important energy source for difficult-to-electrify industries.

An ongoing trend over the past several years has been for governments around the world to set targets for low-carbon hydrogen use throughout the energy sector. In 2017, Japan became the first country to adopt a national hydrogen strategy, which estimates demand for hydrogen to reach between 5-35 million metric tons per year (MMt/y) by 2050. Since then, several countries across Asia, Europe and North America have released their own targets for low-carbon hydrogen-use. 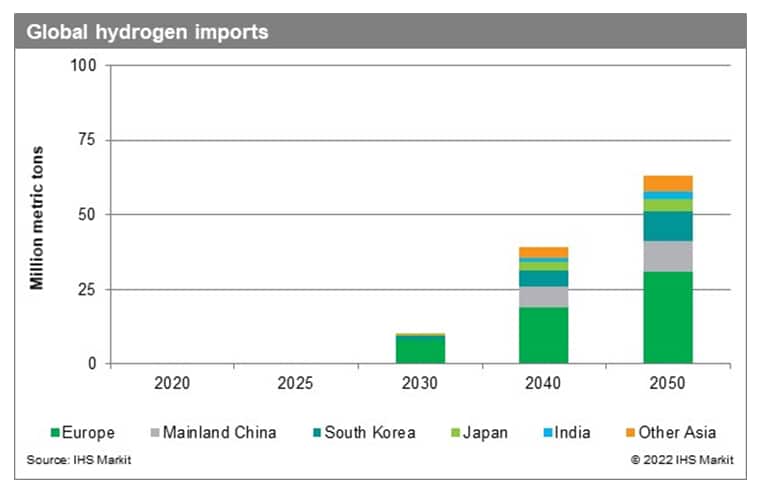 Canada is one of the largest global producers of hydrogen and is expected to be able to produce enough low-carbon hydrogen to supply domestic needs and export to international markets. Though Canada faces competition from several energy exporting nations, capturing even a modest share of the expected market for low-carbon hydrogen imports would drive a significant expansion in domestic hydrogen production levels. Our long-term planning case for North America has Canadian production of low-carbon hydrogen for export ramping up in the mid-2030s through 2050.

Canada's future electricity demand will be highly sensitive to the mix of green versus blue hydrogen exports. Producing green hydrogen from water electrolysis is a highly electricity-intensive process whereas blue hydrogen production methods are not.

Green hydrogen exports, while highly uncertain, could drive a wave of renewable development in Canada. Onshore wind will account for most of the renewable additions to support green hydrogen production. The need for wind resources will constitute a significant wind building boom in Canada starting in the mid-2030s.