Although September marks the fourth consecutive merchandise trade surplus, the widening of the surplus was achieved by poor import performance and lower trade flows. The reduced automotive trade flows in August, because of the ongoing semiconductor shortage, greatly intensified in September. Motor vehicle and parts exports plummeted 17.9% m/m while imports decreased 13.6% m/m. Excluding these trade flows, exports and imports would have fallen 0.5% m/m and 1.2% m/m respectively. Overall, 6 of 11 export product categories declined during the month. Metal and non-metallic mineral products as well as forestry products and building materials were the other major export drags. Partially offsetting this was USD12.6 billion in energy product exports. Aided by higher prices, crude oil exports advanced 7.2% m/m to a record high value. A welcome 2.9% m/m rebound was registered in agriculture and intermediate food product exports, after two consecutive export declines and drought conditions across central Canada through the summer months. However, detailed data was mixed, with considerably weaker wheat and animal product exports.

Nominal imports were down in 7 of 11 categories. As with exports, metal and non-metallic mineral product imports were notably soft, with copper imports unwinding from an unusually high August level. Canadian refinery shutdowns and Hurricane Ida hampering US crude oil production were partly to blame for the 13.5% m/m decline in crude oil imports. Aircraft and other transportation equipment imports and agriculture and intermediate food product imports were the only categories to see any significant gain over August. 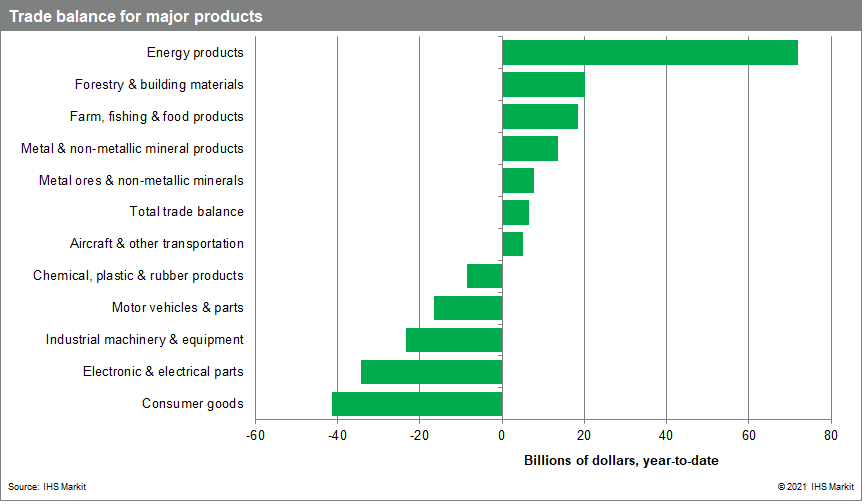 The wider merchandise surplus in September was offset by a wider international services trade deficit—recorded in a separate release. A large increase of commercial service imports was the primary driver behind the service deficit increasing from USD285 million to USD624 million. However, it was the performance of international travel services that was most noteworthy, as beginning 7 September, all fully vaccinated foreign nationals could enter Canada for non-essential purposes. This helped push travel service exports (visitors to Canada) up 18.4% m/m. A similar gain was seen last month after the same restrictions were removed for US travelers. In addition, Canadian travelers continued to be more comfortable with international travel; service imports (typically Canadians visiting abroad) have also seen double-digit monthly gains in August and September. The relaxing of these restrictions has created a starting point for the travel services recovery, which remains the only significant laggard in overall services trade flows, relative to pre-pandemic levels. With the US opening the land border to non-essential travel in early November, further recovery of travel service imports is expected to put downward pressure on the total trade balance. 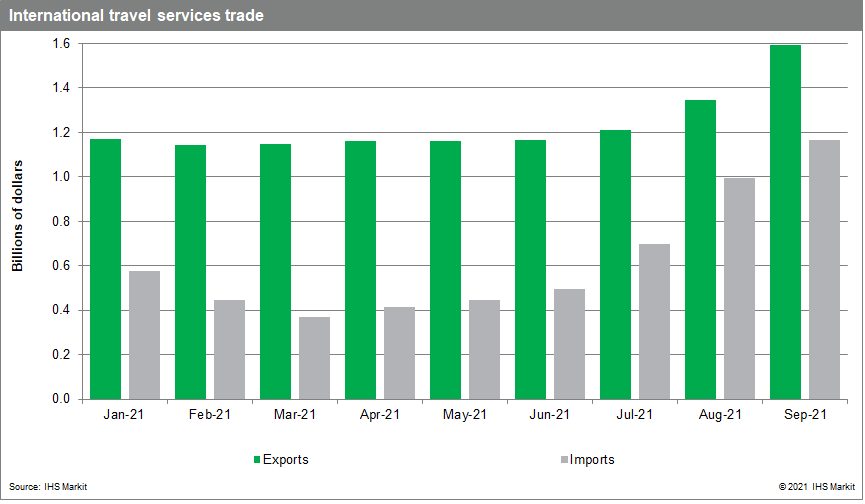 Based on the volume growth differential between goods exports and imports, net merchandise trade should contribute strongly to third-quarter real GDP growth and help offset the net export drag from the previous quarter—in line with the IHS Markit forecast. The difficulties faced within the automotive manufacturing sector, highlighted by this release, helps explain why the advance estimate for September real GDP by industry was flat. However, the breadth of manufacturers in the IHS Markit Canada Manufacturing PMI reporting an increase in new export orders widened in October. This provides some upside for fourth-quarter merchandise trade within non-automotive manufacturing sectors.