The government of Canada has once again decided to delay the implementation of the major drug pricing reforms that were initially set to come into effect a year ago. The new Patented Medicine Prices Review Board (PMPRB) Guidelines are already live on the board's website and have been for a while, but due to the ongoing COVID-19 pandemic, implementation of the new framework has now been extended until January 2022.

The Innovative Medicines Canada (IMC) industry group considered the delay an "opportunity to examine the potential impact of these reforms, as well as affording time to generate more effective alternative solutions". But the government has been very resistant to considering alternative agreements proposed by the industry to date, although it is worth noting that since their first release the new guidelines have been amended several times, each time weakening the framework slightly.

Despite the various concessions, the new PMPRB reforms would still be the most significant overhaul of the pricing guidelines since the program's creation. The new guidelines give the PMPRB the authority to consider additional regulatory factors for setting ceiling prices including a medicine's pharmacoeconomic value, market size, the gross domestic product (GDP) per capita in Canada, and most controversially net revenues/price. All in all, the PMPRB estimates that the new framework will reduce list prices for patented drugs in Canada by 6% on average and generate up to CAD6.2 billion in payer savings over 10 years (less than half the CAD13 billion savings initially anticipated before adjustments were made). One of the key amendments that made the most impact is changing the international reference pricing (IRP) formula for "grandfathered drugs" (or drugs already on the market before August 2019). Instead of setting a price ceiling based on the median international price (MIP), the PMPRB decided to use the highest international price (HIP) instead. This would still effectively lower list prices for grandfathered medicines by 5% on average, and generate CAD4.6 billion in savings (a large bulk of the program's overall savings estimate).

The largest impact on prices stems from the changes made to the reference basket. Canada initially referenced seven countries; the United States, Switzerland, United Kingdom, France, Germany, Italy, and Sweden (PMPRB7). But under the new framework, it would drop the United States and Switzerland, and add other markets with traditionally lower prices. The PMPRB11, is comprised of Australia, Belgium, France, Germany, Italy, Japan, Netherlands, Norway, Spain, Sweden, and the United Kingdom. According to analysis using IHS Markit pricing data, the new additions to the PMPRB reference basket, such as Australia, Japan, Belgium, and Norway are expected to create a downward pressure on the calculation of the price ceiling in Canada whenever international reference pricing (IRP) is used. On average the Foreign-to-Canadian price ratio ranged from a low of 0.83 in Australia to a high of 4.14 for the US. The new Guidelines would notably also increase the frequency and impact of IRP in setting the price caps relative to the current framework. 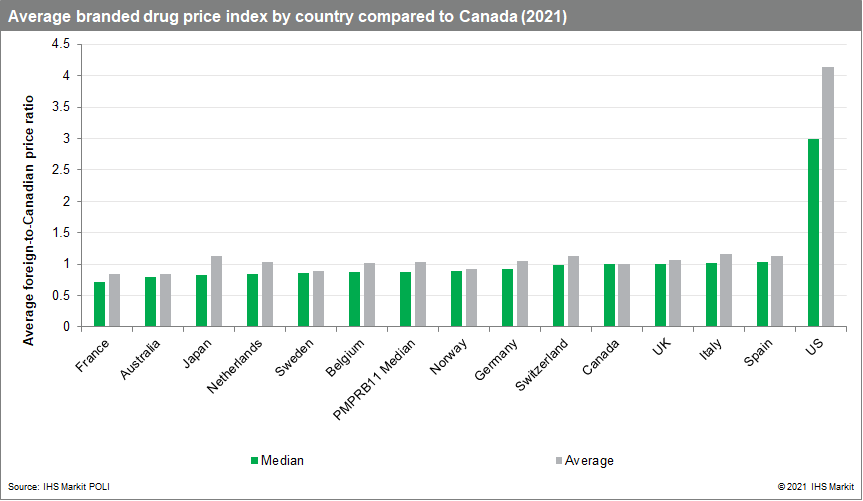 In our assessment of list prices in Canada and across the reference markets using a sample of drugs sold in Canada in 2019 and reviewed by the PMPRB, we found that the median international price (MIP) test was on average 10% lower under the new PMPRB11 basket compared to the previous PMPRB7, while the highest international price (HIP) test was reduced by around 48% with the new reference basket.

The requirement for net revenues/pricing

A large portion of the framework related to the Maximum Rebated Price (MRP) and patentee reporting of net revenues/pricing, has been deemed "unconstitutional" and blocked by Quebec and federal courts. The PMPRB was hoping to use the MRP cap for high-cost Category I drugs (ie. drugs at high risk of excessive pricing), which takes into account the level of therapeutic improvement, and the pharmacoeconomic price (the price at which the treatment cost would meet the cost-effectiveness threshold set by the board). This highly controversial strategy was attempting to incorporate a value-based adjustment to setting price ceilings but failed to account for the fact that mandating companies to disclose confidential rebates and discounts (considered "trade secrets" by pharma companies), can easily be challenged in court. Litigation is still pending at the appellate level, and it is unclear at this time if the PMPRB might decide to remove this section from the Guidelines altogether moving forward. Should the PMPRB be successful in defending the rebated price requirement in court, this could set a dangerous precedent for global IRP programs.

No amount of time will be enough to address the uncertainties that lie ahead for the pharmaceutical industry regarding the implementation of the PMPRB reforms. The Life Sciences Ontario industry group released results from a survey earlier this year that suggested companies were already delaying new product launches in Canada due to uncertainties associated with the new pricing regulations. Canada is already below most comparator countries in the number of new medicines approved and sold. All these implementation delays are unlikely to change that… and neither would the new Guidelines for that matter.