Over the next two years Canadian oil production growth will be exceeded only by US tight oil. Nearly a half-million barrels per day of new oil sands production will be added in 2017-18. Thereafter, growth will begin to step down into the early 2020s as the oil sands settle in for more modest, slower pace of growth.

Global attention on the oil sands turned first towards projects under construction, and then to the viability of producing projects under a lower price scenario. Yet the oil sands production has been resilient and it has continued to notch significant growth. Existing operations not only continued to produce, but have done so at decreasing cost. Oil sands operations have also achieved higher utilization rates-producing more oil from existing facilities. The vast majority of projects in construction at the time of the collapse also continued forward to completion and oil sands production managed to continue its march upwards. All in all, since 2014 oil sands production increased 280,000 b/d-to exceed 2.4 mmbd in 2016. Continued oil sands expansion has offset production declines elsewhere in Canada and in 2016 total Canadian crude oil production approached 3.9 MMb/d, up from 3.7 MMb/d in 2014.

Three years of large production additions remain for the oil sands. Over 2017-19 Canadian growth, led by the oil sands, will only be surpassed by the United States and its tight oil machine. This year and 2018 are expected to have pronounced growth with nearly half million more barrels expected from the oil sands over this period. However, beginning in 2019 growth will begin to step down as a long-aftershock of lower prices and falling investment since 2014 plays out on supply additions into the early part of the next decade. Whereas in recent years-even through lower prices--it was not uncommon for production additions to average over 200,000 b/d per year in the oil sands, following 2019 more modest additions under 100,000 b/d may be more common, at least in to the early part of the next decade. 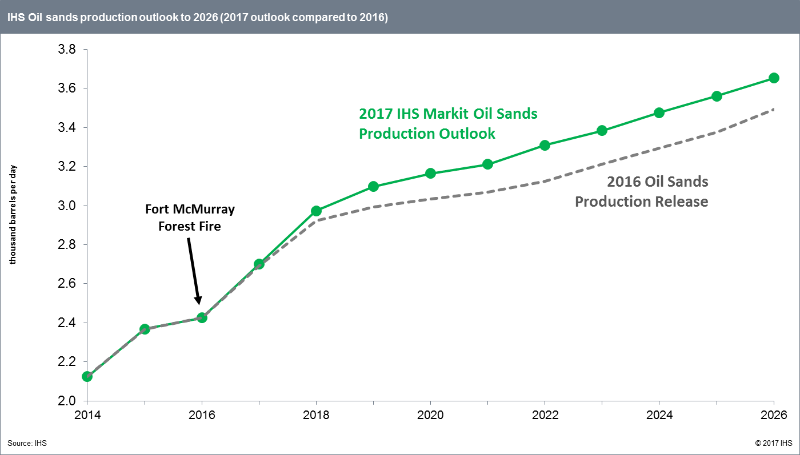 A lack of material production declines from oil sands facilities means growth may be more readily achieved than other forms of oil production globally which has to increase at a pace that exceeds production declines. IHS Markit continues to expect oil sands growth to be dominated by expansions of existing facilities because they are lower cost, quicker to produce and with lower risk. Compared to 2016, IHS Markit also foresees more growth coming from existing operations as they minimize downtime and increase utilization, thereby increasing production output. By 2026 oil sands production could be a million barrels per day higher than today-although nearly half of this growth may come over the next two years.

Innovation should not be ruled out. It unlocked the oil sands. It unlocked US tight oil. And it yet could transform oil sands production, cost and its carbon intensity.