Canada’s employment levels are back

The net gain was surprisingly strong given the anecdotal evidence and survey data that point to ongoing labor shortages. The reopening of Canada's border and the federal election were expected to lead to a boost in tourism-related employment again in addition to a jump in public administration jobs. Yet, there was a decline in accommodation and food services (down 26,700) as well as retail and wholesale trade (down 2,400) positions. Public administration jobs jumped by 37,200 but expect some payback in October with the end of the federal election. Outside of these two broad industries, some of the larger gains were in professional, scientific, and technical services (up 29,600), as well as finance, insurance, real estate, and leasing (up 27,400)—all of which occurred mostly in Ontario. 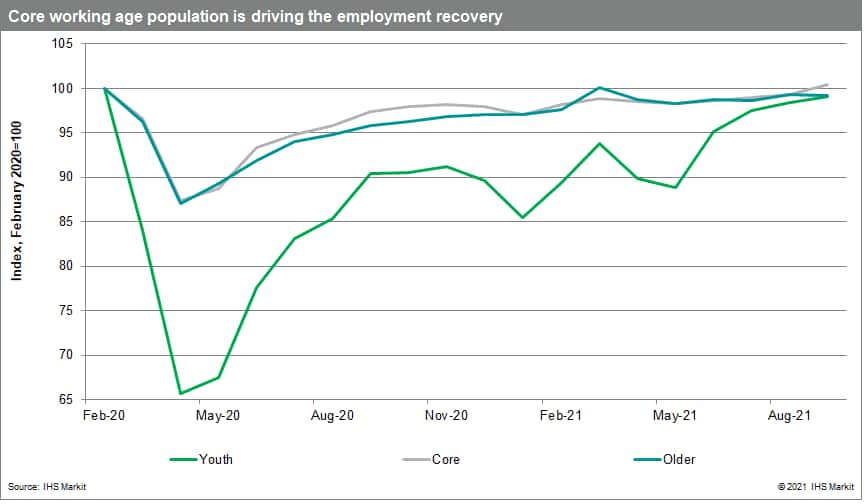 As schools return to in-person learning, education increased 21,300, and after summer production downturns manufacturing employment rebounded by 22,100, which was concentrated in Quebec (up 23,500). Construction employment decreased by 10,900 with most of the drop in Alberta and British Columbia.

The pandemic's marathon job recovery is finally complete, at least from standpoint of employment, labor force, and the participation rate. There is a while to go before all labor market indicators hit previous lows, such as the unemployment rate and the number of unemployed. The employment recovery is still uneven when it comes to different age cohorts. Employment lags for those 55 years and older. Retirements may explain a portion of delayed recovery. However, there are about 77,000 workers aged 20-24 who are still not employed. Plus, full-time male employment lags as does female part-time employment. 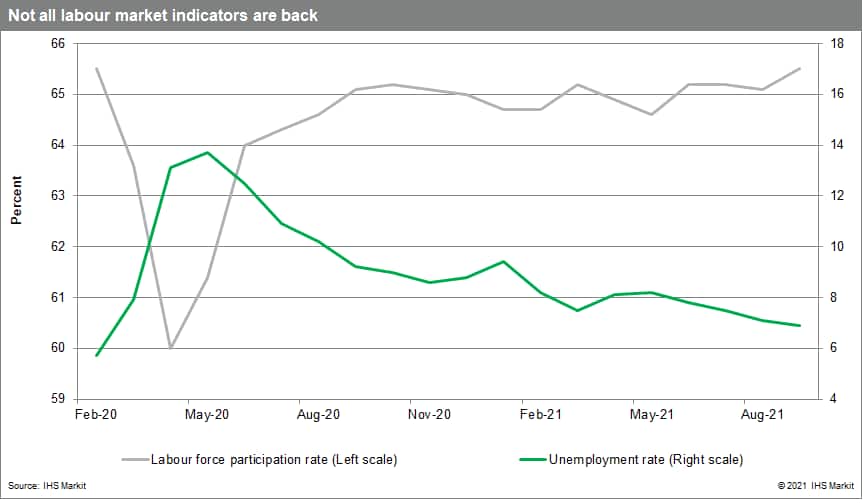 The Bank of Canada will be encouraged by employment's recovery, but it may prove to be somewhat temporary as public and private employers enforce proof of vaccination, leading to a shortage of workers across more industries. Plus, uncertainty surrounding supply chains, the semi-conductor shortage, and shipping delays will continue to limit gains within the goods-producing industries. This will limit consumer spending and investment sector performance, weighing on total output. As in the past, robust employment does not translate into robust real GDP growth, with the near-term outlook being downgraded owing to many global headwinds.