As Canadians celebrate the Toronto Raptors' first basketball championship victory for the country in the history of the NBA, the government is moving towards making history for Canada again with the potential roll-out of a universal, publicly-funded drug plan, known as Pharmacare. A major initiative that would ensure equitable access to essential medicines for all Canadians, especially to 19% of the population (7.5 million) with no, or very limited, prescription drug coverage.

When I first wrote about Pharmacare in April, the exact framework and implementation timeline of the program had not yet been announced. The Advisory Council on the Implementation of National Pharmacare, commissioned by Prime Minister Justin Trudeau's government, has now issued its final report and there is no doubt the major initiative will be transformative for the pharmaceutical industry.

The initiative would see individual provinces and territories expand their public plans to provide prescription drug coverage to every Canadian resident over a period of eight years. The added costs, initially covered by the federal government, amount to an estimated CAD15.3 billion (USD11.5 billion) per year as of 2027, including ancillary savings. Although the council did not specify the sources of funding, it recommended that additional revenue should be extracted via taxation - a similar framework to that which supports public coverage of hospital and medical care under Medicare. 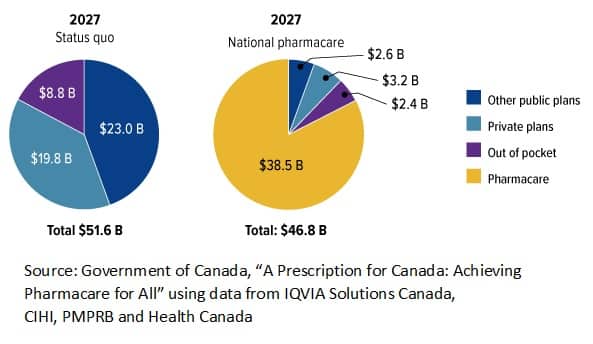 By 2027 the pharmaceutical landscape will be transformed as the private sector is significantly reduced and Pharmacare expands to cover 86% of overall drug spending. Throughout that time, the private insurance industry would be expected to adapt their business models to the changing landscape. Although they will no longer be required to provide coverage for essential medicines listed on the National Formulary, insurers will still be able to provide supplemental coverage for drugs that are not listed on the formulary - as well as coverage for copayments and/or other benefits such as wellness programs, in addition to vision, dental, and paramedical coverage.

Although the government has already taken steps to set up the groundwork for Pharmacare with the creation of the Canadian Drug Agency (CDA), one of the main prerequisites for the program; the eventual successful implementation of this initiative hinders on one critical fast-approaching day. On 21 October 2019, if Trudeau's Liberal Party, and major Pharmacare proponents, fail to retain majority government status in the federal elections, the program's implementation could become highly uncertain. I guess, we just have to wait and see: the elections might just prove to be a very tight call, much like the NBA finals.