Republic of Congo's recent election has highlighted the mounting challenges facing that country as well as fellow mature West African hydrocarbon producers Cameroon, Equatorial Guinea and Gabon, related to political, economic and energy-sector transitions. Amid intensifying global competition for upstream capital, the countries are under growing pressure to adjust fiscal and contractual terms to better suit their remaining resource opportunities and an evolving investor mix.

The four countries' historical failure to diversify away from oil, gas and other commodity exports - despite repeated price shocks - has left them particularly prone to the current economic, social and investment stresses created by the coronavirus disease 2019 (COVID-19) pandemic, and ongoing strategic shifts by exploration and production (E&P) investors related to an expected global energy transition from fossil fuels to lower-carbon energy sources. 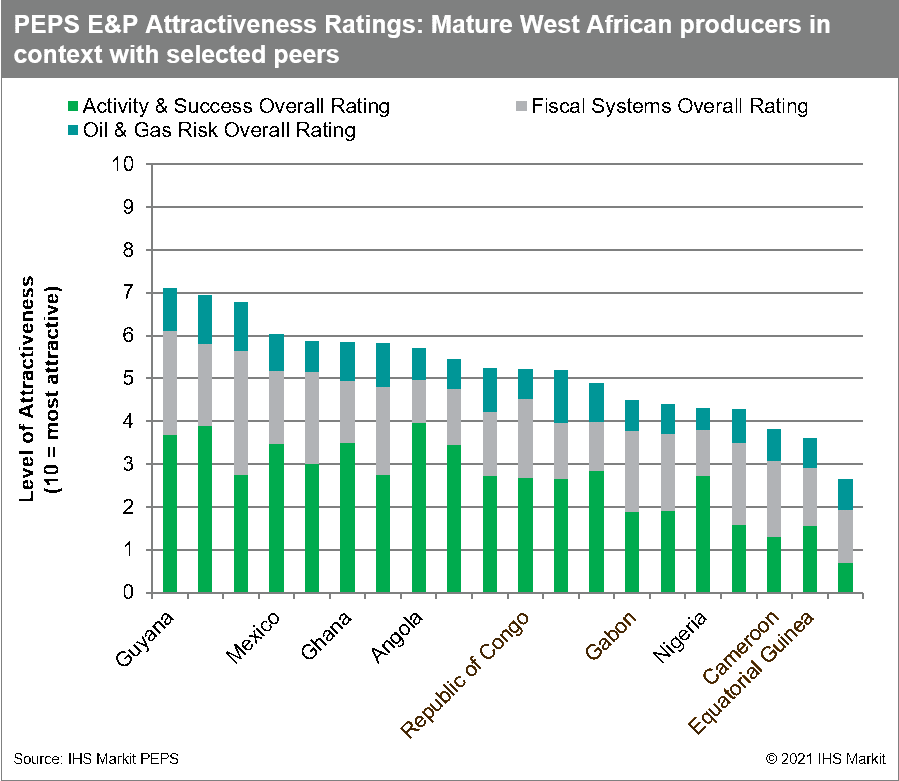 All four face similar challenges that set them apart from larger regional exporting peers Angola and Nigeria: They must stay sufficiently attractive to harness any post-pandemic recovery while also coping with upcoming once-in-a-generation leadership transitions. Despite the strong grip on power that each president holds, uncertainty remains over how these transitions may play out. Hydrocarbon revenues historically lubricate their political patronage systems, but these cashflows are greatly reduced amid economic crises ongoing since at least the 2014 price fall.

Of the four, Cameroon has moved furthest past economic and political oil revenue dependency, but that has not encouraged a more inclusive, democratic system. Rather, the opposite has occurred, with President Paul Biya abolishing presidential term limits in 2008 and his extended rule becoming increasingly authoritarian. 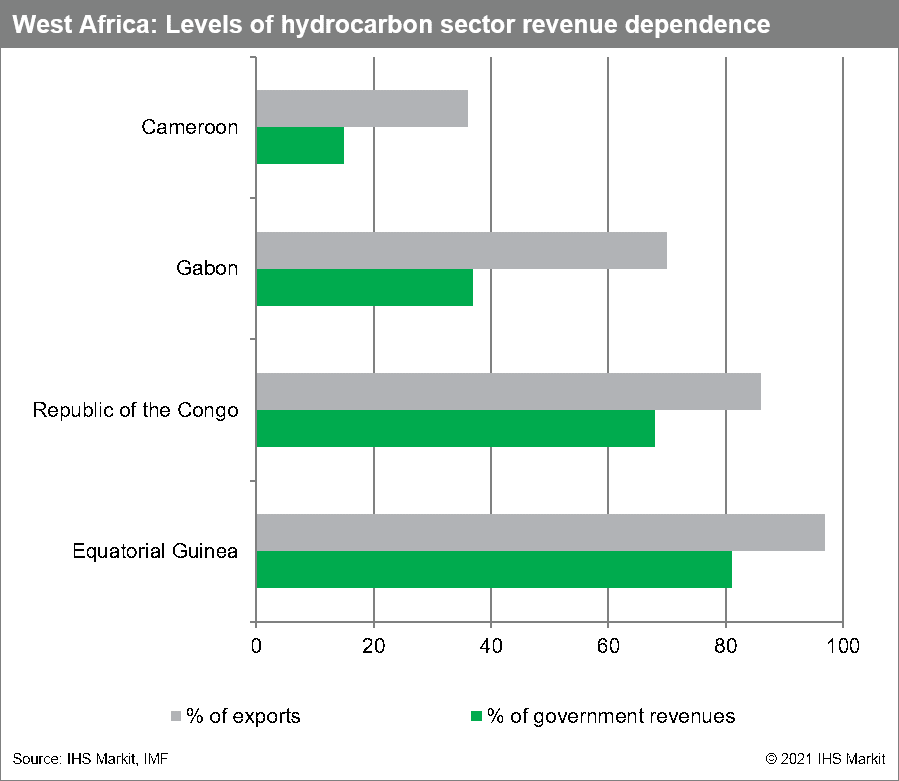 Cameroon offers a cautionary example as Equatorial Guinea, Congo and Gabon face a similar forced transition away from hydrocarbon revenues. Related economic crises have already contributed to strikes, social unrest, disputed elections and waning legitimacy in the region, and will make the upcoming leadership transitions much less predictable. Ruling parties have a reduced ability to co-opt rivals, retain the loyalty of the military, and control protests and violent unrest.

The gradual erosion of oil export-dependency in West Africa will not necessarily translate to increased democracy or political stability in the region, and a move away from longstanding, authoritarian leaders could ultimately be negative for policy predictability and hamper foreign investment. Political risks and policy volatility arising from economic shifts and leadership changes could form a growing hurdle for the countries' efforts to maximise monetisation of their remaining hydrocarbon resources. 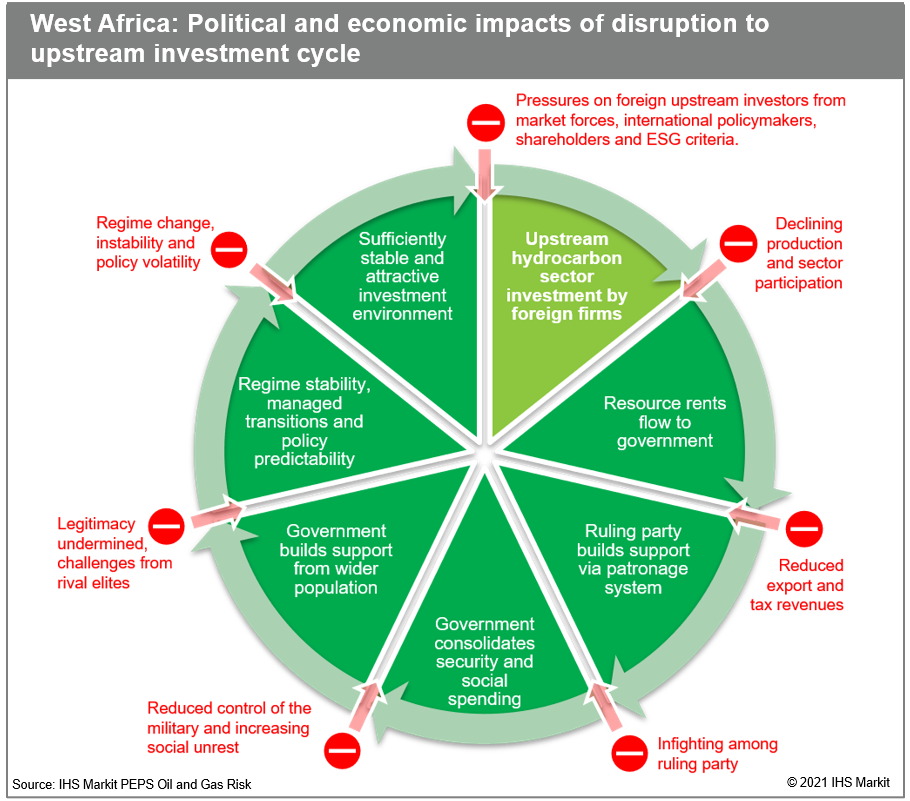 While the countries can control some upstream investment drivers, such as contractual terms and regulatory systems, they have limited influence over growing international climate policy pressures on international oil companies to reduce fossil fuel spending, while companies' increasing Environmental, Social and Governance (ESG) responsibilities will also factor into investment decisions.

The shifting investor mix and increasing time pressure to monetise remaining resources raise the stakes for West African governments to offer the most competitive and appropriate terms possible while still securing sufficient revenues and local benefits.

Recent fiscal and contractual changes by the four countries have mostly been investor-friendly, but their efforts to offer tailored terms for mature, marginal and gas fields could yet go further if they are to remain globally competitive:

Cameroon: The 2019 Petroleum Code updated the previous 2009 law with relaxed fiscal and contractual terms, but Cameroon's recent lack of licensing activity suggests that further improvements to terms may be required for the country to secure investors for its remaining resources. Regulation still lacks sufficient clarity to stimulate more domestic gas projects.

Equatorial Guinea: In mid-2020 the government published a new Petroleum Regulation, which extended the productive life of mature fields. However, local content rules were also tightened. The state's ability to ease tax rates is probably limited somewhat by its high dependence on hydrocarbon sector revenues amid ongoing recession.

Republic of the Congo: The 2016 and 2018 Model Contracts reduced tax take and introduced more flexibility in comparison with terms set out in the 2016 Hydrocarbons Code. Terms mandating local company participation emphasise the state's pursuit of some enhanced local benefits despite eased fiscal terms.

Screen upstream opportunities and above-ground risk with one tool: PEPS

Join us at #IMAGE21 next week, where our team will talk about the future of #oilandgas and #geoscience. See the ful… https://t.co/oQE8mD2C4A