A push by the Tanzanian government to reinvigorate a stalled LNG export project led by Equinor and Shell must overcome longstanding uncertainties around commercial terms and global market dynamics. For LNG and the hydrocarbon sector more broadly, Tanzania will likely have to make improvements to fiscal terms and contract sanctity if proposed developments are to be revived and new exploration encouraged.

Incoming president renews pursuit of LNG
Tanzania's new head of state, Samia Hassan, in April called on the energy ministry and international oil company (IOC) operators Equinor and Shell to expedite a stalled plan to monetise 35 Tcf of gas discoveries via a USD20-billion onshore liquefaction plant. Hassan also called on the ministry to find new investors if a development agreement can't be reached with Equinor and Shell.

Dash for gas hampered by commercial, fiscal and contractual hurdles
Tanzania's deepwater gas resources - discovered between 2010 and 2018 - remain untapped despite their huge economic potential. Equinor and Shell had originally envisaged the start-up of the proposed two-train, 10 million tons per annum (MMtpa) onshore Tanzania LNG plant this year, but start-up now looks unlikely until after 2030 at the earliest - if at all.

A final investment decision (FID) on the plant is contingent on the signing of a Host Government Agreement (HGA) between the state and the IOCs, which would establish the investment framework including commercial terms. High and fluctuating costs and a shifting global gas market make the economics of the project tenuous, and they were further undermined by toughened tax and contractual terms introduced by Tanzania's 2015 Petroleum Act, 2016 Finance Act and, in particular, three 2017 natural resources laws championed by previous president John Magufuli. Those laws enabled the authorities to renegotiate production sharing agreements (PSAs) signed by previous governments in which terms are deemed "unconscionable". In any renegotiation, the government would likely seek to increase tax take and state participation, as it has successfully done in the mining sector.

Battle lines drawn, but compromises needed
Although Hassan's desire to reinvigorate the LNG project seems positive - at least relative to Magufuli's approach - the government will need to examine the barriers created by its own policies. Equinor has repeatedly stated that contract sanctity and stability are "necessary elements for the success of LNG development". Equinor and Shell both agree that HGA talks should resume this year and be concluded quickly, pointing to a shrinking window of opportunity to monetise the gas resources due to climate concerns.

Despite agreement between government and IOCs on the need to expedite and conclude HGA talks, reaching the necessary compromises may be challenging. Fiscal terms relating to upstream and midstream elements and local content obligations are probably still the main sticking points between the parties. Should compromises not be reached on key issues based on the current two-train onshore concept, Equinor and Shell could seek to redesign the project, or walk away if the economics remain uncompetitive. 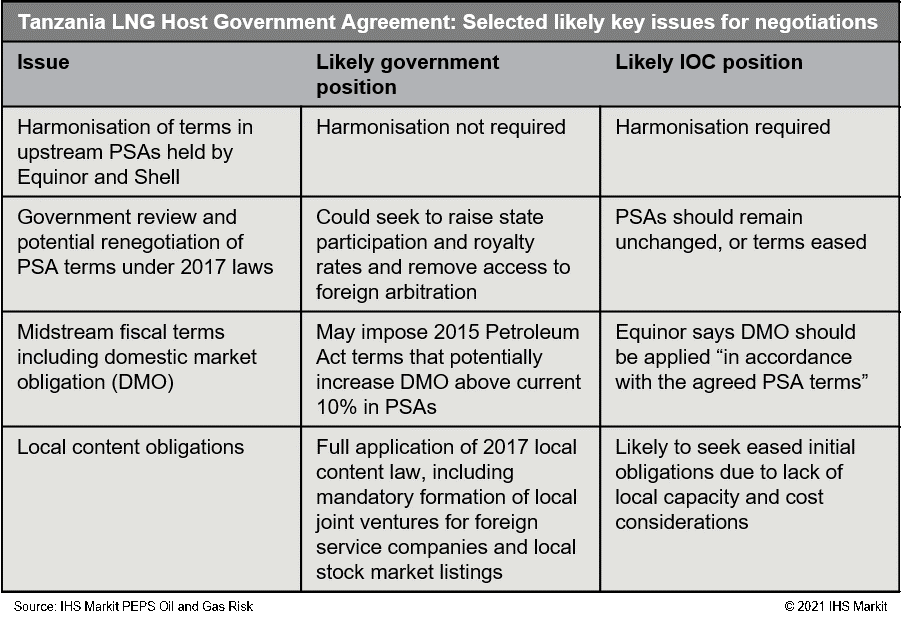 Meanwhile, Hassan's stated intent to find other, more willing investors if talks aren't fruitful is probably unrealistic. Should HGA talks fail to progress, in theory the government could reach an agreement with the IOCs under which they relinquish the blocks, but there are few technically competent replacements that could monetise the deepwater gas for both export and domestic use. Other majors are either focused on LNG investments elsewhere and/or are reducing future spending commitments. International national oil companies (NOCs) such as Petronas could perhaps step in for an FLNG solution, but fundamentally the government's options to monetise the gas are very limited.

Window for LNG may be shut, but eased policy can still boost hydrocarbon sector
Years of wrangling and inertia over Tanzania LNG shows that the government and IOCs are still struggling to overcome internal hurdles. Yet the project may already be compromised by the exogenous forces of global LNG market supply and demand combined with energy transition considerations. Even if HGA terms are agreed, Tanzania LNG may struggle to attract buyers and financing amid an anticipated market oversupply until the end of the 2020s, which is unlikely to ease sufficiently even if neighbouring Mozambique's LNG programme is delayed.

That said, Hassan's apparent desire to accelerate LNG development may be a positive indicator for broader exploration and production activity in the country. Much will depend on Hassan's ability to tighten her grip on sector decision-making and follow through on stated aims. Her decisions on whether to renegotiate PSAs following the sector-wide contract reviews, and her approach to Tanzania's currently uncompetitive fiscal terms in light of planned new licensing will be particularly important. Tangible improvements are needed on fiscal terms and contract sanctity if proposed developments and new exploration are to be revived at scale.