Greece has requested EUR17.8 billion of grants and EUR12.7 billion of loans, the maximum amount available, from the EU's Recovery and Resilience Facility (RRF), part of the bloc's EUR750-billion Next Generation Fund. This amount represents 18.1% of Greek GDP in 2020 (see Chart 1) and would come in addition to funds allocated under the EU's 2021-27 multi-annual budget. 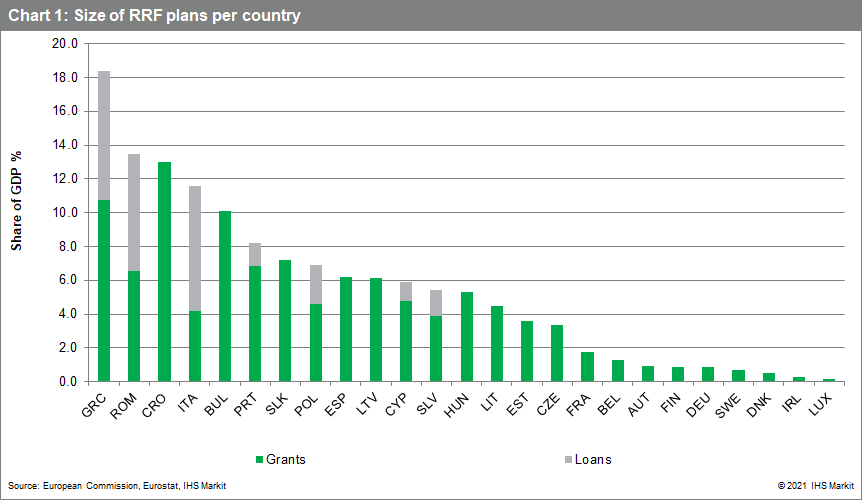 The Greece 2.0 plan is structured across four different pillars: green transition, digital transformation, employment/skills, and boosting private investment. The green pillar absorbs most of the funds (see Chart 2). In total, 38% of the spending (around EUR12 billion) is earmarked to support climate objectives, while 22% is for digital investments. Under EU guidelines, the minimum allocation for green policies and digital transition should be 37% and 20%, respectively. 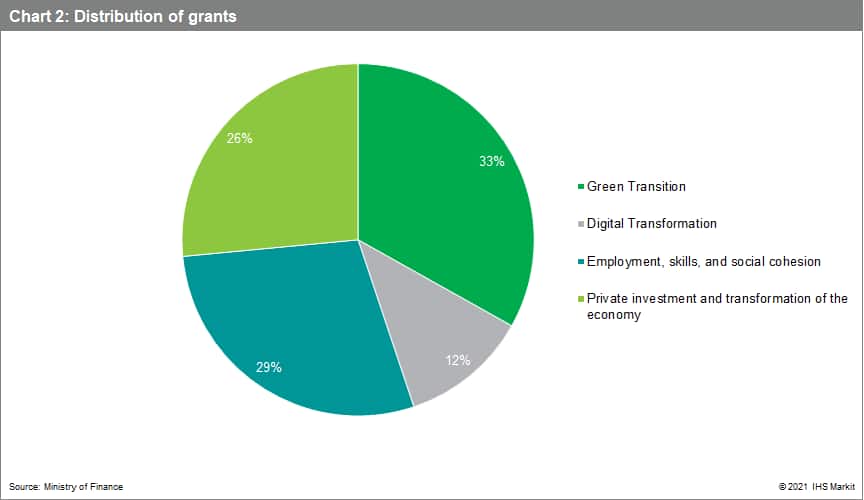 The recovery program includes a total of 170 projects, reforms, and investments across the four pillars. At the same time, it also aims to mobilize resources from the private sector to maximize the economic impact of the funds, mainly through the use of the RRF loan envelope. Greece's recovery program includes a detailed description of the investments and reforms earmarked for each pillar.

Greece historically has had a poor record in absorbing EU structural funds, but absorption rates (i.e., the percentage of available funds from the EU budget that has been paid to an individual EU member state) have improved substantially in recent years after the EU eliminated the co-financing element for certain programs, supporting competitiveness and employment. Moreover, reforms implemented as part of the adjustment programs between 2010 and 2018 helped to improve administrative capacity. As a result, Greece's absorption of EU structural funds for the 2014-20 period was the highest in the EU (see Chart 3). 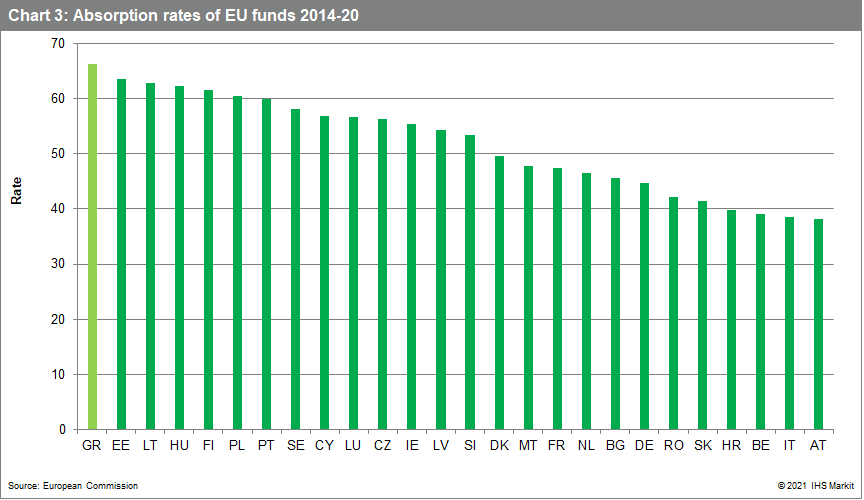 Greece's ambitious plans for reform, combined with the large size of the planned investments, suggest that the impact of Greece 2.0 on the economy could potentially be very large. Spending is focused on areas assessed to have relatively high fiscal multipliers, such as infrastructure investment, while the reforms are well targeted to deal with some of the long-standing barriers to economic growth, including the low efficiency of the public sector, red tape, and a slow and costly justice system. We assess that progress with structural reforms in areas such as public administration is likely to be gradual over the next few years, but improvements will almost certainly have a positive impact on Greece's business environment given the low starting base. Investments in digital infrastructure have the potential not only to lift overall productivity but also to reduce tax evasion (through digital invoicing) and boost labor participation rates.

The combination of higher public investment and reform is also likely to boost activity by encouraging private investment based on expectations of accelerating future demand. Reforms could represent positive indicators for foreign direct investment (FDI), particularly in the information, communication, and technology (ICT), construction, and energy sectors.

Greece's recovery and resilience plan is likely to contribute to significant but gradual improvements in the business environment. The public administration is likely to continue to face challenges from mismanagement, administrative complexity, political interference, and corruption in the two-year outlook but we expect those risks to decline. Contrary to previous administrations, the ND government has assumed political ownership of structural reforms, supporting their continued implementation. Moreover, the ND enjoys an absolute majority in parliament and future limited government reshuffles are unlikely to significantly delay key reform priorities such as supporting big-ticket privatizations, digitalization programs, tax cuts, and large energy transition initiatives. Beyond the two-year outlook, with the next parliamentary election expected in 2023, a change in government involving the reappointment of the left-leaning SYRIZA is likely to imply policy reversals, especially affecting energy projects that include renewables, which are opposed by environmental groups, as well as backtracking on policies that would imply reductions in public-sector employees and wages.

As explained above, factors such as the absorption rate of EU funds and the success of the reforms and infrastructure spending in boosting private-sector investment, both domestic and external, will determine the economic impact of the program. Taking into account Greece's historical performance and some of the challenges that are likely to be experienced over the coming years, our baseline macroeconomic projections assume a 50% absorption rate of the EU recovery funds. This assumption may have to be revised once there is more evidence about Greece's ability to implement the investments and reforms outlined in the recovery plan. Although the Greek authorities have already started to pre-finance some projects in anticipation of the expected funds, we expect most of the impact on growth to be felt between 2023 and 2025. 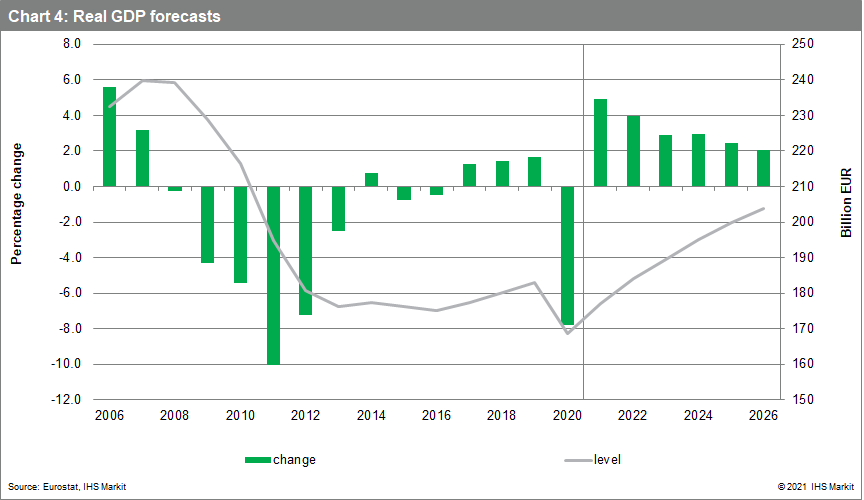