The latest Caixin PMI painted a picture of a sustained improvement in manufacturing conditions across China during October. Goods producers reported improved demand due to stimulus measures as well as rising hopes that trade tensions are starting to ease. The survey also brought signs that the latest output expansion has become more broad-based, suggesting that the improvement has more to run in the coming months.

After adjusting for seasonal influences, the headline Caixin China General Manufacturing PMI reached 51.7 in October, up from 51.4 in September, to signal the strongest improvement in the health of the sector since early 2017. 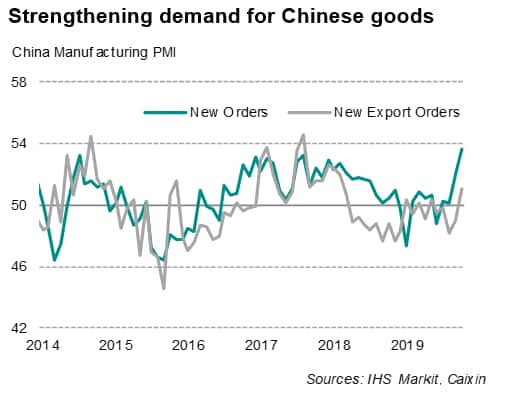 Driving the headline index was a quicker expansion in output that was the sharpest since December 2016, fueled in turn by a concurrent strengthening of demand, both at home and across export markets. New orders rose at the fastest rate for over six-and-a-half years, supported by a return to growth of export sales. Foreign demand for Chinese goods increased at the quickest pace since February 2018 during October. However, firms also perceived that sales had gained momentum and the business environment had improved on the back of policy support. 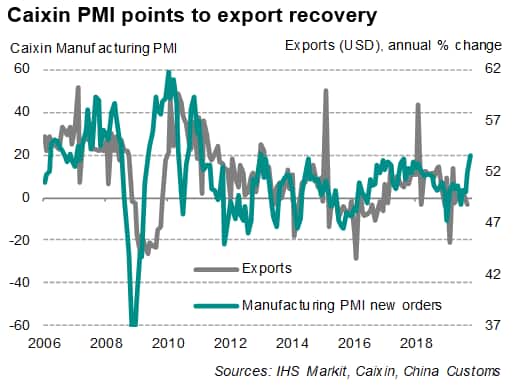 In line with stronger sales growth was a further (and faster) rise in backlogs of work, the quickest for over one-and-a-half years. However, despite the further development of capacity pressures, factories reported another fall in employment. October survey data showed an increased rate of job shedding, with workers being lost at the fastest rate for just over a year. However, job losses primarily reflected voluntary leavers. 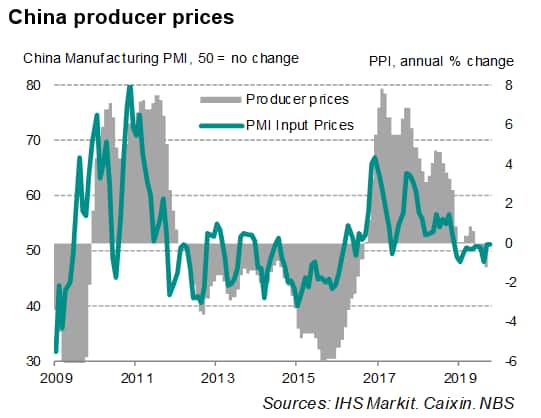 The PMI has now risen for four consecutive months, and the improved manufacturing performance has fed through to business sentiment. While still subdued by historical standards, optimism rose to a six-month high in October, as measured by the Future Output Index.

Digging into the details of the survey revealed that manufacturing conditions are strengthening across the spectrum of manufacturing firms by size. While large manufacturers continued to lead the improvement, medium- and small-sized firms were also seeing stronger growth. Looking at the types of manufactured goods, producers of consumer goods and investment products were reporting faster rates of growth compared to those manufacturing intermediate goods.