Caixin PMI data showed a stronger increase in Chinese manufacturing output during May, but a further decline in sales may hinder the recovery in the months ahead. Export sales in particular continued to weaken at a steep rate amid a global downturn in demand. The manufacturing sector also reported a rise in spare capacity, which further dampened factory employment.

While the survey highlights the challenges facing China's factories, there were still some tentative signs of stabilisation. Supply chains continued to revive and business expectations about the year-ahead improved.

The Caixin headline manufacturing PMI1 for mainland China, compiled by IHS Markit, rose from 49.4 in April to 50.7 in May, indicating a mild improvement in operating conditions of the sector from the prior month.

The improvement was primarily driven by further growth in output, where the increase was the fastest for over nine years. That said, given the magnitude of the slump suffered in February, the latest rate of growth was comparatively mild, suggesting that the loss of output due to earlier lockdown measures has yet to be recouped. Furthermore, the increase in production since February came at the expense of firms tapping into backlogs of previously placed orders, many of which had been placed before the COVID-19 restrictions were imposed. Indeed, the rise in backlogs had slowed since February's high, with May showing the first decline in the amount of unfinished work for over four years.

1Data for Caixin China Manufacturing PMI survey were collected 12-20 May 2020. 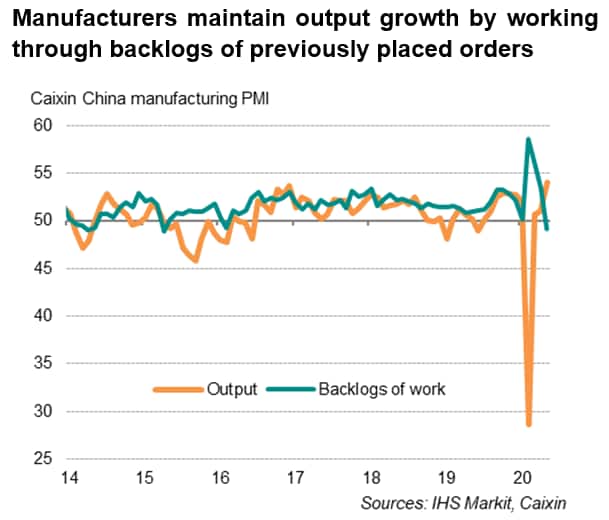 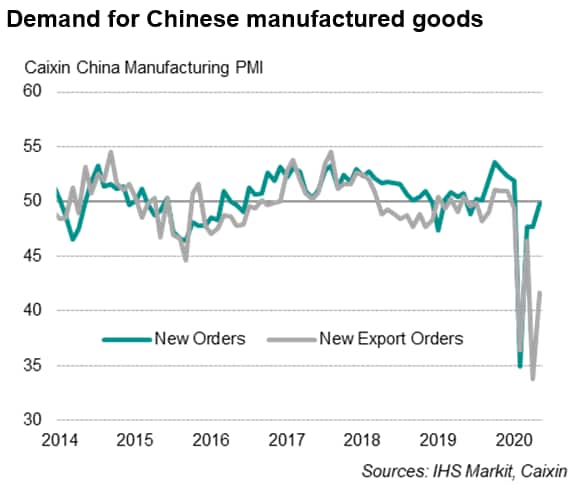 Demand continued to weaken during May. New order intakes were down for a fourth straight month, although the latest decline was marginal. This hints at the downturn in demand approaching stabilisation, as firms increasingly turned towards the domestic market for sales. External demand meanwhile remained under pressure. While slowing from April, latest drop in new export orders was still among the steepest recorded since the height of the global financial crisis.

With falling demand, Chinese manufacturers sought to reduce capacity by cutting workforce numbers further. Overall employment fell for a fifth month in a row during May. However, the rate of decline slowed further since February's record downturn and was only marginal overall.

The survey data showed that the sharpest fall in employment occurred at producers of intermediate goods (which supply inputs to other manufacturers), followed by those making investment products (such as plant and machinery). Consumer goods manufacturers reported a broadly unchanged level of employment. 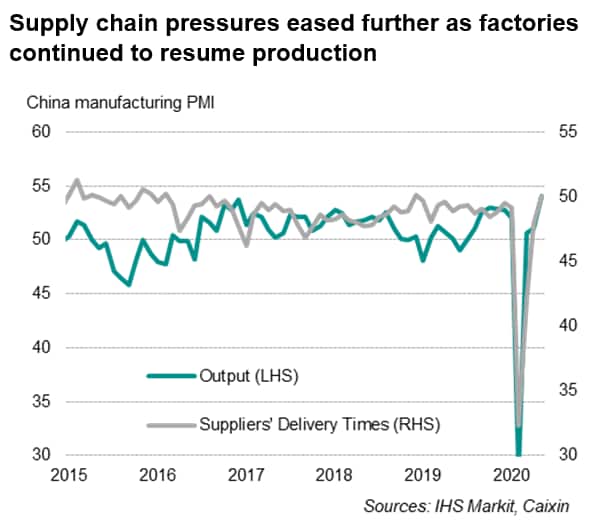 The survey brought signs of further restoration of the supply chains in China. Delivery delays were not reported for the first time in nearly one-and-a-half years during May as the resumption of production continued to help rebuild the distribution network.

Consumer goods producers actually reported an improvement in vendor performance, while deliveries of inputs to makers of intermediate and investment goods were only modestly delayed, a considerable change from the height of the disruptions seen back in February.

Average cost burdens continued to fall in May, as lower prices for raw materials such as coal, oil, steel and plastics were widely reportedly for driving input prices down. However, there were reports of rising freight costs due to capacity controls linked to global COVID-19 measures. Prices charged for Chinese manufactured products were meanwhile largely unchanged in May following a three-month period of decline, hinting at a stabilisation of pricing power.