Caixin PMI data showed a further modest increase in Chinese manufacturing output during April, but the rise represents only another very marginal upturn in production after the record fall suffered in February. Limiting the sector's recovery was a re-intensification of the loss of export sales, which slumped to the greatest extent since 2008 amid worldwide measures to curb the spread of COVID-19 outbreak. Factory employment and purchasing activity both declined, while business confidence about the year ahead dropped to a four-month low, all of which bodes ill for the sector in coming months.

The survey highlights how, even with factories restarting operations and gradually returning to full capacity, the global downturn in demand is expected to limit the extent of recovery in China's manufacturing sector, with further output expansion likely to be driven largely by processing backlogs.

The Caixin headline manufacturing PMI* for mainland China, compiled by IHS Markit, fell from 50.1 in March to 49.4 in April, indicating that operating conditions of the sector had deteriorated from the prior month.

While factory production rose modestly after a survey record decline in February as increasing numbers of factories resumed work, growth mostly came from working through backlogs of previously placed orders, many of which had been placed prior to the COVID-19 lockdowns. Indeed, the increase in the amount of unprocessed orders slowed further, down from February's high. 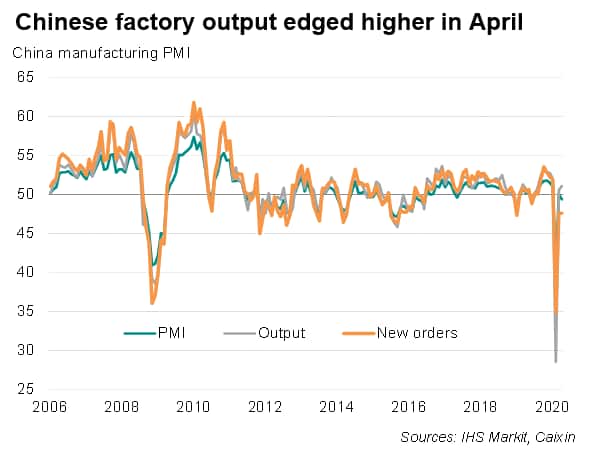 Inflows of new orders meanwhile continued to fall, down for a third successive month. Moreover, although not declining at anything like the rate seen in February, the latest drop in orders was among the largest seen over the past decade, linked in turn to the largest monthly drop in new export orders since December 2008 at the height of the global financial crisis (and the third largest decline in exports in the 16-year history of the survey). 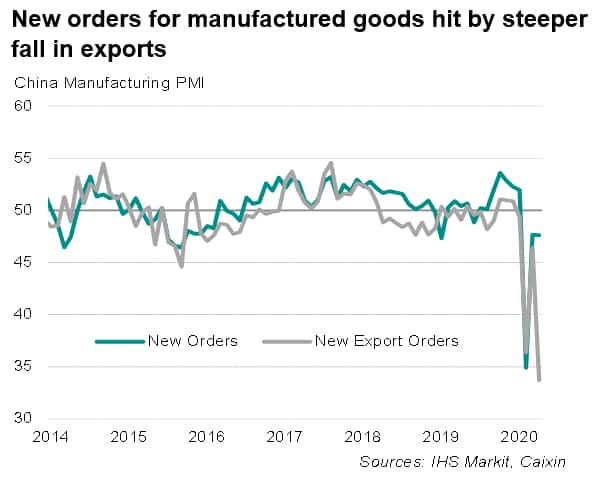 The downturn in the sales trend came at a time where global demand is under great pressure due to lockdowns and other measures imposed in many countries around the world placing a choke on the normal functioning of economies.

Higher output was seen for producers of intermediate and investment goods, while the production of consumer goods fell. Smaller enterprises in particular continued to struggle to raise production.

Supply chains remained under pressure at the start of the second quarter, but the rate at which delivery times lengthened slowed notably and was modest overall compared to the record number of delays seen in February. The resumption of work at factories helped to gradually restore distribution networks. That said, there continued to be reports of transportation issues and firms not yet operating at full capacity among respondents that reported longer delivery times. 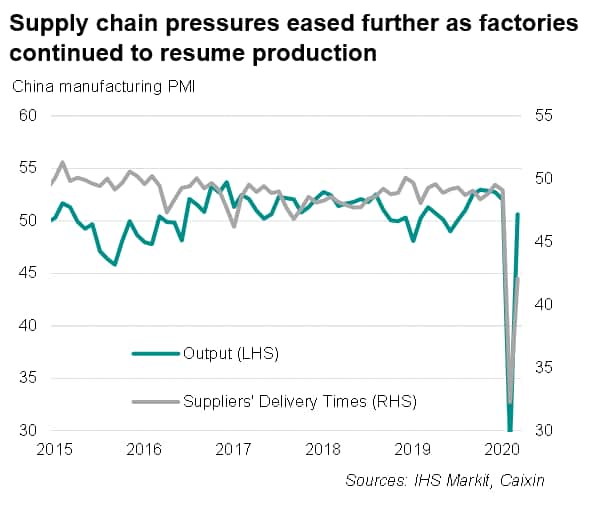 The weakening sales trend saw firms cut back on their staff numbers amid panel comments of layoffs. Overall factory employment fell for a fourth straight month in April. While not as steep as February's record, the pace of decline was among the fastest in recent years. Survey data showed the sharpest fall in employment from consumer goods producers, following by those making intermediate goods while manufacturers of investment products actually reported job creation.

Prices charged for Chinese manufactured products fell for a third month in a row during April as firms reportedly offered discounts to boost sales. Some companies also passed on the savings from lower costs to customers. Average cost burdens fell for a second successive month, dropping at the sharpest rate since the start of 2016. Lower prices for raw materials such as oil, base metals, plastics and pork were widely reported as driving input prices down.