China's manufacturing sector showed a modest recovery in August, driven by increased production volumes, according to the latest Caixin PMI data. However, overall demand was sluggish as the ongoing trade war continued to weigh on foreign sales. Furthermore, business confidence remained among the weakest in the series history, suggesting that policymakers may need to step up stimulus measures.

The Caixin China General Manufacturing PMI, compiled by IHS Markit, rose from 49.9 in July to 50.4 in August, indicating a modest improvement in the health of the sector after two consecutive months of mild decline. The latest reading was also the highest for five months.

The recovery was fuelled by improved production growth, but forward-looking indicators question the sustainability of the upturn. 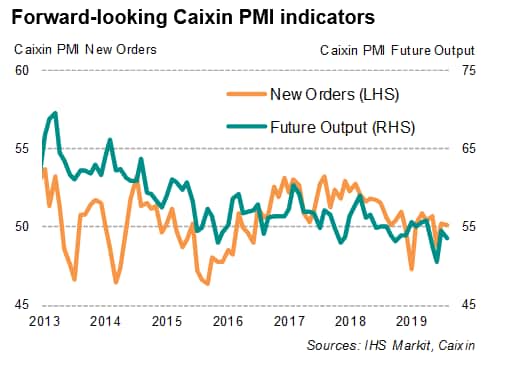 Demand conditions in the sector remained muted. Overall new order volumes were broadly stagnant in August, which was not helped by a third straight month of falling export sales. The drop in foreign orders was the steepest for nine months, with respondents continuing to highlight the dampening impact of escalating trade frictions. 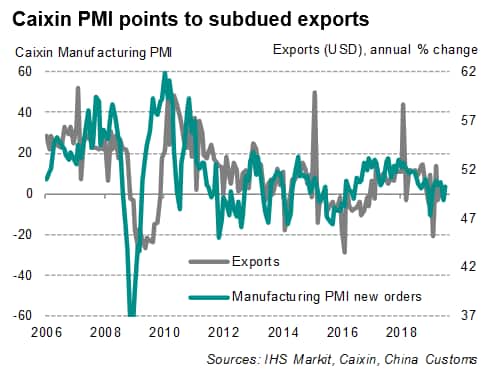 Another worrying sign came from the first accumulation of inventories of final goods so far this year during August, with anecdotal evidence pointing to a rising level of unsold goods due toweaker than anticipated sales.

There was also no evidence of companies' willingness to expand operating capacity or replenish input stocks. The survey indicated that employment was broadly unchanged, while input inventories fell for a second month in a row during August.

Subdued market conditions coincided with the onset of deflationary pressures in the sector. Costs fell for the first time since February despite a near 4% depreciation in the renminbi against the US dollar over August. Meanwhile, factory gate prices fell further midway through the third quarter, with a number of firms commenting on the need for price discounting in the face of greater competition and muted client demand. 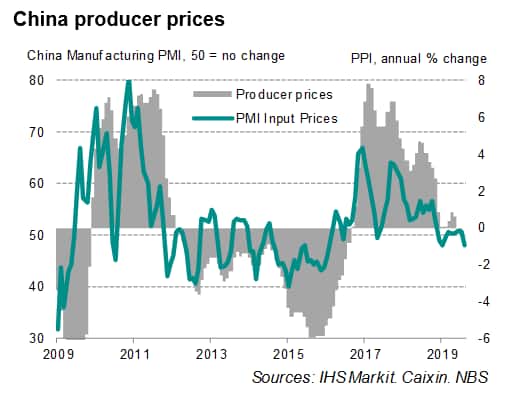