The start of the year saw a further slowdown in China's business activity, according to the latest Caixin PMI data. Order book growth also moderated, while signs of the Wuhan novel coronavirus (nCov) impacting businesses were not reflected yet in the surveys as responses had been collected prior to 25th January. Rising costs meanwhile further added to the challenges facing Chinese enterprises amid a slowing sales trend. 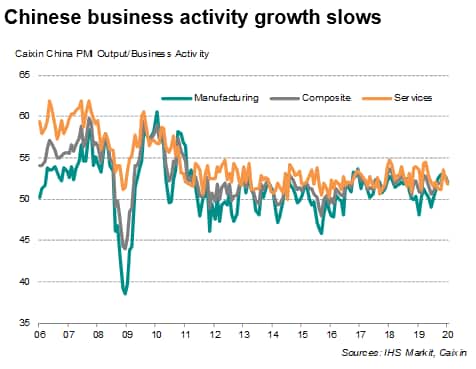 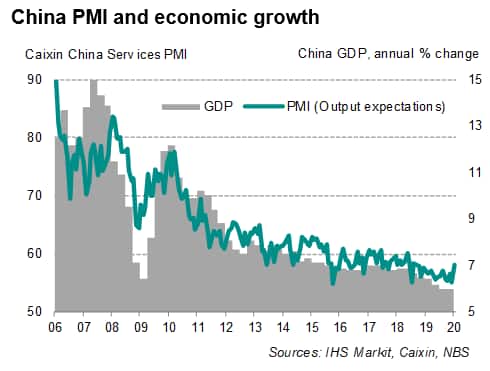 The Caixin Composite PMI Output Index, compiled by HIS Markit and covering both manufacturing and services, dropped from 52.6 in December to 51.9 in January, showing only a modest increase in business activity. The latest reading was the lowest for four months.

The survey data indicated a broad-based slowdown in output, with the expansion of both manufacturing output and services business activity having lost further momentum during January. Growth in overall new orders also slowed, contributing to a broad stagnation in the level of backlogs of work. The near-absence of capacity pressure will in turn likely dampen business activity in the coming months, with firms possibly eating into earlier-placed orders to maintain output levels.

In addition, the expected economic shock of the coronavirus will likely put a dent in growth, especially if the situation is prolonged or worsens. As such, the February update of the Caixin PMI will provide an early insight into the initial economic impact of the coronavirus on business.

Average cost burdens faced by Chinese firms meanwhile rose at the fastest for four months at the start of the year, adding to concerns of firms already confronting a slowing sales trend. Rising costs were especially notable in the manufacturing sector, with the solid upturn in input costs brought about by higher prices for raw materials such as metals, oil and agricultural products, according to anecdotal evidence.

Notwithstanding accelerated cost inflation, firms only raised their selling prices marginally in January as competitive pressures and slower sales growth reportedly constrained their ability to pass on higher costs to customers. 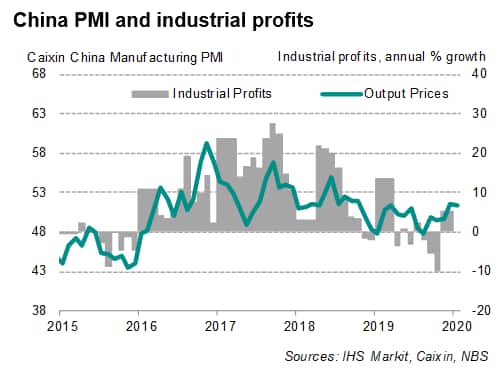 Survey data showed that business confidence about output over the next 12 months strengthened in January, with the Future Output Index rising to the highest level since May 2018. The easing in US-China trade tensions, with the signing of the Phase One deal at the end of last year, was a major factor behind stronger optimism.

With the survey data collected prior to the escalation in the coronavirus situation, the true impact on business expectations and activity is expected to only be reflected in February PMI data. Manufacturers may be particularly vulnerable to the epidemic because of work suspensions. As of 3rd February, 22 out of 31 mainland provinces had made announcements to extend work suspensions to 9th February. Further extensions due to a worsening of the epidemic will hurt factory production.