Business conditions across the Chinese economy improved at the fastest rate for nine months during March, according to the latest Caixin PMI surveys, providing evidence to suggest that recent fiscal support measures are beginning to work. The Caixin China Composite PMI (which covers both manufacturing and services), compiled by IHS Markit, indicated the largest increase in output since mid-2014. The 'all-sector' output index rose to 52.9 in March from 50.7 in February.

The strongest growth in manufacturing output for seven months was accompanied by a surge in service sector business activity, its fastest gain in just over a year. Manufacturing conditions improved for the first time in four months, supported by firmer demand, including a slight rise in exports. 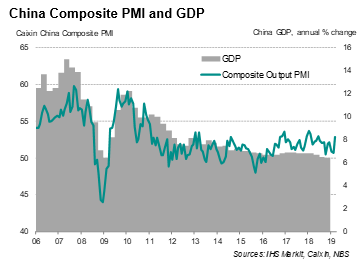 Further expansions of business activity and employment look likely in April as overall inflows of new orders increased at the fastest pace since February last year, led by an increasingly solid growth in service-related sales. 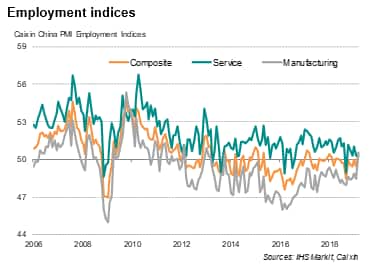 The average PMI reading for the first quarter of 51.5 is the same as in the final quarter of 2018, suggesting that the pace of economic growth is likely to stabilise around the 6.4% annual rate indicated by official GDP for the three months to December.

The upturn takes some pressure off the authorities to roll out more expansionary measures, while also suggesting that some of the implemented fiscal stimulus have started to filter through to the economy. The government has already taken fresh fiscal and monetary policy action to stimulate the economy, such as cutting taxes and banks' reserve requirements, and bringing forward infrastructure projects. Survey data now suggest the measures taken to date are having an impact.

However, much of China's economic stabilisation will also hinge on the progress on a trade deal between China and the US. In any case, Premier Li hinted at further policy measures if necessary.