Demand softened and employment fell during the month, with business confidence sinking to its lowest on record, calling into question if current stimulus policies are sufficient to support economic growth. 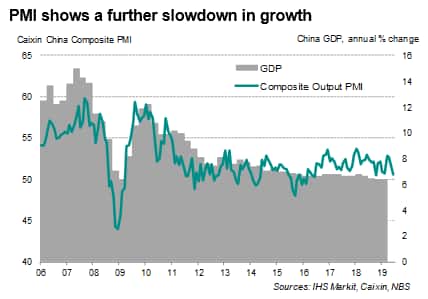 The headline Caixin China Composite PMI Output Index (covering manufacturing and services) fell from 51.5 in May to 50.6 in June, its lowest since October 2018 and the second-lowest seen over the past three years. 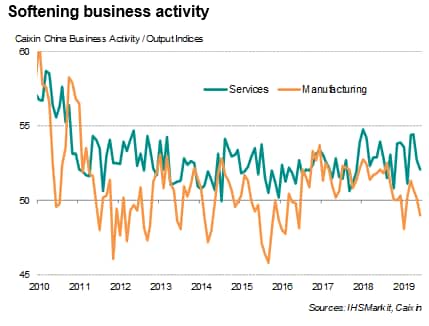 Manufacturing led the weakness at the end of the second quarter. The headline Caixin China Manufacturing PMI fell to 49.4, the first time in four months that the index registered below the neutral 50.0 threshold. Output, new orders, exports, employment and purchasing activity all fell during the month.

Business confidence relating to future factory output dropped to its lowest since data for this indicator were first available over seven years ago, indicating that the proportion of optimists was only marginally more than that of pessimists and suggesting that the manufacturing slowdown could continue in coming months.

Indeed, official statistics implied that the fiscal stimulus may have helped support only a few industries. While industrial profits (yuan terms) rose at an annual rate of 1.1% in the first five months of the year, there were significant variations among sub-sectors, reflecting the impact of fiscal stimulus in the form of higher infrastructure spending across the manufacturing sector. Profits of transport-related manufacturing grew at an annual rate of over 40% for the Jan-May period. By contrast, automobile manufacturers and producers of computer and communication equipment reported a double-digit annual rate of decline in profits. 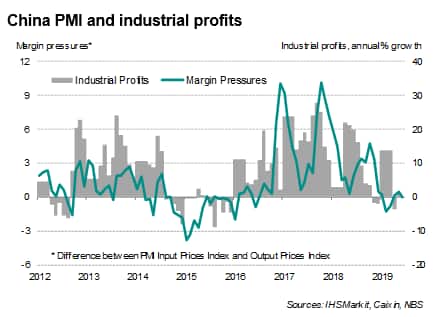 The manufacturing weakness also appeared to have broadened out into the wider economy. The service sector showed signs of softening growth in June, with activity expanding at the weakest rate for four months to show one of the weakest performances seen over the past two years.

Although business sentiment ticked higher in the service sector in June, the rise was insufficient to offset the deepening manufacturing gloom. Overall business sentiment has fallen to a new survey low as a result, with companies highlighting increasing concerns about the adverse impact of ongoing US-China trade tensions on future business activity.

The widening slowdown in economic activity and gloomier prospects weighed on hiring. Overall employment fell for a second consecutive month, albeit only slightly. The weakness in the labour market stemmed mostly from the manufacturing sector, where factory headcounts shrank for a third month running. However, the rise in service sector employment was meagre.

With the accumulation of additional workloads in June despite a slower growth in new business intakes, there could be signs of a development of tighter capacity in the economy. However, the rise in backlogs is likely due to firms' desire to smooth business activity over the coming months rather than any bona fide pressure on operating capacity. As such, firms will remain cautious towards hiring in coming months.

For more information about the PMI surveys and the Caixin PMI for China, please contact economics@ihsmarkit.com.