Caixin China PMI signals stabilisation in manufacturing, but no signs of recovery yet

Caixin PMI data, compiled by IHS Markit, indicated that China's manufacturing sector was close to stabilisation at the start of the third quarter. However, forward-looking data underscore how it is far from certain whether a recovery will materialise in coming months, providing food for thought for Chinese policymakers whether additional stimulus measures are needed.

At 49.9, rising from 49.4 in June, the Caixin China Manufacturing PMI remained only marginally below the 50 no-change level in July, signalling broadly unchanged business conditions in the sector.

This raises the question whether a sustained recovery will emerge. However, survey sub-indices were not convincing in showing whether manufacturing conditions will improve in coming months.

Demand conditions in the sector remained muted. While new orders returned to growth, the rate of expansion was only marginal and among the weakest seen so far this year. The order book situation was not helped by a sluggish external sector, as reflected by the PMI export orders index signalling stagnant export order volumes. Respondents continued to highlight the ongoing US-China trade war as the predominant factor weighing on foreign demand. 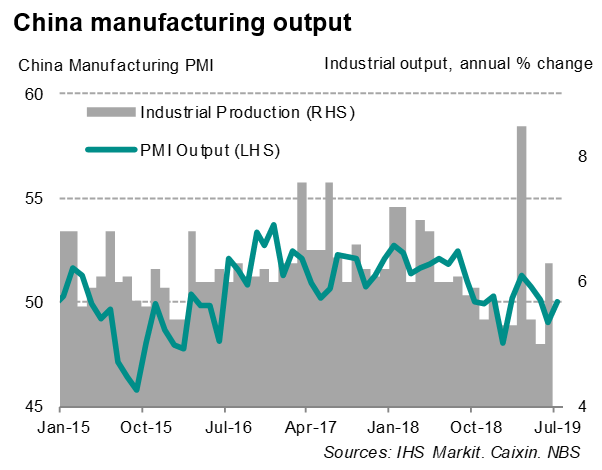 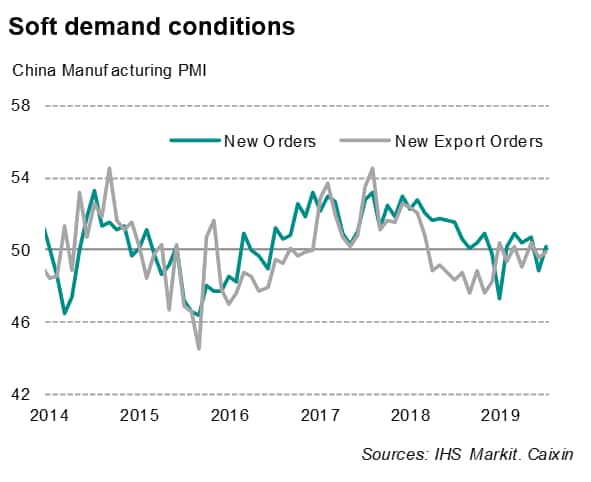 In normal circumstances, subdued sales growth would not stress operating capacity. However, Chinese manufacturers continued to report increasing levels of unfinished work. This rise in backlogs of work was linked to insufficient manpower after years of job shedding. Indeed, firms have been continually reducing manufacturing staff numbers over the past five-and-a-half years, with the sole exception of March this year.

In July, the survey's employment index indicated a steeper downturn in factory jobs, with job losses running higher than the average seen over the first half of the year. Employment fell in response to disappointing order intakes as firms seek to reduce operating overheads.

Business confidence about the year-ahead outlook meanwhile rose to the highest since April yet remained subdued in the context of the series history, with many expressing worries over the impact of the US trade dispute on future output. The recent weakness of business expectations also weighed on hiring and capital investment plans, as indicated by the tri-annual China Business Outlook, compiled by IHS Markit.

The July survey found little evidence of inflationary pressures in the manufacturing sector. Costs rose marginally overall, though the vast majority of firms reported no change in input costs. Meanwhile, prices charged for Chinese manufactured goods fell in July, with the rate of decline the steepest in six months. An increasing number of firms mentioned that price discounts were given to boost competitiveness and attract new business. 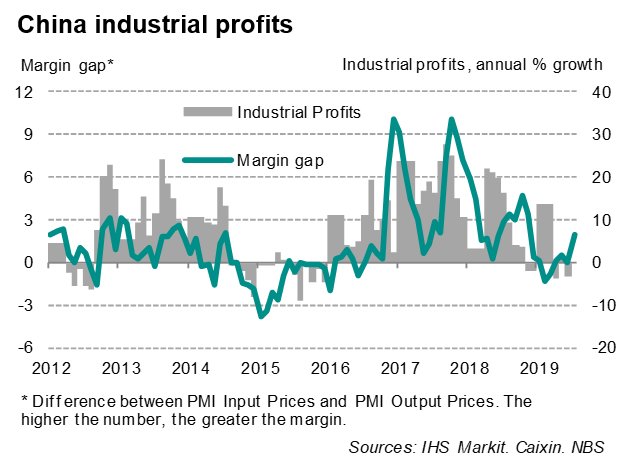 PMI surveys in the coming months will provide important clues for policymakers who are grappling with whether additional stimulus measures are needed to fend off a sharper slowdown. At the mid-year Politburo meeting held recently, the decision-making body of the ruling Communist Party acknowledged that downside pressure on the Chinese economy has increased, but did not announce any new fiscal stimulus measures, other than pledging to boost domestic demand through stepping up reforms in the manufacturing sector.

Current fiscal measures, especially infrastructure spending, may have so far only benefitted certain manufacturing industries, which are typically larger enterprises. A major development in recent months had been the stronger performance of larger manufacturers (over 1,000 employees) in the Caixin PMI survey, where the average reading over the first half of the year indicated modest growth, diverging from the deteriorating fate of small and medium-sized companies. However, a decline of larger firms signalled in July brings their performance more in line with their smaller counterparts.

Next week sees the UK leave the European Union while policy action from the Fed and the Bank of England alongside G… https://t.co/ltZ3svam4t

Flash #Australia #PMI sinks to a survey-record low at start of 2020. However, the survey's more forward-looking ind… https://t.co/7LfvAlaBZx

Positive signs have emerged for #Japan's economy at start of 2020, with flash #PMI pointing to a domestic-led recov… https://t.co/luOGUs8fga

The latest CBA #Australia Flash #PMI signalled a continued decline in business activity in January. In fact, the la… https://t.co/pJ9LHkKrT4