Analysis of survey anecdotal evidence suggests that global business uncertainty spiked higher at the end of 2018 to reach a 22-year survey high. Companies reported heightened political and economic risk and worries about declining exports, according to the PMI survey responses.

IHS Markit's Purchasing Managers' Index® (PMI®) surveys are based on monthly questionnaires of carefully selected companies across over 40 countries. Globally, the surveys compile responses from around 28,000 companies monthly.

The surveys ask contributing companies to report on changes in business metrics such as activity, new orders, exports, input prices, inventories, employment and future expectations. Alongside these responses, panellists are invited to provide additional qualitative information on the reasons as to why these variables have changed from the previous month.

Our panel comments tool collects data tracking the frequency of words or phrases mentioned in the qualitative reasons. Analysing these data over time gives helpful insight into the key trends affecting businesses both nationally and globally, and thereby reveals the driving forces behind changes in the hard data.

Panellists across the world have increasingly highlighted uncertainty when predicting their future output in recent months. December recorded the most mentions of the word "uncertainty" from businesses expecting future output to decrease since the series began in July 1996.1 Moreover, this represented a stark increase from the already high frequency seen throughout the year. 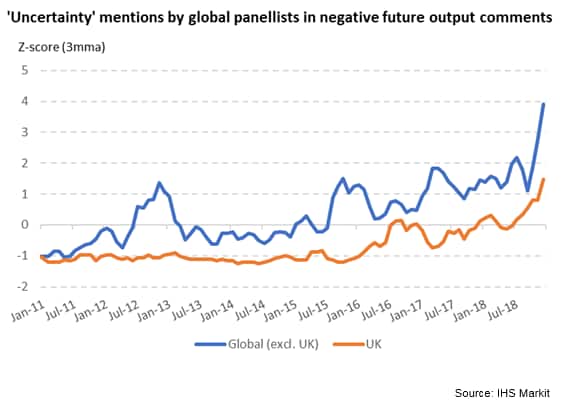 Around 40% of these mentions were from UK companies, often reflecting rising fears of a negative Brexit outcome. Specifically, December saw the most references to "Brexit" yet recorded by the survey in firms' lower future output comments, rising above that seen shortly after the referendum vote. 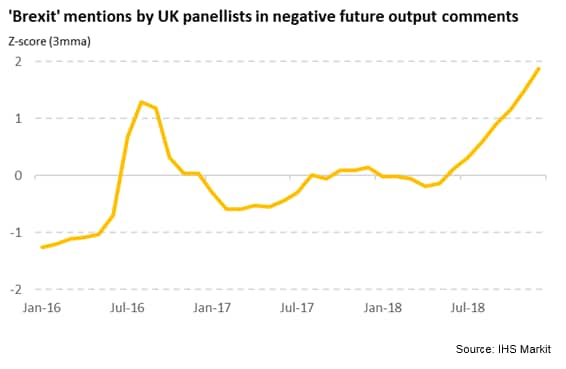 However, outside of the UK, the frequency of "uncertainty" comments was still at its highest in the series' history. Analysing individual comments reveal key factors influencing this uncertainty. Broadly, these consist of political tensions, economic worries and the deteriorating international trade environment.

The downturn in trade has been of notable consequence recently, with the frequency of comments rising sharply. Concurrently, the J.P.Morgan Global Manufacturing PMI™ exports index has signalled a decline in exports for four successive months, prompted by US and Chinese tariffs and slowing output growth.

Panel comments also capture the trends of rising political and economic uncertainty over the course of last year. Mentions of political tension grew to near-peak levels in December, in part due to Brexit and other worries across Europe, but also worldwide political friction. 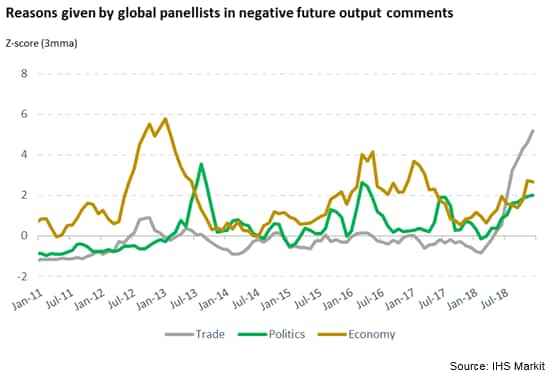 Such uncertainty has led to many businesses expressing doubts about whether conditions will improve during 2019. Our upcoming surveys will lend fresh insight into this impact.