April PMI survey data showed an escalating downturn in the global economy due to the coronavirus disease 2019 (COVID-19) crisis. Worldwide responses to the pandemic highlighted how lockdowns and social distancing measures have led to record slides in business activity and employment, thereby greatly increasing the likelihood of a global recession in 2020.

Against this backdrop, business uncertainty soared to record levels in March and April as shutdowns quickly spread across the globe. Firms are now more fearful than ever of a recession and largely expectant that the downturn will persist throughout the coming year. Manufacturers have caught up with their services counterparts in terms of COVID-induced pessimism, as new export orders data suggest a slump in global demand that could have long-term consequences for goods producers.

The Future Output Index from the J.P. Morgan Global Composite PMI series (compiled by IHS Markit) fell to a record low in April, with more firms expecting activity to decline over the coming 12 months than those anticipating an expansion.

Unsurprisingly, the COVID-19 crisis was the main factor blamed by companies on this pessimism, leading to a huge spike in business uncertainty. Our panel comments tool - which collects data tracking the frequency of words or phrases mentioned in the qualitative replies from our global business surveys - signalled that mentions of 'uncertain' were at their highest ever in March (and second-highest in April).

Driving these tensions was the lack of knowledge over how long the pandemic will last, and thus uncertainty over the potential duration of restrictions on business activity from government mitigation strategies. While some companies hope that domestic lockdowns will be eased in the short run, they also stress the risk that consumer and business demand will take much longer to recover, especially if virus transmission continues. 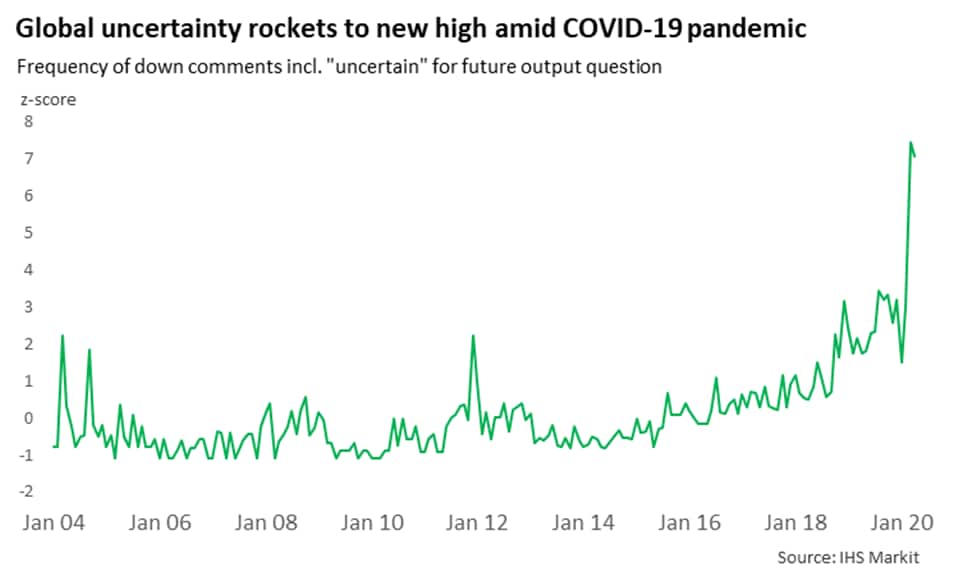 Amid widespread economic uncertainty, businesses are also now more expectant of a recession than ever before, in either a domestic or global setting, with the panel comments tool picking up more mentions of 'recession' from future output comments than seen during the global financial crisis. 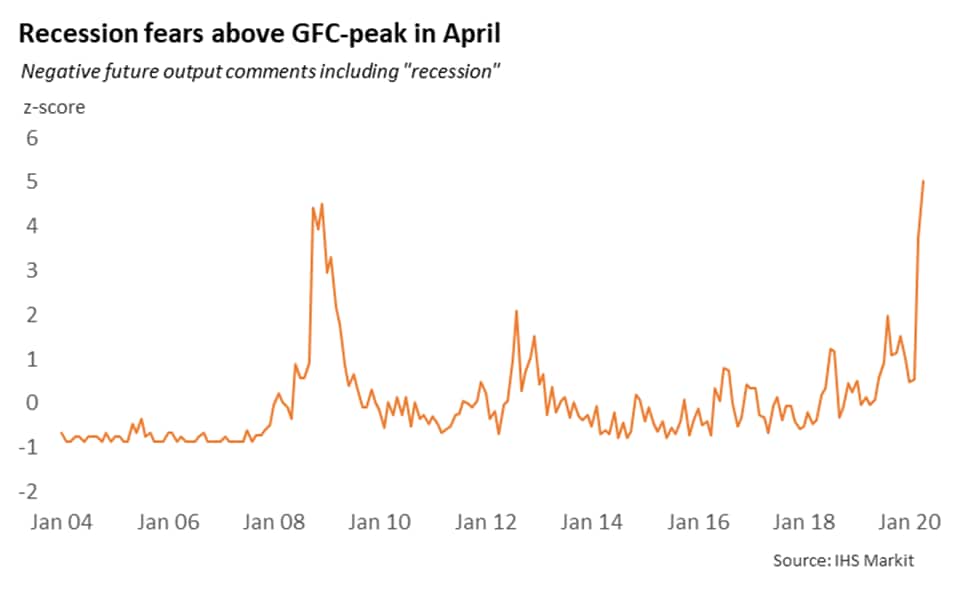 This sentiment is supported by preliminary estimates of contractions across key economies in the first quarter, including in the US, China and Eurozone. These contractions were strong (-4.8% in the US) yet are likely to be eclipsed by unprecedented falls in activity during the second quarter of the year, when lockdowns are expected to have their greatest impact.

Further uncertainty lies beyond the first half of the year. Most businesses now expect an overall decline in activity over the next 12 months which, while partly reflecting the sizeable downturn predicted in Q2, also signals that hopes of a swift rebound (V-shaped recovery) from the current crisis are waning. Despite being the consensus view at the start of the pandemic, many commentators are replacing this with forecasts of a U- or L-shaped recovery that is markedly longer and considers that consumer demand will remain weak for a protracted period.

Overall, companies in many of the major economies hold the view that the negative impact from the COVID-19 crisis will linger throughout the next 12-month period. Isolating only those panel member comments directly linked to the pandemic shows that the most pessimistic countries in relation to its damaging impact in April were Germany, Spain and France, key eurozone nations that have all suffered strict lockdown measures. Many panellists from these countries highlighted that the economic impact from the pandemic is simply unpredictable and that a quick recovery is becoming increasingly unlikely.

That said, comments data suggest some improvement from March, with most composite surveys signalling reduced pessimism in April, particularly as hopes emerged of an easing of lockdown measures. Moreover, nations that managed to reduce the transmission of COVID-19, such as China and Australia, gave a net optimistic outlook toward the next year. 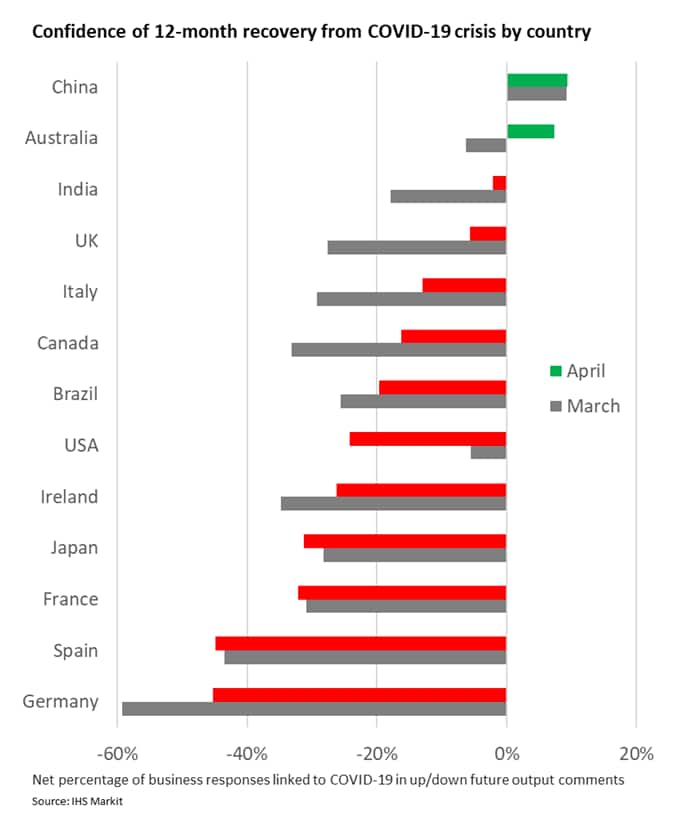 Nevertheless, viewing sentiment by sector shows that negativity is still widespread. Healthcare services was the only sector to signal neutral future sentiment toward the COVID-19 crisis in April, with all other categories giving a net negative response, albeit to a lesser degree than March in some areas.

Notably, the four most pessimistic sectors in March were services, whereas in April pessimism centred on manufacturing. This may reflect growing concerns among goods producers toward the global nature of this crisis as a greater proportion of the industrial sector shuts down. Survey data showed a record drop in global new export orders in April, suggesting that manufacturers are increasingly worried that an easing of domestic restrictions may not bring a swift bounce-back in demand. 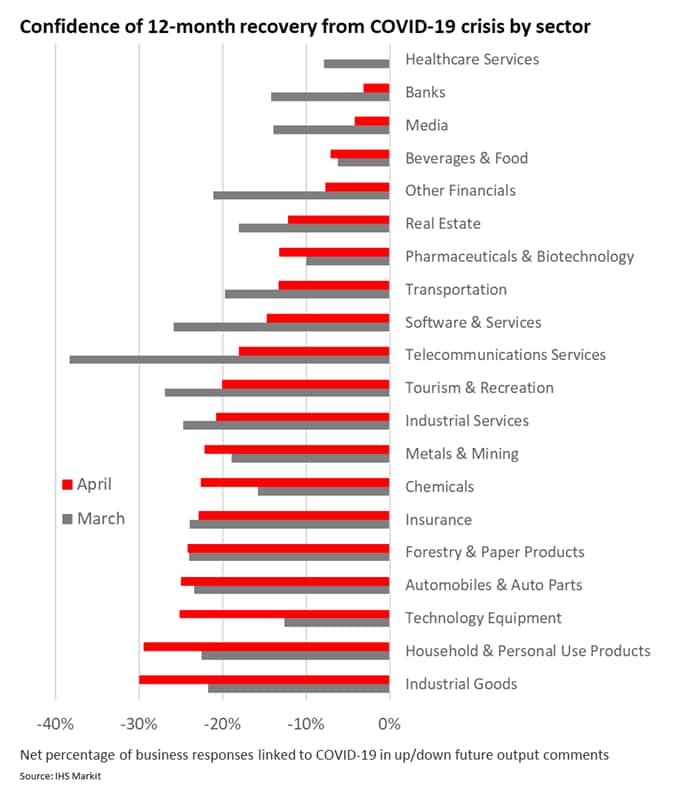 Many places are beginning to ease lockdowns in May, particularly in Europe where the virus has shown signs of peaking, which may lead to a slight drop in business uncertainty in the next survey data as the path to normal life becomes clearer. However, the threat of a global recession on an unprecedented scale remains, alongside the continued risk of a second wave of the COVID-19 pandemic. As a result, firms are likely to remain clouded by ongoing social distancing measures, weak consumer demand and poor export sales, signalling that the outlook for the coming year is unlikely to improve anytime soon.

May Flash PMIs will reveal the first impact of the loosening of restrictions on business activity and sentiment. These are released on 21st May.