Australia saw business activity improve at an increased rate in March, while activity in Japan showed signs of stabilising. The decline in COVID-19 disruptions played a key role in spurring the latest improvements. That said, price pressures intensified amid persistent pandemic-related supply chain constraints and the impact from the Russia-Ukraine war in March. Consequently, business confidence fell amongst private sector firms, with the outlook for future activity falling sharply according to the latest flash PMI data, hinting at a worsening output trend in coming months.

The latest flash PMI data showed Japan's private sector activity recording a smaller decline in March with the au Jibun Bank Flash Japan Composite PMI up at 49.3 from 45.8 previously. This marked a third straight month of contraction but at a shallower pace on the back of the quasi-state of emergency relaxation across Japan. Manufacturing sector output returned to growth while services business activity contracted less sharply compared to February. This coincided with the decline of the COVID-19 Omicron wave in Japan after having peaked in February.

Meanwhile the S&P Global Flash Australia Composite PMI rose to 57.1 in March from 56.6 in February, a 10-month high. Private sector firms reported sustained demand and output growth post the easing of COVID-19 restrictions and the receding of the Omicron wave In March. Expansions were reported across both the manufacturing and service sectors, with services business activity notably rising at the strongest pace since May 2021. 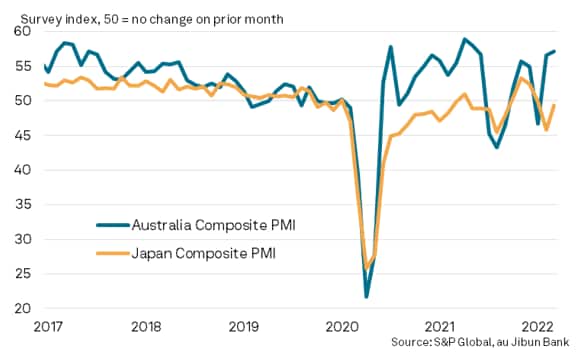 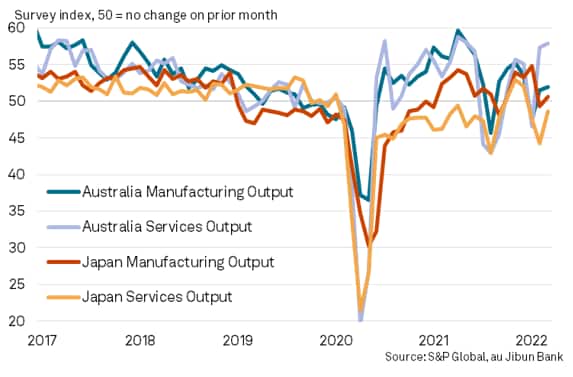 A key development gathered from the March survey was a sharp increase in price pressures for private sector firms across both Japan and Australia.

Both the composite input cost and output price indicators showed record rates of inflation in Australia. Firms reported facing higher costs across a range of categories including fuel and energy, wages and raw material prices. Domestically, flooding issues in Australia over the eastern region and externally, the Ukraine war, had widely been cited as reasons aggravating the cost pressures for Australian firms. It is worth noting that not only has the pressure been severe for the manufacturing sector, according to the flash PMI data, but the service sector has also clearly been feeling the effects of price inflation, with both services input and output prices rising at survey record rates. 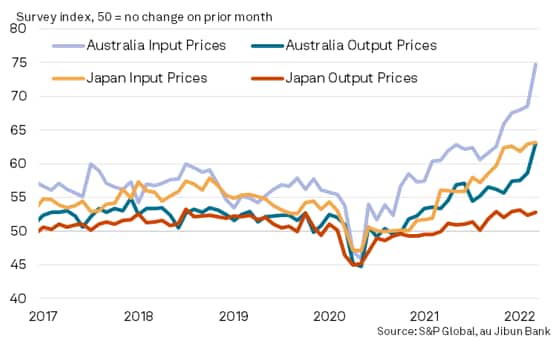 Over in Japan, input costs climbed at the fastest pace since August 2008 with businesses attributing the acceleration in cost inflation to surging raw material prices, notably energy, oil and semiconductors. This was reported to have been related to deteriorating supplier performance in March, a common phenomenon across both Japan and Australia. Over and above the lingering issues of material shortages and delivery delays, firms also cited more recent developments including the Ukraine invasion and lockdowns in China to have led to the deterioration in vendor performance.

This may remain the tip of the iceberg with solid manufacturers' purchasing activity growth seen in March, in part reflecting safety stock building both to safeguard against shortages and future price increases. 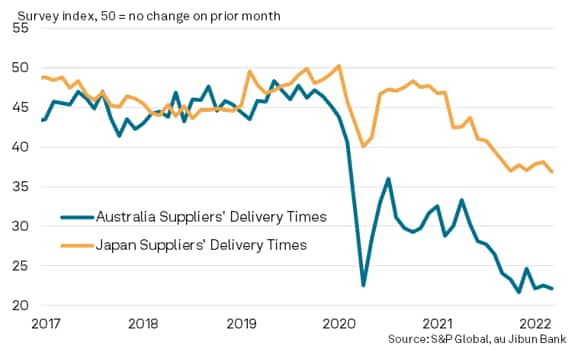 While both Japan and Australia firms maintained a positive outlook in March, the level of business confidence has deteriorated sharply according to the latest survey. The Future Output Index readings in Japan and Australia have fallen to the lowest levels since January 2021 and April 2020 respectively. Companies widely cited concerns over the impact of the Ukraine invasion both upon prices and demand. Firms in Australia also expressed worries over the effect of rising interest rates upon economic conditions in the near future.

Broadly, the improvement in output conditions in both Japan and Australia has been positive signs for APAC economies. Concurrently, demand has remained robust with solid new orders growth in Australia and a return to expansion for Japan's new business inflows in March. However, a renewed rise in COVID-19 infections in Australia may be worth monitoring going forward, in addition to the slew of supply and inflationary issues for private sector firms and geopolitical tensions, even as signs of output growth being impeded remain limited at the moment. 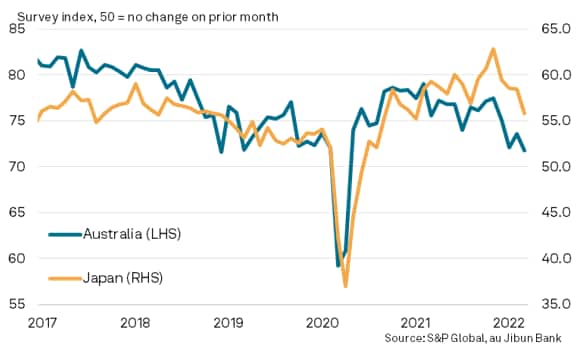 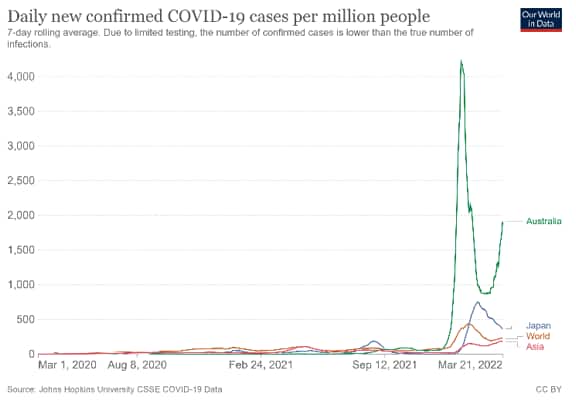