PMI numbers for October and November suggest that further momentum has been gained in the final quarter of 2018. The solid data suggest that Brazil's economic recovery has progressed after political uncertainty and truck drivers' protests subdued business activity earlier in the year, with goods producers, service providers and consumers displaying post-election optimism. The domestic currency has meanwhile firmed compared to pre-balloting rates, while Brazilian stocks have jumped.

In October we introduced a new series of notes on emerging markets, which began by looking at some of those considered most vulnerable at present. One of these was Brazil and this month we examine the latest developments in the nation.

A picture is building of an economy that is regaining growth momentum. After being unchanged for three quarters in a row at just 0.2%, the quarterly rate of GDP growth in Brazil climbed to 0.8% in Q3, its best performance since the start of 2017 when the economy benefited from a booming agricultural sector. Official data revealed a more balanced upturn, with the agriculture & livestock (+0.7%), industry (+0.4%) and service (+0.5%) sectors all showing improvements. Encouragingly, domestic consumption showed signs of revival, while investment rose at the steepest pace since the end of 2009. 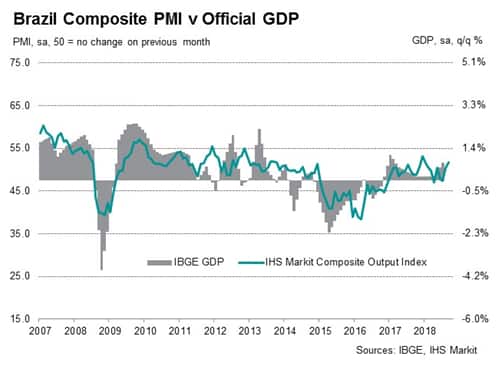 While official results for the fourth quarter are not scheduled for release until 28th February 2019, timely PMI data can offer valuable insight regarding the trajectory the economy is taking. November readings highlighted an accelerated upturn in the combined manufacturing and services activity that was the sharpest since February 2018, building on October's modest increase. 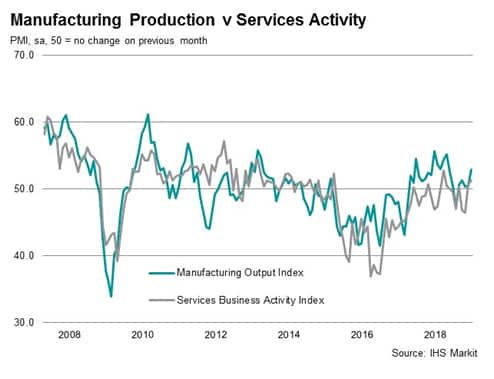 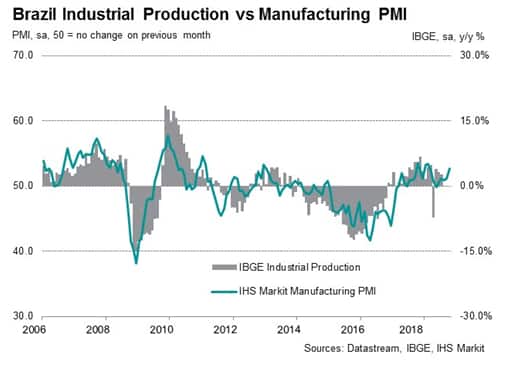 The uptick in growth was underpinned by the steepest rise in new work since March, but jobs declined as service providers became more conscious of their expenses. On the other hand, goods producers continued to lift workforce numbers. 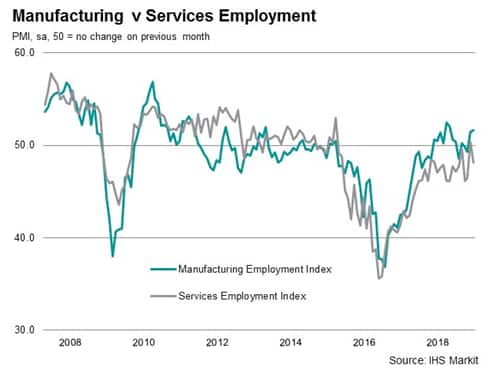 Help to the economy from lower inflation is also evident. Input cost inflation in manufacturing continued to soften from September's PMI survey peak during November. A slower increase was also noted in the service sector, but inflation was above that seen at goods producers for the first time in over a year and surpassed its long-run average.

The official inflation rate also showed signs of abating, easing from a 19-month high of 4.56% in the 12 months to October to 4.05% in November, below the Central Bank's target of 4.5% but above the floor of 3%, meaning further support to the economy can come from relatively low interest rates.

Although it's welcoming to see PMI survey data pointing to a rebound in economic growth, a continuation of this trend is by no means assured. The IHS Markit Global Business Outlook surveys, conducted three times a year, indicated that Brazilian companies are more cheerful towards growth prospects, but such optimism relies on the ability of the government to enact its proposed policies. Firms indicated robust hiring and investment intentions, which bodes well for the outlook, with much of their plans hinging on a stable political environment, tax cuts, greater foreign direct investment and currency strength. Currency stability will depend on international developments and the government's power to pass reforms.

Downside risks to growth prospects therefore include a potential political gridlock and delays in approving reforms. In turn, this can result in tax hikes and cuts to infrastructure spending. Reductions in interest rates could lead capital to flow out of the country, exerting downward pressure on the real and upward pressure to inflation. 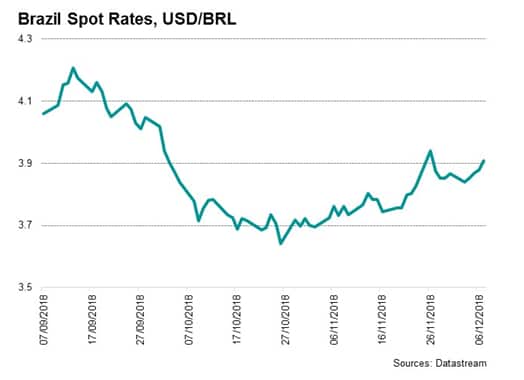 On the flip side, tailwinds include further improvements in business sentiment, assuming reforms are approved quickly. Also, if inflation remains contained, possible cuts to the central bank's policy rate can boost household consumption and ease the burden on government debt. One thing is certain, so far Brazil is heading in the right direction.