Two years ago, South Korean President Moon Jae-In announced that he would like to see his country rely less on coal and nuclear for electricity generation and put forth a target of 20% renewable generation by 2030, up from only 6% in 2018.

To meet the renewable target, 40 Gigawatts (GW) of solar and wind projects would need to be installed by 2030. Will the wholesale power prices reach a level that can incentivize new investment in renewables but avoid creating a political backlash against high retail prices?

To address concerns about a potential rise in electricity prices, the government recently announced a new natural gas price scheme, designed to reduce gas-fired generator's fuel costs. The policy enables the state-owned Korea Gas Corporation (KOGAS)—currently the monopoly reseller of imported LNG within South Korea—to supply gas to generators priced on a per contract basis rather than the current regulated price based on KOGAS's total average import costs.

Moreover, over 13 GW of new nuclear and coal power plants are expected to come online in the next five years (they had been under construction before President Moon's term), adding downward pressure on the system marginal price (SMP), the wholesale price in the Korean Power Exchange. The decline in power demand caused by COVID-19 can also have a moderating effect on power prices in the months ahead as restriction policies remain in place. 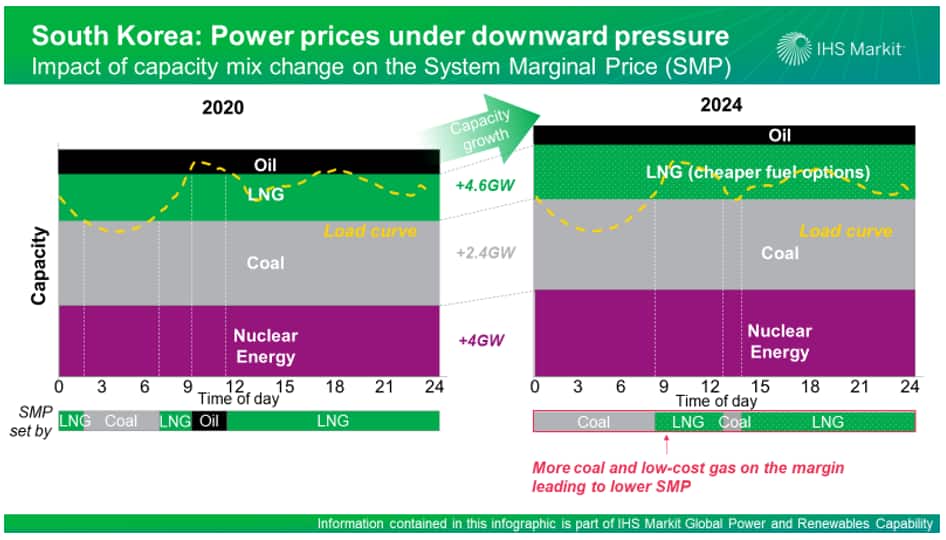 However, over the long-term there are other policy and market factors which will can make the SMP fluctuate both ways.

Typically, gas-fired power plants are the marginal generators determining the SMP in the Korean Power Exchange, with the cost of imported LNG a key influencer. Therefore, expected fuel prices, the gas tariff structure, capacity mix, and power demand are among the key variables needed to understand the potential direction of South Korea's power prices.

Today, the levelized cost of energy (LCOE) for solar and offshore wind is about $100/MWh and $210/MWh, respectively. Although they are expected to drop by about 30% by 2030, the profit margin for new renewables project is likely to be squeezed because of the drop in the SMP in the next few years along with the plunging renewable energy credit prices.

Therefore, additional government support will be needed to meet the 2030 renewable target. Authorities are starting to act. For instance, the Ministry of Trade, Industry, and Energy (MOTIE) is a drafting a plan to include carbon prices in the power dispatch mechanism; the seasonal shutdown of coal-fired power plants could also put upward pressure on the SMP, which would help renewables.

IHS Markit experts are available for consultation on the industries and subjects they specialize in. Meetings are virtual and can be tailored to focus on your areas of inquiry. Book in a consultation with Vince Heo.

Vince Heo is an Associate Director and research lead in Asia gas and power at IHS Markit.

RT @IHSMarkitAuto: Our analysts project annual global demand for lithium-ion #batteries will rise from about 230 GWh in 2020 to nearly 1,70…

US project-specific corporate #renewables demand is projected to more than double to $17 billion over the next deca… https://t.co/6sPyTFmmdd