On 1 October, the Buenos Aires provincial prosecutor's office released data that revealed a 3.8% increase in overall crimes reported in the province in 2016 compared with the previous year (746,952 cases, versus 719,728 in 2015); the rise principally occurred within kidnapping and drug-related crimes. The data align with federal government figures, which show an increase in theft and robberies, but a reduction in murders since 2014. The current administration resumed the publication of crime statistics in 2016 (retroactively from 2014), as the previous government of Cristina Fernández de Kirchner ceased publishing these data in 2008.

High-profile kidnappings in Buenos Aires during the past two years highlight an increasing risk, mainly in the metropolitan area. These are perpetrated by gangs of at least three people, and target wealthy individuals travelling in expensive cars. The gangs intercept the victims, threaten them at gunpoint, and drive them around in their vehicles while they contact family members to demand a ransom. The victims are typically held for hours - rarely longer than 24 hours - and ransom is paid in 70% of cases, according to UFESE, with demands ranging from USD500-140,000. The use of lethal violence is uncommon, but there is a risk of gunfire exchanges between the criminals and police. There is also a risk of express kidnapping to individuals regarded as wealthy, who are held for a number of hours and forced to withdraw money from cash machines.

Murder rates are declining, but theft and robberies are increasing

Government figures show that murder rates in Buenos Aires City declined by 42% in 2016 (95 cases) compared with 2015 (165 cases), representing a murder rate of 3.28 per 100,000 people - slightly higher than Santiago, Chile, (with a rate of three murders per 100,000), but lower than Bogotá, Colombia, with 15.8, and far lower than Caracas, Venezuela (the world's highest), with 130 per 100,000. Most homicides were concentrated in slums ("villas"), mainly Villa 31/31 bis in Retiro and Villa 1-11-14 in Bajo Flores. The Flores borough is a hot spot, recording 37 murders in 2015 and 16 in 2016; violence in slums involves mainly shootings between rival drug-trafficking gangs. In the wider metropolitan area, murder hot spots include La Matanza, Lomas de Zamora, Morón, and San Martín, mainly involving armed robberies. 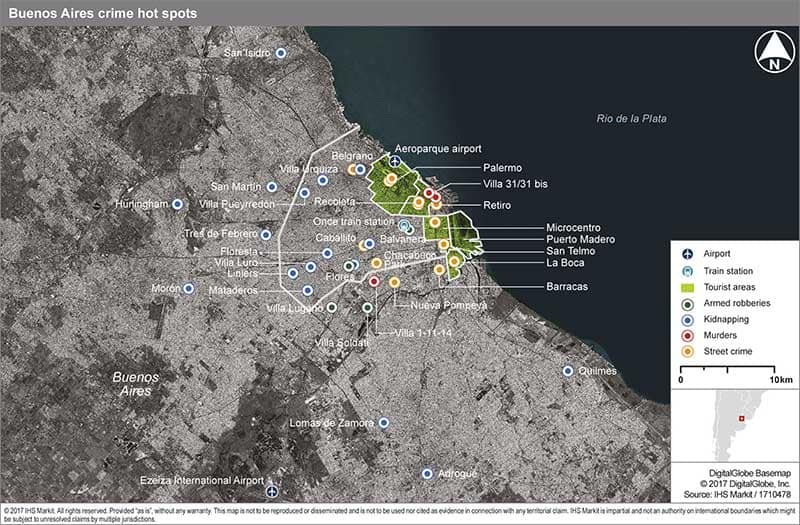 Robberies and thefts have increased in Buenos Aires since 2014, including pickpocketing and bag-snatching. This includes tourist areas, such as Palermo, Puerto Madero, Recoleta, San Telmo, La Boca, and the Microcentro (downtown Buenos Aires, including the pedestrianised Florida street). The main targets are individuals displaying valuables - such as expensive watches, jewellery, mobile phones, and cameras - or carrying backpacks or luggage; those withdrawing money from cash machines or exiting banks are also targets. Although most victims do not suffer injuries, criminals are often armed, raising death and injury risks, particularly if the victim resists the robbery. According to Buenos Aires provincial official figures, the January-May 2017 period saw 160 cases of armed robberies per day, up from 142 in 2016, and 131 in 2015.

A major concern involves "motochorros", pairs of criminals on motorbikes snatching belongings of passers-by on the streets. Residents are also at risk of "entraderas" - armed criminals threatening a person while entering their homes, in order to force their way in and rob the property. Hot spots include Palermo, Recoleta, Belgrano, and Flores.

Crime risks in Buenos Aires are unlikely to significantly decline in the one-year outlook, as security measures will take some time to produce material effects. These include a new 25,000-strong city police force launched in January 2017, integrated by members of the Federal Police and the Metropolitan Police. However, the force has suffered several setbacks; one of the project's aims was to reduce corruption within the force, but its head José Pedro Potocar was arrested in April 2017 on corruption charges (Potocar denies all charges).

Buenos Aires will remain one of the safest major cities in Latin America, despite visible cases - such as kidnappings, entraderas, and motochorros - reported in the media, increasing perceptions of insecurity. Opportunistic theft and robberies, and express kidnappings will remain the greatest concerns for residents and visitors.

A major indicator of reduced crime risks would be increased police deployment in problematic areas, which often lack capacity and surveillance, mainly at night. In La Matanza, for example, media reported just 249 police officers per 100,000 residents - a low ratio compared with the 816 police officers per 100,000 in the City of Buenos Aires, despite La Matanza's higher murder rates. In late September, new police stations were inaugurated in Morón, likely contributing to containment of crime risks.

The announcement of further targeted security measures will provide a further indicator of a reduction in crime risks. These have included increased CCTV coverage, and using drones and a hot-air balloon to improve air surveillance. Buenos Aires city authorities have prohibited pairs of people circulating on motorbikes in certain districts, and have obliged motorcyclists to display their licence plates on their reflective vests in order to dissuade attacks by motochorros. These types of measures will contribute to mitigating the targeted risks, but are likely to displace crime away from the Microcentro to other areas of the city.