Bubble trouble: Europe’s house price boom back in the spotlight

House price surge steps up, with some national variations

House prices in the eurozone increased by 8.8% y/y in Q3 2021, up by two percentage points versus the prior quarter and the fastest rate of increase in the series' history (which goes back to 2005). 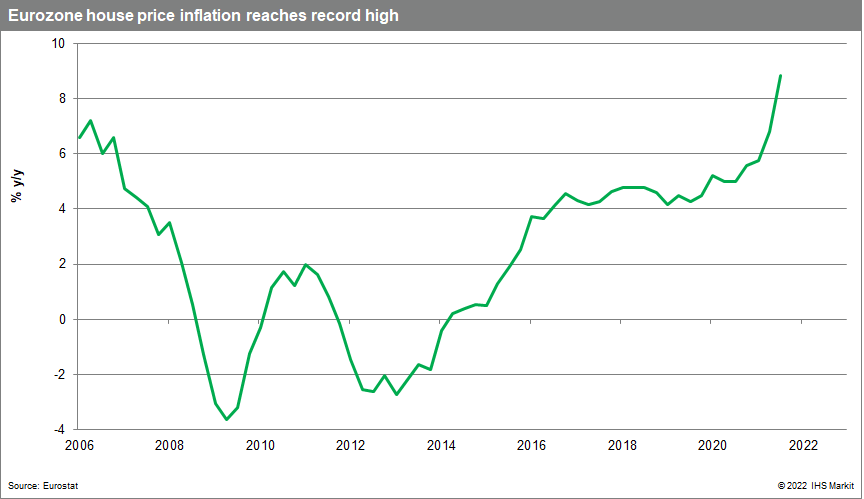 The y/y rate of increase has picked up in seven of the past eight quarters. Unlike some other indicators, the exceptionally strong y/y rates of increases in house prices are not a result of base effects. Q3 2021's q/q increase was 3.3%, following a 2.6% gain the prior quarter, the biggest back-to-back increases on record.

The strength in Q3 2021's data was broad-based across most of the eurozone, with nine of the eighteen member states for which data are available (Greece is the exception) showing y/y increases in double digits. In general, though not uniformly, there has been a divide between house price dynamics in the more northerly member states and those in the south, with the latter having suffered lasting damage in the period after the post-Global Financial Crisis as the bubbles which built up beforehand burst with devastating consequences. Still, while comparatively low, even in the southern member states, y/y rates of increase in house prices have also been picking up in recent quarters.

Rising house prices are not a recent development in the eurozone. Prices have been increasing on a q/q basis since the start of 2015, consistent with very accommodative monetary policy, reflected in record low-interest rates and favorable credit conditions.

What is relatively new is the acceleration in the pace of the house price increases in many member states since the start of the COVID-19 pandemic, as demand for accommodation has strengthened while monetary policy has remained ultra-stimulative.

For the eurozone overall, the increase in house prices since Q4 2019 is over 13%. The cumulative gains have been much larger in many northern member states, exceeding 25% in Luxembourg and Lithuania and 20% in the Netherlands and Austria, with Germany not far behind.

In the southern member states, the equivalent increases have generally been smaller, though there are some exceptions, including Portugal (up by almost 17%). 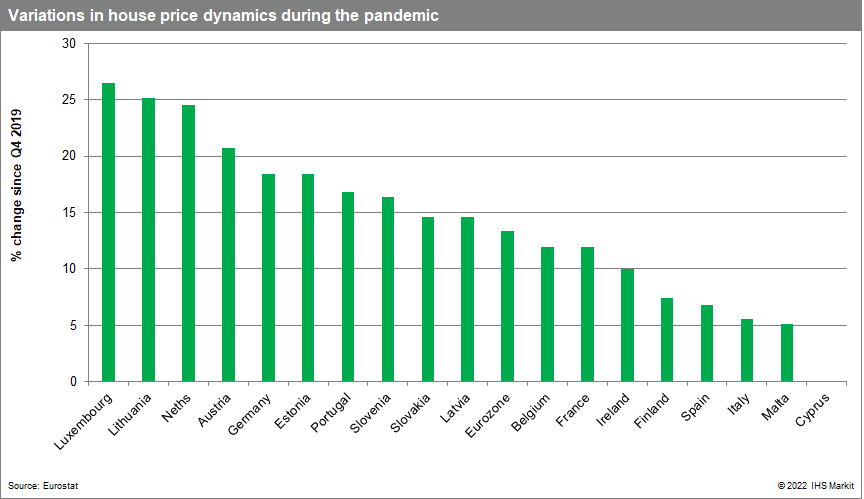 In a recent Special Report, we looked at the drivers of past and future house price growth in the eurozone and EU, concluding that a moderation in house price inflation was likely given the improved macroprudential framework in Europe, increased supply of housing, and the bottoming out of interest rates.

Still, some countries look more vulnerable than others to a 'boom and bust' scenario due to excessive price growth and high household debt. IHS Markit's housing market 'heat' index highlighted particular vulnerabilities in Luxembourg, Sweden, the Netherlands, Czechia, and Denmark.

The higher rates of increase in house prices across the eurozone and EU during the pandemic have generally been accompanied by rising of household mortgage lending growth. However, bank lending data have started to show some signs of cooling off in recent months. In six of the eurozone's largest eleven member states, the y/y rates of increase in household mortgage lending in November 2021 had slowed compared to prior months' peaks. 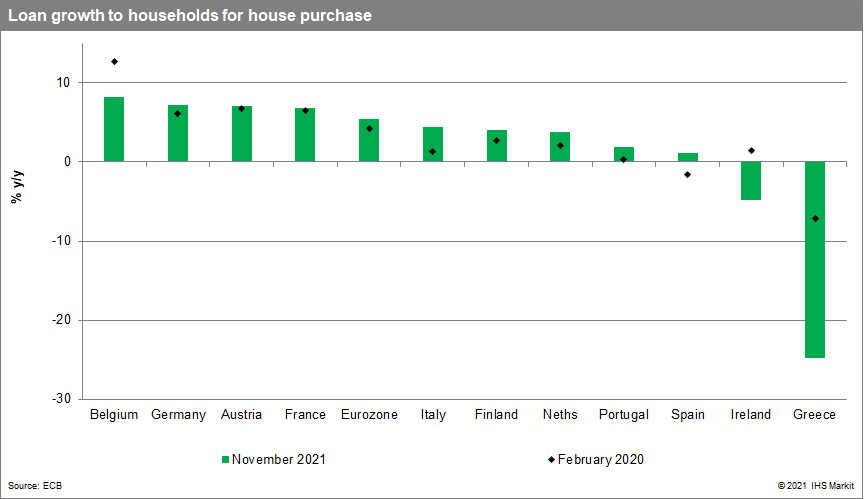 Regarding the monetary policy implications, the surge in eurozone house prices, and broader inflation of asset prices, have been generating concern on the ECB's Governing Council for some time, exacerbated more recently by worries about very elevated consumer price inflation rates.

This has resulted in a scaling back of the ECB's net asset purchases, though they are still scheduled to continue until at least October 2022. The bar for policy rate hikes has also been set rather high. This suggests that the likelihood of radical ECB action to tackle the boom in house prices remains rather low near-term, implying heightened stability risks in the long-term.