The latest Brexit delay has caused further stress in Irish firms operating in sectors more exposed1 to the UK, according to IHS Markit PMI data. Moreover, Brexit uncertainty has caused firms in those sectors to report marked levels of stock-building in recent months.

The outperformance of Irish companies deemed to be less exposed to Brexit over their 'most exposed' peers continued into the second quarter of 2019. April saw the PMI survey's Output Index for 'most exposed' sectors drop some 5.8 index points below that of the 'less exposed' sectors. The underperformance has worsened so far in 2019 compared to an average 4.2 points spread recorded since the EU referendum, suggesting that Brexit is having an increasingly adverse impact on companies most exposed to the UK. Consequently, trends in output worsened during the first quarter of 2019, with April marking the fourth month out of the last seven that a contraction in output among the 'most exposed sectors' had been recorded. 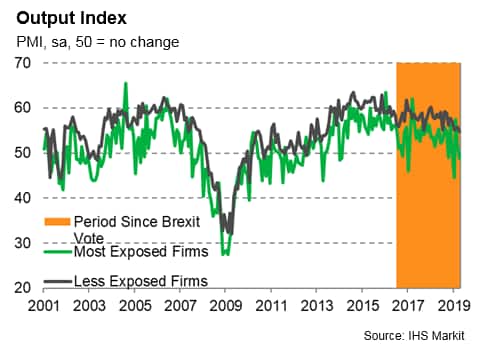 Divergent trends were also evident with regards to inflows of new business. April saw the New Orders Index for 'most exposed' sectors drop 5.9 index points below that for 'less exposed' companies, a much greater divergence than the average of 3.8 index points observed since the start of 2001.

With the delay of Brexit to 31st October, the demand backdrop for firms in sectors 'most exposed' to Brexit appears to be deteriorating. April saw the second consecutive decline in overall new orders among 'most exposed' companies. Firms operating in 'less exposed' sectors, on the other hand, reported a marked improvement in demand conditions throughout the first quarter of 2019 and in April. 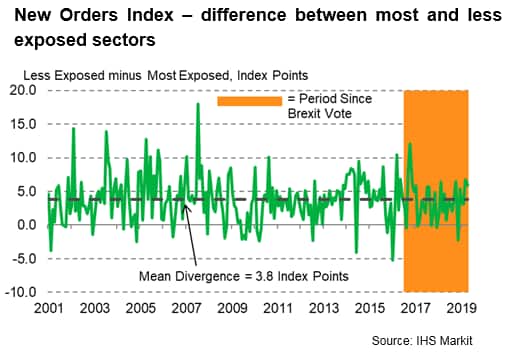 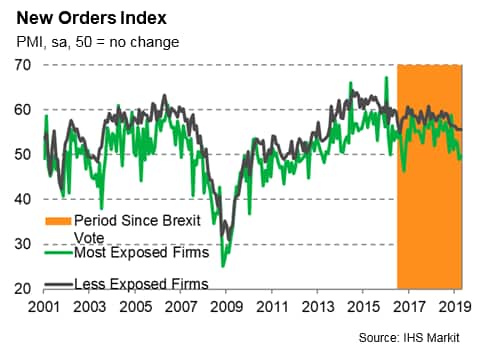 When looking at export sales, companies in 'more exposed' to Brexit sectors recorded the sharpest contraction in overseas business for exactly ten years in April. This contrasted with firms in 'less exposed' sectors which recorded a solid rise in export orders. This could be due to the completion of pre-Brexit stockpiling by firms in the UK and around the world.

With extensive help and support from both the Irish government and the state export development agency (Enterprise Ireland), firms in Ireland have access to tools to help offset the effect of Brexit on their supply chains through informative articles, market access plans and a 'Be Prepared Grant' of 5,000 euros for firms to produce a Brexit readiness plan, including stock building.

Firms in sectors deemed more exposed to Brexit have experienced a marked increase in stock-building activity since the EU referendum.

Moreover, inventory building both of raw materials and finished goods have increased sharply in recent months. Firms in sectors most exposed to Brexit recorded the fastest increase in pre-production inventories on record during December 2018. 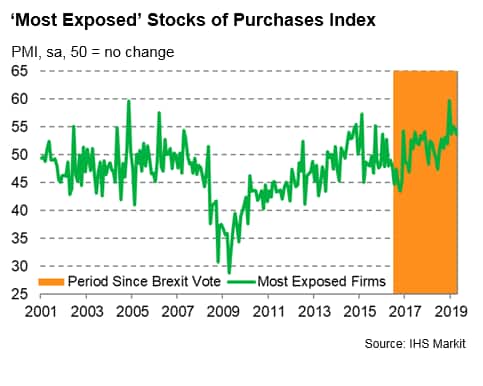 With the delay of Brexit until October, stock-building efforts among 'more exposed' firms look set to be higher than average levels until certainty regarding future trading conditions is assured.

Business confidence among firms in 'more exposed' sectors has deteriorated notably so far in 2019. The PMI Future Output Index registered 63.2 in April, well below its long-run series average of 69.4. 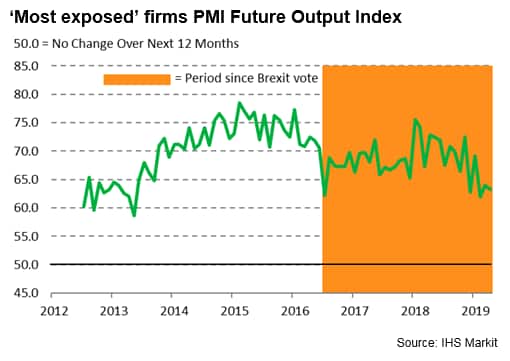 Continuing Brexit uncertainty and the slowdown in European demand conditions look set to provide headwinds for Irish companies in the next 12 months. The wider Irish economy is consequently expected to grow at a slower pace in 2019, with IHS Markit forecasting GDP growth of 0.6% in Q2 2019 compared to 1.2% in the first quarter.

However, despite easing, the forecasted rates of GDP growth still place Ireland as one of the fastest-growing eurozone economies, with a highly skilled workforce and strong inflows of foreign investment contributing to sustained growth of Ireland's economy throughout the rest of 2019.

1These sectors include manufacturing of food and metal products as well as transport industries.