Brexit and the UK economic impact

The UK parliament has ratified the renegotiated Withdrawal Agreement, which allowed the United Kingdom to leave the European Union on 31 January 2020. It was hoped that this would help push the risk of a disorderly Brexit into the long grass and could be a first step towards restoring business confidence and repairing the investment malaise. However, new Brexit uncertainties are sounding on the risk radar, namely whether the 11-month transition period is sufficient to deliver an agreement on the future UK-EU relationship, and whether it is the right deal for UK firms. With both sides distracted by the COVID-19 virus crisis, talks to determine the future UK-EU relationship have failed to make any significant progress. 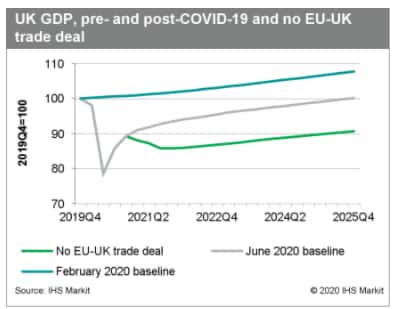 Even without considering the implications of a "no EU-UK trade deal" outcome, the UK economy is experiencing an unprecedented downturn in 2020.

Failed EU-UK trade negotiations could spark a new UK recession during 2021, with the economy scarred by the COVID-19 shock.

Can the 90-day sprint to try to untangle the gigantic snags in global trade work? Insightful op-ed from Daniel Yerg… https://t.co/Yx7FkKpBwC

From our MPI and Weekly Pricing Pulse: Metal prices jump on higher energy costs and mandated cuts in electricity us… https://t.co/g5vcwNzPEv