Brexit and the economic consequences

UK prime minister Theresa May has obtained cabinet support for a draft Brexit withdrawal agreement designed to permit an orderly UK exit from the European Union (EU) on 29 March 2019, followed by a transition period scheduled to end in December 2020. In addition, the UK and EU issued a political declaration to work towards a relatively harmonious relationship covering the key areas of trade in goods, customs union, and services.

But, the Brexit deal led to several ministerial resignations from May's government, followed by her postponing the first parliamentary vote on the agreement, fearing it would be lost.

The vote will now take place the week beginning of January 14, 2019. Although the risk of the UK leaving the EU without a deal is unwanted both sides, it remains elevated as any eventual parliamentary rejection of the Brexit agreement would prove disruptive to overall procedures.

The withdrawal agreement and the political declaration are broadly aligned with our baseline view, implying no significant impact on our short-term growth projections. We assume that the UK and EU will converge on some free-trade agreement for goods, alongside specific sector agreements for UK service providers to access parts of the Single Market.

There is some uncertainty regarding UK growth in early 2019.

Growth is expected to accelerate to 1.3% in 2020, helped by greater clarity about the Brexit end-game. Still, risks are significant, and our main concern is that the political declaration on the future UK-EU relationship is not legally binding and faces a prolonged period of complex negotiations, generating continued uncertainty.

The withdrawal agreement and political declaration are broadly supportive outcome the UK, but some economic losses are inevitable when compared with a scenario whereby the UK remains a full member of the EU. We believe that any future trade agreement will fall short of the "frictionless arrangements" that the UK currently enjoys as part of the Customs Union and Single Market. The principle of equivalence for the trade in services in general represents some risk to UK exports of services to the EU.

We acknowledge that parliamentary rejection of the deal would keep the risk elevated of the UK leaving the EU without any arrangements in place.

Our scenario predicts that the economic consequences of a no-deal Brexit would be damaging. The UK economy lacks sufficient strength to absorb the full impact of a chaotic Brexit. Firms would face new trade tariffs, potentially severe cross-border delays, and disrupted domestic supply chains, prompting the delay or cancellation of investment projects and recruitment. In addition, the household economy would be hit via substantial real income and wealth losses.

Sterling would depreciate notably in the immediate aftermath of Brexit without a deal, with markets expecting significant damage to the UK economy. Sterling has lost its safe-haven characteristics since the June 2016 Brexit referendum result. 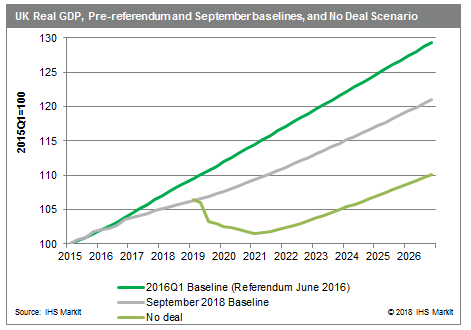