Brazil is the major truck producer in South America and accounts for 90% of the total medium and heavy trucks produced in the region. After a severe impact owing to the Covid-19 pandemic, truck production in 2020 remained shy of 90,000 trucks for the year. The year 2021 came in with high hopes for normalization. Vaccination rollouts in the country and globally decreased the possibility of complete lockdown implementations by the government to curb the rising pandemic.

The first sign of Brazil's surprisingly strong 2021 performance emerged early. In March and April 2021, major Brazilian truck manufacturers including Volvo, Scania, Mercedes Benz, and Volkswagen made announcements to temporarily cease operations in their truck manufacturing plants citing two major reasons: increasing number of COVID-19 cases and a lack of semiconductor parts used in the manufacturing of vehicles. These closures, however, had no significant impact on the overall production. On the contrary, a significant increase in production from 12,300 units in March, to 14,700 units in August was observed. Year-to-date production actuals from January till August 2021 touch almost 102,000 units, showing immense growth and signifying an increase in production line rates across Brazilian truck OEMs. This growth in production is boosted by the demand from the agriculture sector for heavy trucks and the e-commerce sector for medium trucks. 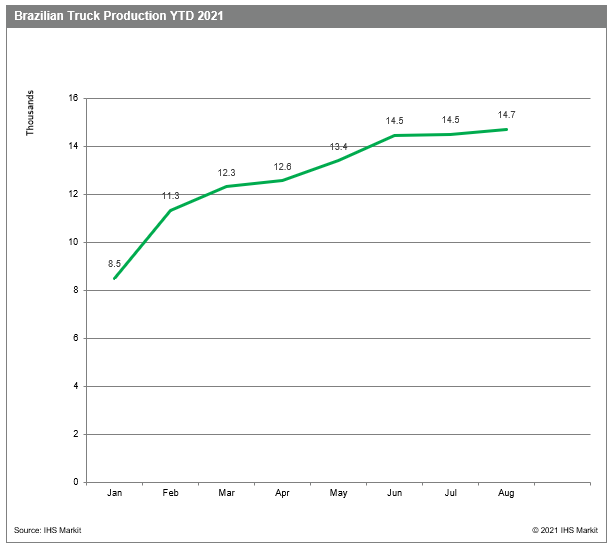 It was not until September 2021 that semiconductor part scarcities started to limit truck production in Brazil. Major OEMs including Scania, Mercedes Benz, Volkswagen, and MAN announced to likely see downtimes in their Brazilian truck manufacturing plants owing to part shortages. It is unlikely that the manufacturers will be able to defy gravity a second time, after their strong first-half performance. IHS Markit expects the semiconductor part shortages to continue for the next three quarters to the mid of 2022. Expected recovery in truck production activities starts from Q3 2022, post the global supply chain for semiconductor parts normalizes.

IHS Markit forecasted the overall truck production to reach upwards of 132,000 units in 2021 in Brazil in our Q3 release (August). On the strength of the unexpected year to date, overall 2021 production volume now is expected to increase further and touch the 148,000-unit mark despite semiconductor part shortages hindering truck production activities in the country. Without the shortage, a higher output would be realized.