Even as the oil and gas sector positions itself for the transition to a lower carbon future, oil and gas production is still expected to play a prominent role in the decades ahead. One key area expected to see rapid development is the world-class presalt resource base in Brazil. Concentrated in the Santos Basin, presalt output is forecast to more than double in the next decade. The deepwater expertise of Petrobras—coupled with contributions from integrated oil companies (IOCs) and national oil companies (NOCs)—are expected to drive presalt production growth.

Petrobras remains the dominant stakeholder in the Brazilian presalt play. Over the next decade, the presalt will account for 72% of the company's sanctioned production. At year-end 2020, we estimate that Petrobras's vast nonproven presalt base accounted for close to half of the company's upstream valuation. After Petrobras, Royal Dutch Shell is the largest stakeholder in the play, mainly from assets garnered through the BG Group acquisition in 2015. Despite the company's significant push into the energy transition, Brazil remains one of its nine core upstream positions and will provide strong volumetric and cash flow growth through the decade. The scale of the resource base, along with a series of bid rounds and the growing role of partnerships in the presalt, continue to attract foreign companies to Brazil. Among a group of nine foreign companies with operations in the presalt, 10% of their conventional new source liquid volumes worldwide are forecast to come from the Brazilian presalt over 2021-25; this figure rises to 16% over 2026-30.

The forecasted presalt growth highlights the competitiveness of the play's projects within the portfolios of IOCs and NOCs. The sheer size of the presalt resource base yet to be developed provides the potential for high returns in the near term and high value growth for companies in the long term. Furthermore, the presalt provides benefits that could make its production resilient in the face of the low-carbon transition. First, breakeven prices in the presalt are some of the lowest for deepwater basins worldwide and could make its development remain profitable in the face of long-term oil price uncertainty. Second, prolific production potential from individual wells and FPSOs could drive down increasingly important carbon intensity metrics for oil and gas companies. 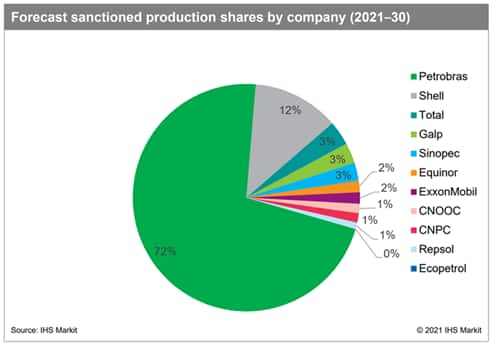 Brazil has dominated the upstream M&A landscape in Latin America over the past decade and the presalt play has been a significant contributing factor. Since 2010, 17% of total transaction value and nearly one-third of deal count in Brazil have been related to the presalt; these numbers rise significantly when including the various transfer of rights deals. During this period, there have been two waves of M&A activity, with the first wave driven by the entry of Chinese NOCs wanting to broaden their deepwater exposure and the second wave driven by efforts of companies to deleverage and rationalize portfolios following the price collapse of the mid-2010s. 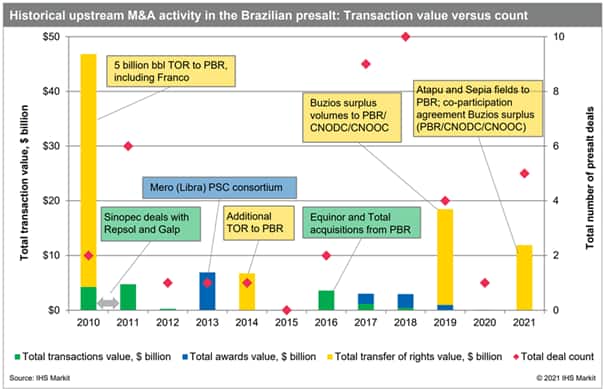 Although there could be some sell-downs/farm-outs in the future, we do not expect the competitive landscape to shift drastically. Later in 2021, a seventeenth bid round will auction off blocks that border the so-called presalt polygon, while a special bid round will be held for surplus volumes in the Sépia and Atapu fields. These two rounds will be an important indicator of the plans not only for Petrobras, but also the appetite on the part of foreign companies for continued exploration and development in the presalt. Regardless, the Brazilian presalt will remain a key strategic component for many of the large IOCs and NOCs over the longer-term.