In the first half of 2020, the COVID-19 pandemic put the brakes on several seismic projects in Brazil. Now, as we look toward 2021, the country will shortly occupy a sizable portion of the active global fleet.

TGS has announced it will utilise COSL vessel Hai Yang Shi You 720 on a dual-azimuth survey in the Espirito Santo Basin, which is likely to lead into other such projects, given the journey from China. Likewise, BGP Pioneer will acquire 7,000 km of 2D data for TGS in the Pelotas Basin from the first quarter of next year, with several other potential surveys to follow.

The Norwegian multi-client specialist is also using BGP Prospector in Argentina's Malvinas Basin for the next three months, at which point it may also head to Brazil. The vessel is earmarked for ION Geophysical's proposed 17,200 sq. km shoot in the Campos Basin, pencilled in for next year. Further surveys in Argentina may also emerge, with Shearwater GeoServices a decent bet to pick up this work.

CGG is continuing its Nebula 3D multi-client programme in Brazil's Santos and Campos Basins, using Oceanic Sirius, part of the fleet sold by the firm to Shearwater in 2019. The first phase of acquisition covered 17,700 sq. km with new data, while the latest 10,000 sq. km addition will provide dual-azimuth imaging by layering over current broadband data.

PGS recently joined the fray with Ramform Titan arriving in the Campos Basin to complete its GeoStreamer X project, put on hold in May after a logistically demanding three months of acquisition during the first wave of the pandemic. 8,400 sq. km remains to be acquired, which may leave time for another shoot before the vessel's likely departure to Canada in May or June. PGS has several applications outstanding with Brazilian regulator IBAMA, and has approval to proceed with the 5,600 sq. km Pirambu SW survey.

An enormous wide-azimuth and OBN programme could see WesternGeco return to multi-client operations in Brazil in 2021. More than 57,000 sq. km of wide-azimuth acquisition and almost 14,000 sq. km of nodal coverage might be undertaken in the Campos Basin, should the company proceed - two years of potential work for the lucky contractor (Shearwater GeoServices, most likely). 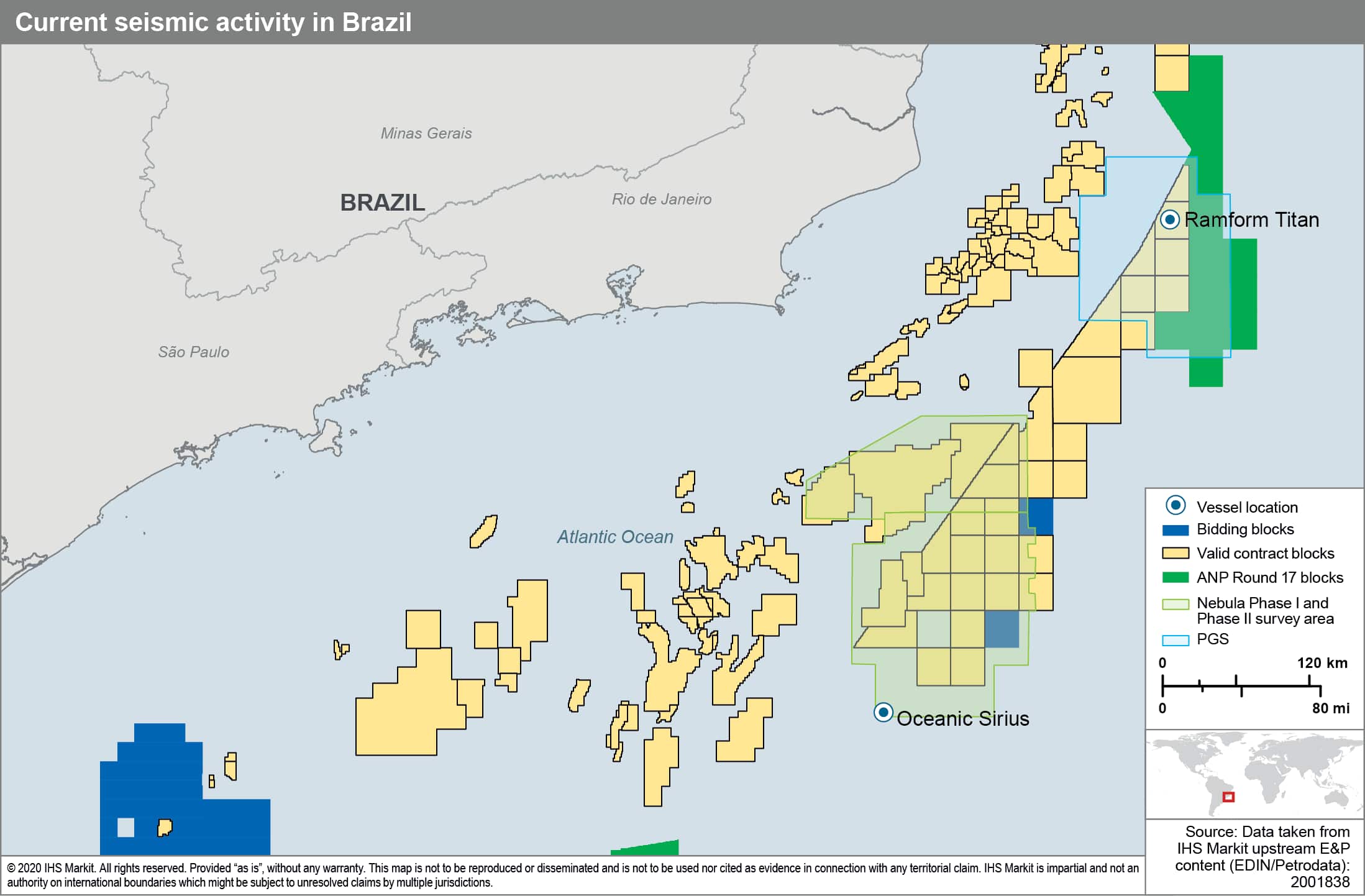 The driving factor in this glut of activity is the forthcoming 17th Bidding Round, delayed until mid-2021 from this year. A total of 96 blocks, covering 54,000 sq. km, is on offer in the Santos, Campos, Pelotas and Potiguar Basins. This will be followed in 2022 by the 18th Round, which will take in acreage in the Ceara, Espirito Santo and Pelotas Basins. The 7th and 8th Production Sharing Bidding Rounds in the pre-salt areas of the Santos and Campos Basins will also be of interest, although the scale of new data required will be somewhat smaller.

In terms of proprietary acquisition, Petrobras dominates proceedings. Polarcus Naila commenced a 10-month 4D programme in October for the firm, taking in the Albacora, Marlim and Voador fields; Polarcus Alima is joining for a month of undershooting in December.

Next year will see Petrobras make a start on its backlog of OBN projects. Seabed Geosolutions will commence an eight-month project in Q2 including a 4D survey over the Parque das Baleias cluster in the Campos Basin and a 3D survey over the Golfinho field. Shearwater GeoServices will work on a three-month 4D survey over the Jubarte field, set for the first half of 2021. Several years' worth of work has still to be awarded, comprising baseline and monitor surveys over the Sapinhoa, Lula, Itapu, Tres Marias, Uirapuru, Sagitario, Iara, Buzios, and Jupiter fields.

Seabed Geosolutions also had a four-month OBN contract over Equinor's Carcara block postponed earlier this year, which should re-appear, and Shell has a survey planned over the Saturno block. Streamer-based applications have also been made by PetroRio and Karoon for proprietary work. With so little activity elsewhere, Brazil is going to play a large part in carrying the seismic sector through its current slump, in terms of both towed-streamer and OBN operations.

More details on planned offshore seismic surveys and seismic vessel activity globally can be found in SeismicBase and the Seismic Quarterly Report.