Brazil dipped back into recession in the third quarter of 2021 as a severe drought hugely impacted farmers. PMI data for the fourth quarter so far showed a resilient service sector, but factory production contracted to a greater extent as demand was stymied by rising interest rates and price pressures. With inflation mounting, the central bank hiked the policy rate for the seventh time running, a factor that could hurt consumption and investment in coming months.

Official statistics data for the third quarter of 2021 highlighted another quarterly contraction in GDP as the agriculture and livestock sector posted its worst performance (-8.0%) in nine-and-a-half years due to a severe drought. Industrial production stabilised (0.0%), with companies in this segment negatively impacted by supply-side issues and mounting inflationary pressures. Services activity expanded (+1.1%) in what appears to be a shift in demand from goods to services as COVID-19 restrictions recede. Encouragingly, domestic consumption rose (+0.9%), but exports decreased sharply (-9.8%).

Conversely, demand for Brazilian services remained resilient in spite of the intensification of inflationary pressures and recent rises in borrowing costs.

PMI survey participants registered the fastest upturn in new business since March 2019 and a solid, albeit slower, expansion in output during November. 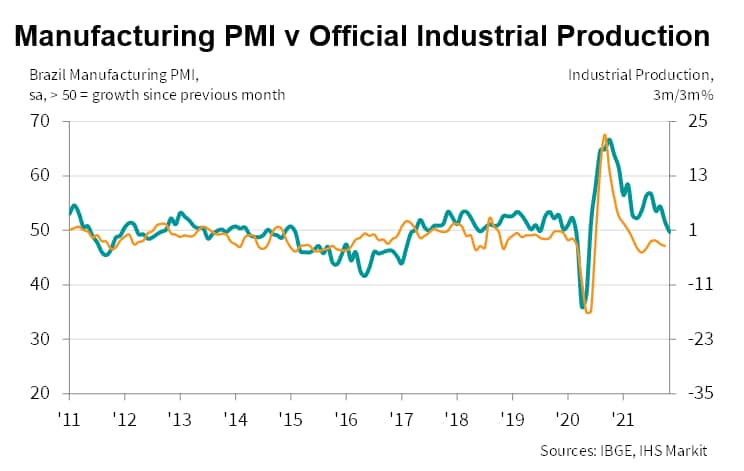 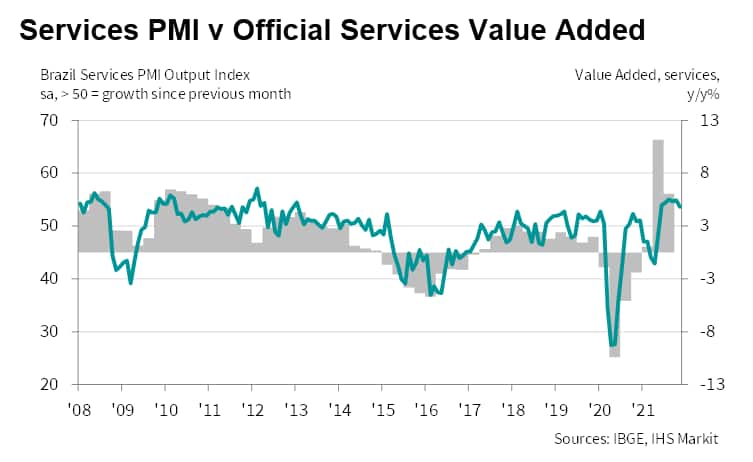 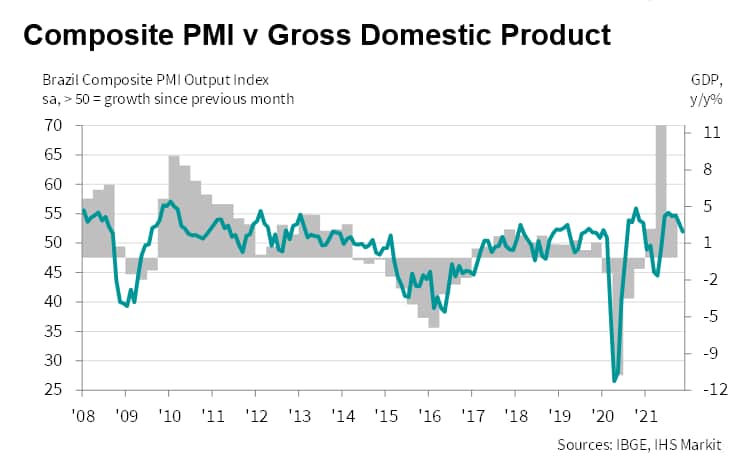 Price pressures in Brazil remained elevated, as global shortages of inputs and supply-chain disruptions were exacerbated by an unprecedented drought and associated increases in energy prices. Official inflation climbed to 10.7% in October, the highest since January 2016 and more than double the central bank's upper-limit goal (5.25%) for 2021.

While PMI data showed that input costs continued to rise at a stronger rate in manufacturing than in services midway through the final quarter of 2021, the latter registered a survey record increase (data collection started in March 2007). Subsequently, the aggregate rate of input cost inflation climbed to a series peak.

Additional cost burdens continued to be passed on to consumers in November, with prices charged for goods and services increasing further. At the private sector level, the PMI results highlighted the third-sharpest rise in output prices since comparable data became available in early-2007.

The official interest rate (SELIC) that was at a near 24-year low of 2% in February has been raised for seven consecutive times as the central bank attempts to meet its primary goal of price stability. For 2021, the inflation target is 3.75%, with a ceiling of 5.25%. The policy rate was lifted to 9.25% in November, the highest in over four years.

Survey participants of the manufacturing PMI panel continued to indicate that rising interest rates had a negative impact on the performance of the sector during November, and companies became increasingly concerned that future consumption and investment would be restricted by rising borrowing costs and inflationary pressures. 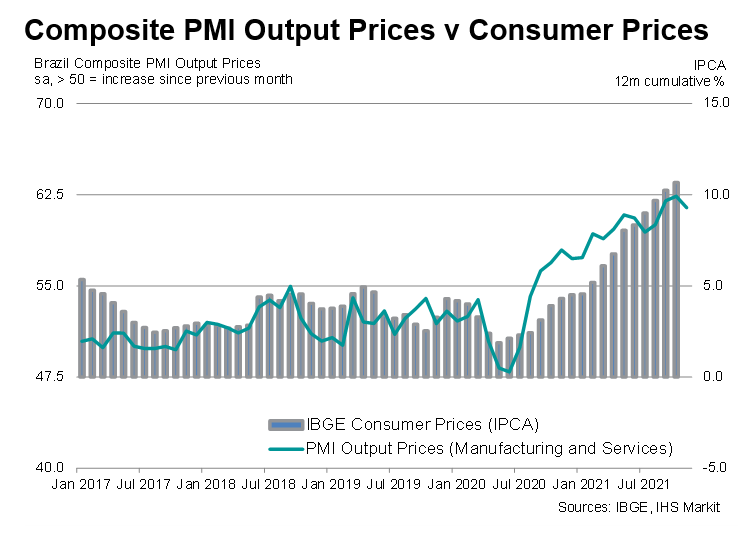 Indeed, a large proportion of purchases in Brazil are attained on credit and indebtedness is on the rise. Preliminary data from the central bank showed an increase in household debt to 59.9% of national income. Excluding mortgages, household debt amounted to 37.0% of GDP.

This is particularly concerning as the cost of borrowing is rising. In August, the annual interest rate on a credit card for households averaged 63.8% and that for overdrafts stood at 125.1%.

Throughout the COVID-19 crisis, access to credit helped households to maintain their purchasing standards and support living costs amid a reduction in real income due to the pandemic and rising inflation.

Upcoming releases of PMI data will prove useful in highlighting how recent developments affected the private sector economy in the final month of the year.

To hear about this story and much more, tune into our latest podcast here.