Brazil and Mexico: Opposite political systems in 2018 and the outlook for the respective oil and gas industries

In 2018, Brazil and Mexico held presidential elections and the results are complete opposites of the former political system ideologies. Brazil going to the right with the most market friendly government in its history, and possibly all Latin America; while Mexico swerved to the left with a government favoring the old command and control model and its national oil company, a model which Brazil utilised for many years but now rejects. This will be an interesting test of which political ideology will benefit the oil and gas industry and the respective countries the most with an increase in reserves, production, and consequently wealth for these countries. Brazil and Mexico are in different situations with Brazil having increasing reserves and production while Mexico's reserves and production have been declining.

Since 2014, Brazil and Mexico have been in competition for the limited exploration capital available in the world due to the decline in oil prices and the rise of unconventional activity in the USA. The two countries have held a total of 24 bid rounds, 17 in Mexico and seven in Brazil, with both countries attracting many companies. Offshore there were a total of 35 companies that won blocks as operator or partner, 11 of which participated in both countries. Comparing the five-year bid round history success, Brazil and Mexico had similar success in number of blocks and square kilometers awarded, but Brazil had record bonus payments for blocks with pre-salt potential that doubled its bonus and work commitments. Despite the very different political systems in place now in Brazil and Mexico, the general outlook is for a substantial increase in exploration and production activity from very low historical levels but for different reasons.

Brazil current situation and outlook: The 2018 election of President Bolsonaro and his right leaning, business friendly administration has bolstered the continued regulatory reforms, promotion, and planning to increase activity in the oil and gas industry started by the interim-Temer government in 2016. The Brazilian government has a clear sense of urgency to develop its oil and gas resources especially the pre-salt areas but also in the rest of the country. The current administration criticises the five-year period of no bid rounds from 2008 to 2013, the 10-year hiatus to offer any pre-salt blocks, and the consequent lag in oil and gas activity in the country. The general director of the ANP illustrated in various presentations how this has caused the loss of USD billions to the Brazilian economy. The one positive thing that the former PT government did was that it allowed Petrobras to drill the pre-salt discovery well in 2006 at a reported cost of over USD 200 million. Not many publicly traded companies in the world had the ability to take this financial risk since the first discovery well was non-commercial but it allowed Petrobras to identify the working petroleum system in the pre-salt section and led to the drilling of the Lula discovery well.

Since 2014, Brazil has held seven bid rounds with five ongoing (Figure 1). The highlight of the 2019 bid rounds will be the Transfer of Rights (ToR) Bid Round granted approval in late-February 2019 by the CNPE. The ToR round will include one producing block, Buzios and three other blocks tested and nearing the production phase, Atapu, Itapu, and Sepia. These blocks hold reserves in the range of 10-15 Bboe. The ToR bid round may set a world record in USD terms with projections that it may be in the USD 25 billion range due to fixed bonuses and companies having to pay Petrobras a proportionate share of sunk costs for the proven reserves. There are also another four bid rounds planned, two in 2020 and two in 2021 along with the continued asset sales by Petrobras. 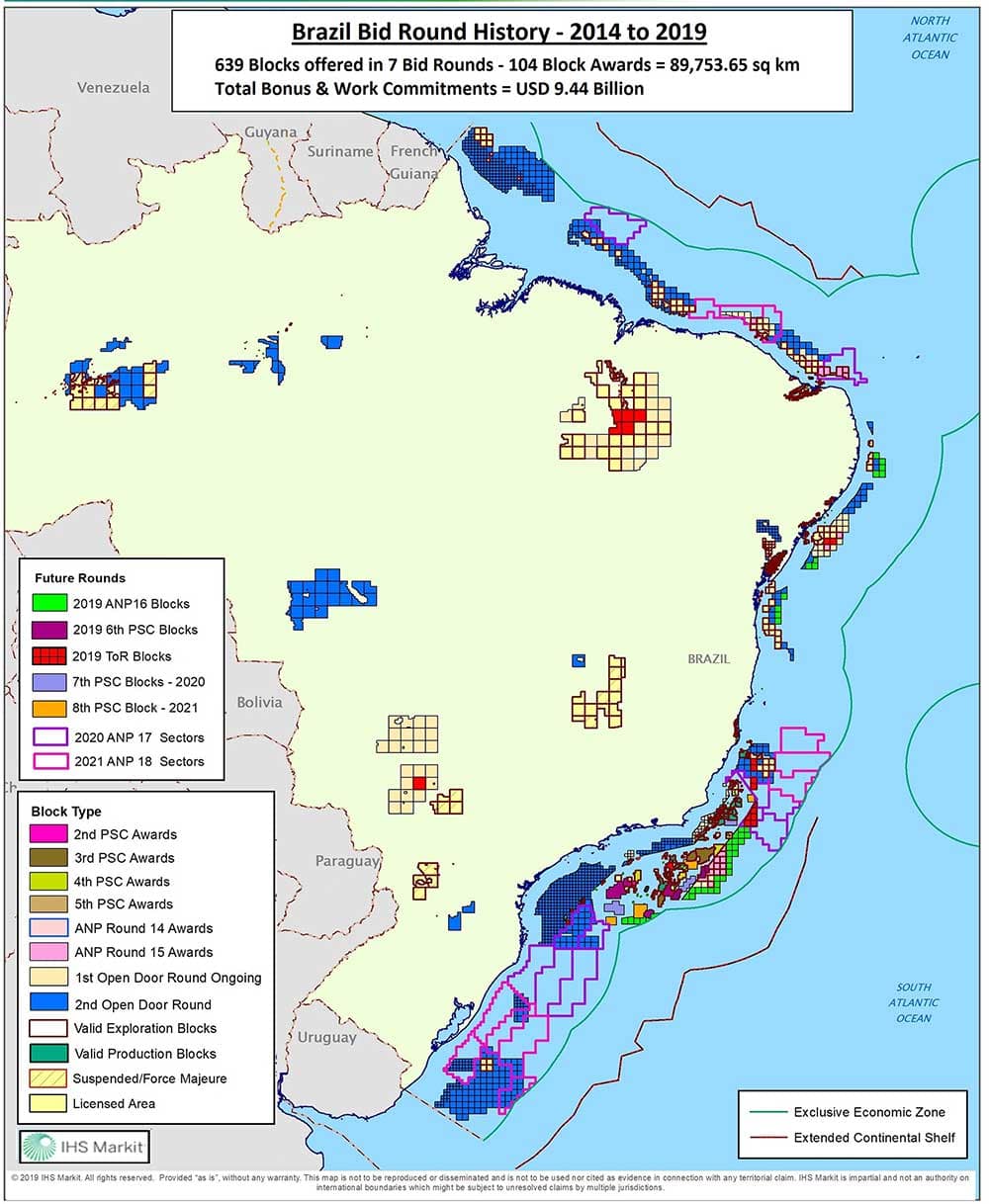 Exploration and production activity is expected to increase substantially in the coming years because of the new market friendly policies. The indicator for increased future activity was the five-year high seismic activity in 2018 and continuing into 2019. The majority of seismic has been acquired over blocks won in the seven bid rounds held the last several years. The largest number of surveys are in the pre-salt areas of the Campos and Santos basins. There remains a large prospective area in the Campos and Santos basins with pre-salt potential. Some of these areas lie beyond the 200-nautical mile limit of the exclusive economic zone (EEZ) and into the 350-nautical mile extended continental shelf (ECS) area that has been provisionally approved by the United Nations. There is a 3D survey being acquired in this area of the Santos Basin and it is speculated that a bid round for blocks may be held in the next several years when final, formal approvals are granted to Brazil. The 2D reconnaissance acquired in the area indicates there are many large structures in this region with a speculated petroleum system similar to what has been found along the Lula-Buzios-Mero trend of fields.

Drilling activity reached historically low levels in 2017 when no new-field wildcats (NFWs) were spudded offshore. Companies have more than 300 prospects planned in the 328-valid exploration blocks and additional outpost and development wells in the 436-valid production and development blocks. Development drilling has fallen substantially onshore due to Petrobras attempting to divest a large percentage of its onshore assets. A large percentage of prospects have been delayed due to environmental permitting issues, especially in the equatorial margin basins, but this issue has been improved. BP, Equinor, ExxonMobil, Shell, and Petrobras have pending environmental permit applications to drill up to 53 wells in the pre-salt trend. Some of the largest prospects in the world are expected to be drilled in Brazil in the next few years with the potential to discover fields like Lula and Buzios, or in the 5-10 Bboe range. As a result, Brazil is expected to increase production and reserves substantially over the coming years.

Mexico current situation and outlook: The 2018 election of left leaning President Obrador and his administration ushered in some uncertainty for the oil and gas industry with the campaign rhetoric regarding foreign oil companies and the lack of exploration results from the blocks awarded, the failure of the Energy Reform process, and a ban on fracking. Like Brazil, the Obrador administration does have a sense of urgency regarding the oil and gas industry situation due to the dramatic fall in production and reserves from its large legacy fields Cantarell and now Ku-Maloob-Zaap. However, the new administration has a different idea of how to increase activity by re-vitalising PEMEX as the favored national oil company again while limiting foreign company participation, quite the opposite of what Brazil is doing. The current outlook for Mexico is however more positive six months into his administration with backtracking on the fracking ban, his pledge to honor the current oil and gas contracts in place, and the possibility of resuming bid rounds if foreign operator activity results in discoveries and production in the 107 contracts awarded. Also, with the positive results starting to finally arrive in 2019, as described below, it is believed the Obrador administration will see that the most pragmatic way forward for the Mexican oil and gas industry will be to have foreign participation and competition with a re-vitalised PEMEX, in order to achieve the increase in production and reserves. The new administration is predicting halting the oil production decline in 2019 at 1.65 MMbo/d and increasing production to 2.4 MMbo/d by 2024.

Since 2014 and the historic energy reforms that opened the country to foreign direct investment in the oil and gas industry, Mexico held 17 bid rounds with one ongoing (Figure 2). There were two ongoing onshore bid rounds cancelled and all future bid rounds cancelled for at least three years. The only round ongoing for now is the PEMEX Farm-Out Bid Round or CNH-A6-7 Asignaciones/2018; however, there have been reports that this round may be cancelled or modified to a Service Contract type of bidding process. 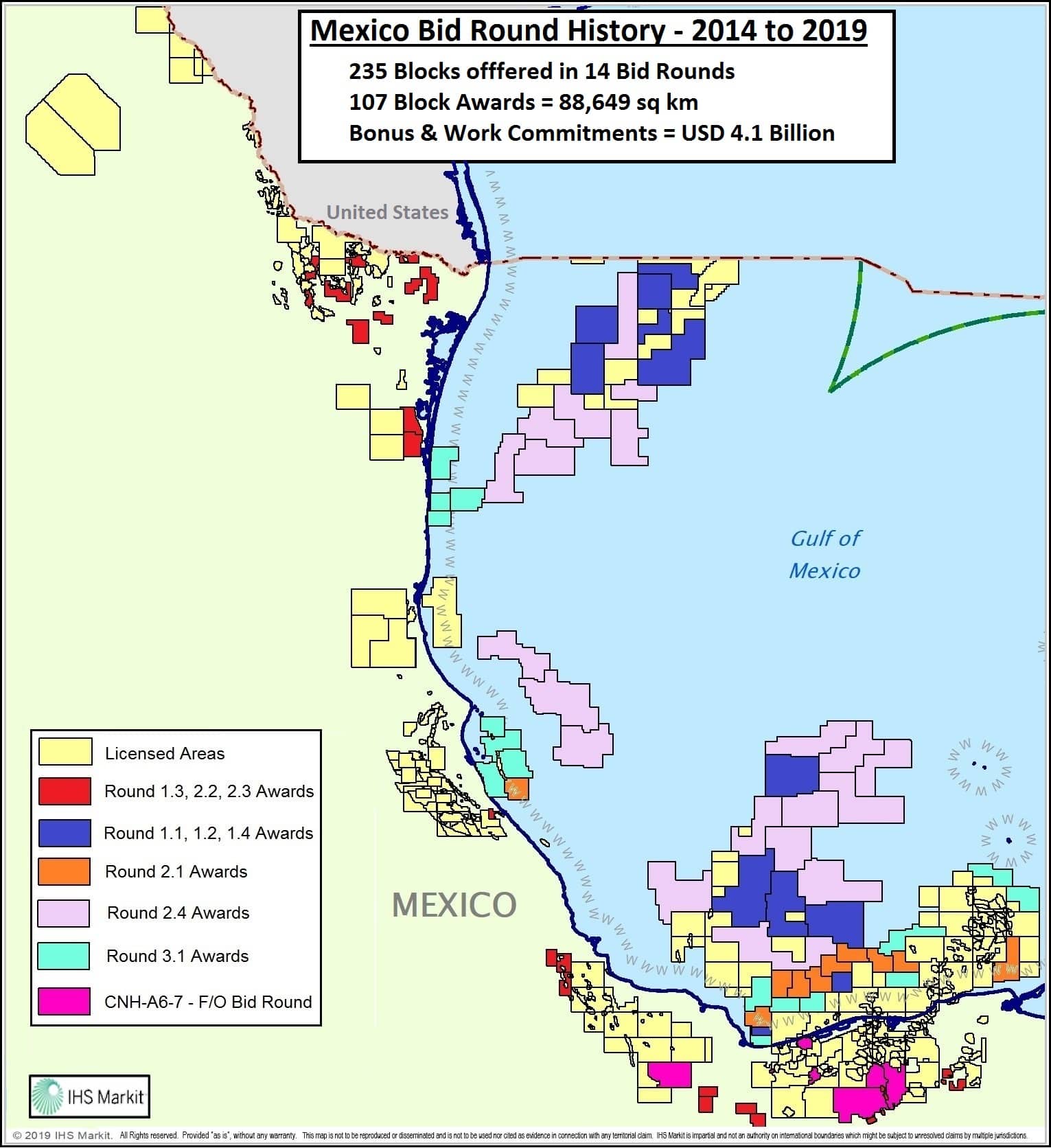 The Obrador administration has criticised the Energy Reform saying the new foreign companies have not invested very much and have not produced any oil and gas. Some of the criticism is fair such as the Energy Reform promised to lead to production of 3 MMbo/d by 2018 but production has fallen to 1.7 MMbo/d. Also, the reform process was possibly a bit too slow and timid as it took two years to award the first blocks and with the bid round competition from Brazil, the Mexican authorities had to improve terms to attract companies in subsequent bid rounds. Additionally, the rules and regulations implemented were overly complex and bureaucratic resulting in delays for approvals for drilling and other activity. Much of the criticism of the foreign companies is not valid since they are complying with contract terms and moving forward with exploration and development plans according to the rules and regulations in place, some ahead of schedule. Also, the projected capital spending by these companies will be substantial once all the exploration plans are approved, about 50% of the exploration plans have been approved while the remaining 50% are scheduled to be approved by mid-2019. The foreign companies will likely lead in evaluating the frontier areas in several basins and if commercial discoveries are made will have to invest significant capital in infrastructure projects to get the oil and gas to market.

The PEMEX financial situation the last few years, with the fall in oil prices, led to a very low level of exploration and development drilling from approximately 500 wells in 2014 to 100 wells in 2017. However, the new administration increased the PEMEX budget so that it can drill substantially more wells in 2019. It also has worked with the regulators to speed up the approval process to put into production 20 discoveries drilled between 2014 to 2018 but never appraised or developed. This will lead to drilling of over 100 wells in these fields in the next two to three years. Also, a large part of the re-vitalisation of PEMEX to increase production is to conduct many workovers and re-completions in its legacy fields. However, it will also lead to PEMEX concentrating its exploration efforts in the Sureste Basin shelf and onshore while foregoing any frontier type exploration with reductions expected in the Perdido area especially. PEMEX will also continue to appraise the unconventional oil potential of the Jurassic shales in the Tampico-Misantla and Burgos basins after the new administration apparently studied the very strict new unconventional regulations and said that this activity will be conducted with the highest industry standards.

The foreign companies that were awarded blocks in the bid rounds are delivering on the request to see results. Exploration and production activity is expected to increase substantially in 2019 by PEMEX and the foreign operators. There are over 300 prospects or commitment wells to drill. PEMEX plans to drill about 60 to 70 exploration wells in 2019 while foreign operators have plans for about 24 wells. Also, ENI, Hokchi, and Fieldwood are developing their fields in 2019. ENI will be the first foreign operator to commence production in mid-2019 from its Amoca-Miston-Tecoalli complex of fields. Exploration activity is also yielding results with Talos confirming its Zama discovery, BHP appraising the Trion field, and Murphy drilling a discovery at its Cholula prospect. The increased activity is projected to result in a high number of discoveries in 2019 that may appease the new administration's criticism of lack of results from the energy reform.

The evolution of the oil and gas industries in Brazil and Mexico will be interesting to observe over the next several years to see which industry model is the more successful in increasing activity, reserves, production, and wealth.

Michael Dyer is a Technical Research Director for Latin America, responsible for the upstream content of the Brazil and Mexico reports.