The agreement to sell a 20% stake of BP's participating interest in Oman's Block 61 to Thailand's PTT Exploration and ‎‎Production Public Company Limited (PTTEP) for USD 2.6 billion was announced on 1 February 2021. Under this agreement BP will continue as the operator of the block with a 40% working interest.

The USD 2.59 billion deal includes an initial USD 2.45 billion payable upon completion and an additional USD 140 million payable on pre-agreed impending conditions. The arrangement is subject to approval from the Sultanate of Oman and the other partners with an expected completion during 2021. This deal is part of BP's recently announced divestment programme which aims to raise USD 25 billion by 2025.

The Khazzan (Block 61) gas asset, located approximately 350 km southwest of Muscat, Oman, is one of the largest tight gas developments in the Middle East targeting 10.5 Tcf of gas resources and 400 MMbbl of condensate. The asset is made up of two development projects, Khazzan and Makarem (Phase 1) and Ghazeer (Phase 2), which began producing in 2017 and 2020 respectively.

Production from Block 61 reached an all-time high in 2020 with 1.23 Bcf/d gas and 35.6 Mbbls/d condensate after the Ghazeer (Phase 2) project came on-stream in October 2020. The Ghazeer project is expected to contribute an additional 410 MMcf/d by 2022, giving a total capacity of 1.5 Bcf/d gas and 65 Mbbls/d condensate. Gas is exported into Oman's national grid, supplying roughly 35% of Oman's domestic gas demand, as well as contributing to Oman's LNG supply.

The remainder of Oman's gas demand is predominately met by Petroleum Development Oman's (PDO) Block 6, with total gas sales expected to be greater than 1 Tcf in 2021. Recent blocks carved out of Block 6 will aim to explore potential gas developments. The gas produced from these blocks will be used to supply both the domestic energy demand as well as the Oman LNG bunkering facility, which will fuel marine vessels allowing Oman access to a new gas market. Despite this activity it is assumed currently that no new development will displace or out-compete Khazzan.

The current point forward cash flow derived from IHS Markit Vantage for the Khazzan asset (figure 1) models the revenue to be within USD 3.3 - 3.6 billion during production plateau until 2030, assuming there is no drop in reservoir performance or changes to the sales gas price. Cash flow to the partners is expected to drop significantly from around USD 2 billion to below USD 1 billion in the late 2020s once all initial costs have been recovered. It is assumed that most of the capital expenditure has been sunk during the initial developments of the field, but it is estimated that between $2.5-3 /boe (real 2021) will be required for near term capital expenditures. In addition, operational costs are modelled between $3-4 /boe (real 2021) with an expected decommissioning cost of $0.5/boe (real 2021). Point forward Khazzan costs are estimated to be amongst the lowest upstream costs in Oman, giving Khazzan the edge over Oman's other predominantly mature assets. 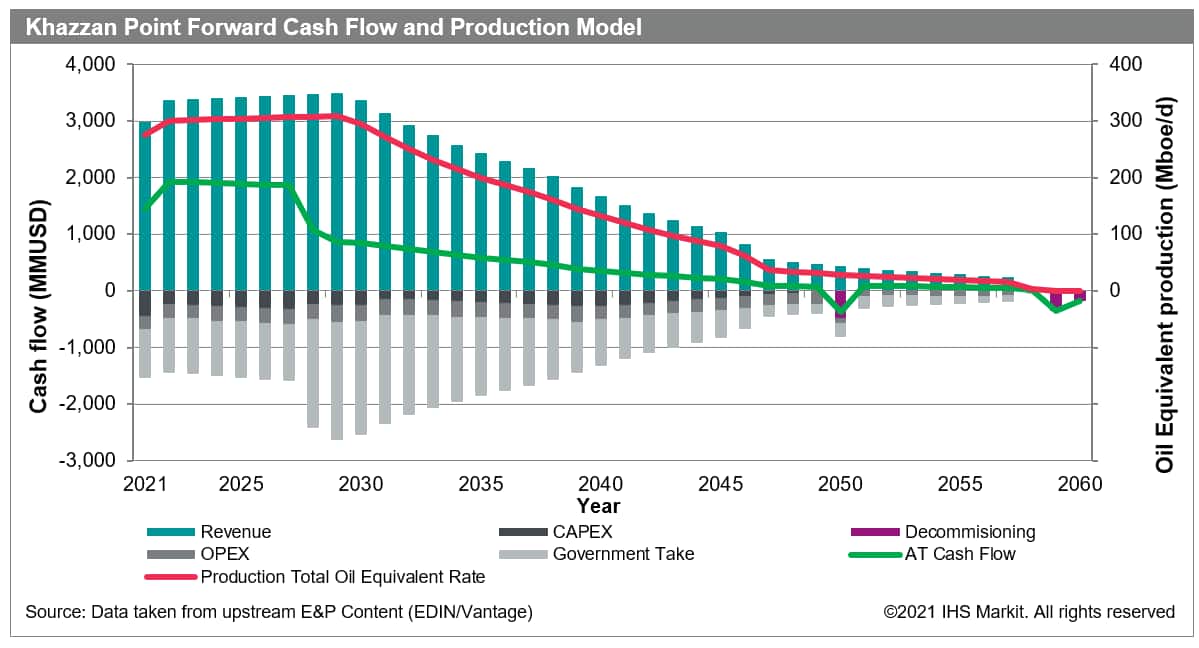 As of February 2021, using the IHS Markit Vantage DCF valuation model, the Block 61 (Khazzan-Makarem Gas Field) asset is valued with a gross net present value of around USD 13 billion at a 10% discount rate. A key component of this valuation is the export price for the gas, which was $3.5 /Mscf in 2019 and is assumed to be inflated 2% annually. This valuation matches the $2.6 billion that PTTEP is paying BP for a 20% interest in the asset.

Learn more about our global coverage of upstream oil and gas assets.