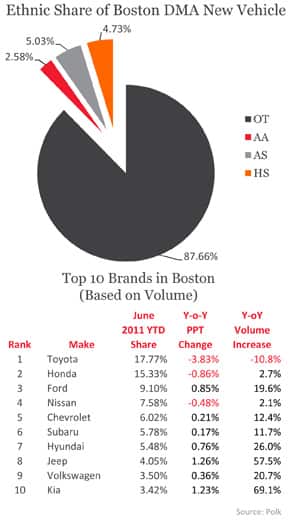 To help the public gain insight into the impact diverse market customers (African American, Asian and Hispanic) are having on the U.S. light vehicle industry, this is the sixth installment in a series of blogs focused on the Top U.S. markets based on volume year-to-date (YTD) through June 2011.

The focus of this blog is the Boston market, also known as "Beantown" or my personal favorite "City of Champions" which refers to Boston's recent streak of dominance in sports with the Boston Red Sox, Celtics, Bruins and New England Patriots each winning World (i.e., national) Championships in the last decade.

Boston is the No. 5 market in the country based on new light vehicle sales YTD. The overall industry is up 17.5% comparing 2011 June YTD vs 2010 YTD registrations. During the same period, Boston's gain is approximately 9 percentage points below the national average at 8.5%.

Similar to the Chicago market, Boston's Top 10 brand list is diverse, but I wouldn't say balanced as it includes Asian brands (60%), domestic brands (30%) and a single European brand (10%) as shown in the adjacent table.

From a brand perspective, Toyota and Honda lead the way with one of three new vehicles originating from these brands. Three to watch are No. 3 Ford (+20%) along with No. 8 Jeep (+58%) and No. 10 Kia (+69%) with the latter two posting respective year-over-year volume increases in excess of 58%.

So which model rules supreme on the streets of the "City of Champions?" See the Top 5 model list based on volume purchased by each diverse market listed (below).

The "Ruler of the Road" in the Boston DMA is the Honda CR-V. Why, because the CR-V was rated No. 1 by three groups (overall DMA, the Non-ethnic community and Women) and no lower than No. 4 by all other groups. Congratulations go to Honda and the CR-V for dominating the Beantown list of Top 5 models.

This is the sixth installment of the diverse automotive market summary series with the Houston DMA on deck. I look forward to hearing your thoughts as I work to increase the public's automotive knowledge.