On January 19th a blog titled "The Index-Fund Dilemma: An Empirical Study of the Lending-Voting Tradeoff" was published, which along with the linked academic paper, makes claims about how the 2019 change in SEC guidance impacted beneficial owners and the lending of shares over proxy record dates. To support the arguments, the paper presents a broad statistical analysis as well as a specific anecdote to illustrate. The paper relies on the change in the ratio of lendable shares to shares outstanding. If a firm's shares outstanding declined during the observation period, potentially as the result of share buybacks, that alone could increase the ratio without requiring any action on the part of beneficial owners. With that being said, the change in shares outstanding alone would not justify the observed increase in borrow cost detailed in this note. It is also worth noting that time trends do not fully explain the paper's findings, which are based on a difference-in-difference design comparing high-index and low-index ownership firms. Per the author's description, "The paper generally seeks to advance the argument that beneficial owners responded to last year's SEC guidance by failing to recall a larger proportion of their holdings over proxy dates, to the detriment of their ability to impact corporate governance by voting."

The example presented in the paper is GameStop around the firm's proxy record date in 2020, however the YoY increase in the percentage of shares outstanding cited in the report, both in lendable inventories and on-loan, was driven by GameStop repurchasing shares, which reduced shares outstanding. Lendable inventories and shares on loan also declined over that time, however the decline in shares outstanding was greater so the ratios increased. Over the proxy date on April 20th GameStop shares were extremely difficult to borrow, partly the result of shares having been steadily taken out of lending programs from September 2019 through the proxy record date.

On December 10, 2019 GameStop Corp announced third quarter earnings and revealed the extent of their share repurchases in the quarter, 22.6m shares, which immediately reduced the shares outstanding by 27%. The repurchases occurred during the quarter, so short sellers with open positions were already borrowing from the remaining shares outstanding by the time the announcement was made, which meant there was not a scramble to find new shares on that date, it was just an occasion for data aggregators to reflect the new shares outstanding figure. The result was that on a single day the percentage of outstanding shares on-loan (or in lending pools) increased by 27%. 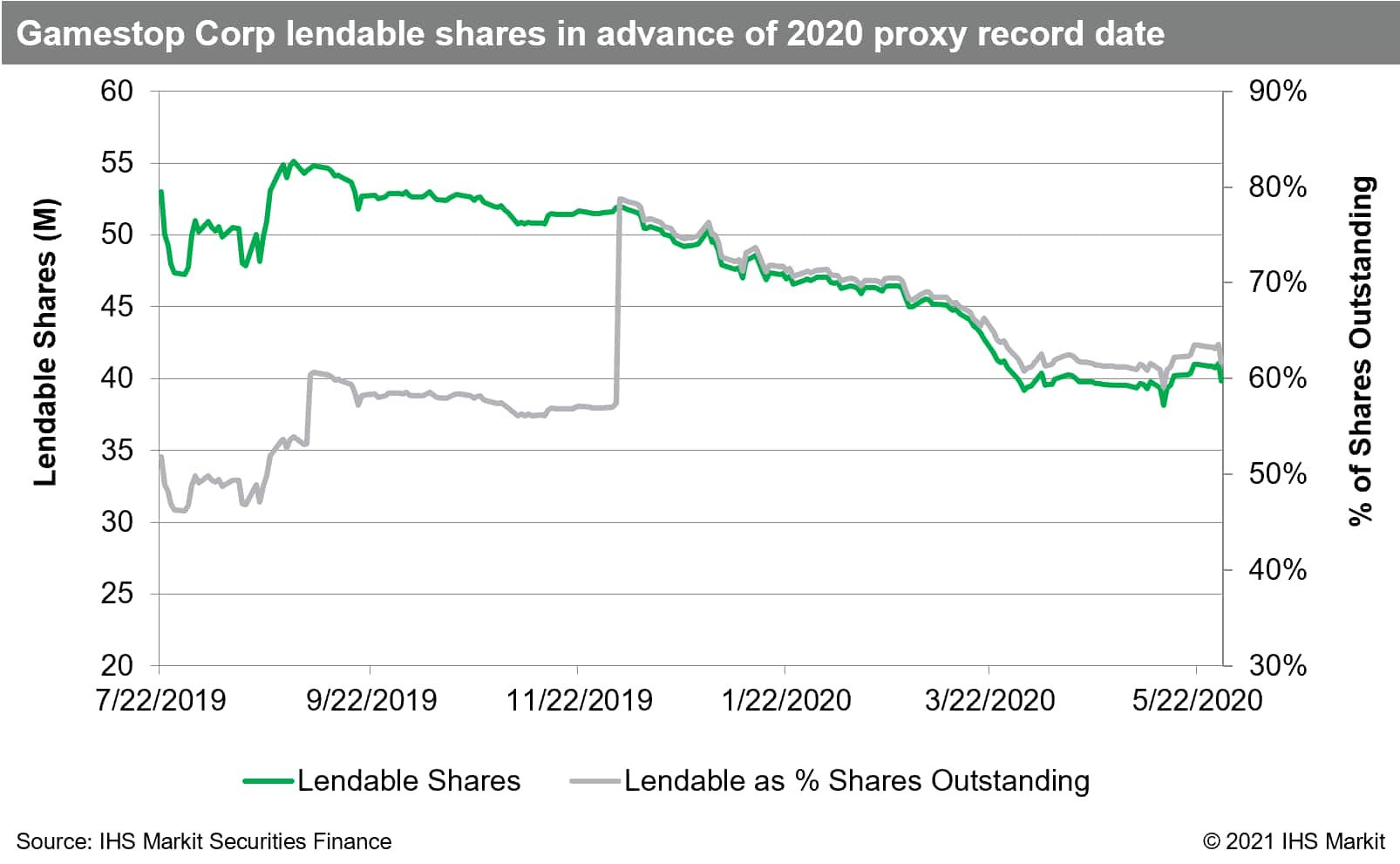 The number of GameStop shares reported to IHS Markit as being in lending programs peaked at 55m shares on August 30th, 2019. By the time of the proxy vote the number of shares had been reduced to just below 40m, a 28% decline. The scarcity of lendable shares drove a substantial increase in the borrow cost, which made the opportunity to lend shares more lucrative of an alternative to voting. The fee for new borrows averaged more than 100% annualized over the last week of April and first week of May with the average for all open borrows being greater than 80%. That means a beneficial owner who had refrained from lending prior to the proxy record date on April 20th would have been able to lend faced with the option to lend shares at a rate of more than 80% annualized, a return of more than 20bps just for that single date. If they had left the shares on loan until May 10th, when spot rates started to decline, they would have earned 4%, under even the most conservative assumption they would have only achieved the average fee for all open loans (if shares had been on loan for the entire year they would have earned more than 24% under this assumption). The takeaway is that despite the improved economics for lenders, with average borrow cost having roughly tripled from the start of 2020 to the proxy date, there were still far fewer shares being made available by beneficial owners.

Part of the explanation the reduction in lendable shares is that beneficial owners simply sold their holdings. From the 13F filing on December 31st to the March 31st filing, non-hedge fund institutional holders reduced their holdings by 12.8m shares, however even if 100% of those shares had previously been made available to lend it still wouldn't fully account for the 15.3m shares taken out of lending programs over that time. 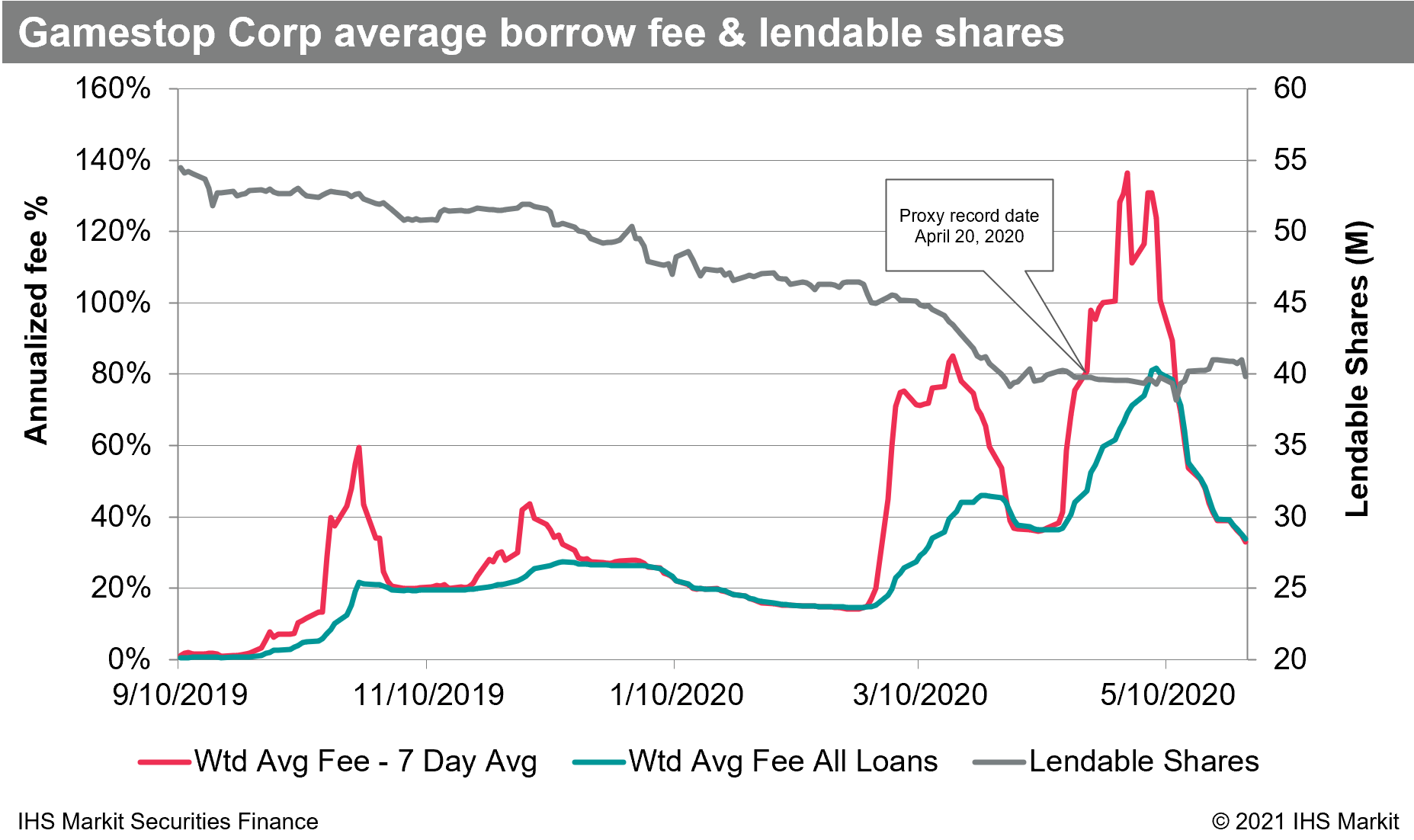 Looking at the hedge fund 13F holdings helps to clarify the borrow dynamics in front of the vote. Between the December 31st and March 31st 13F filing, the number of shares held by hedge funds increased by 5m shares, to 17m shares in total. While some hedge funds were adding to long positions others were covering shorts; the bi-monthly short interest data published by NYSE declined by 6.7m shares over the course of Q1. Over the same time the gap between the short interest and number of shares reported as on-loan to IHS Markit increased by 9m shares. That gap is generally indicative of the number of shares broker-dealers can source within their own custody, typically hedge fund longs or delta-1 trading desk positions, so an increase in the gap can be interpreted as increasing broker-dealer supply. The implication is that over the course of Q1, some hedge funds added to long positions in GameStop, which in turn reduced the need for prime brokers to borrow shares externally for the funds who were short, while the total number of shares short declined.

For the borrow cost to increase as much as it did in late-April and early-May, after the short interest declined, suggests that the friction caused by the reduction of shares in lending pools was manifest. That impact may have been exacerbated by hedge fund longs who had previously lent their shares recalling them ahead of the vote. The exchange short interest declined by 1.8m shares from April 15th to April 30th, which included the proxy record date, however borrowed shares only declined by 269k shares. The decline in the gap between the short interest and borrowed shares reflected a reduction in dealer inventory available for borrow, which may have been the result of hedge fund longs recalling shares. Over the next month borrows declined by 4m shares while short interest only declined by 700k shares, suggesting that brokers had reverted to sourcing a greater portion of the borrow internally.

Equity derivative exposures, and related trading in common shares, may have also contributed to the challenge of borrowing GameStop shares over the 2020 proxy. That topic is beyond the scope of this note but would need to be considered for a full analysis of the trading dynamics for GameStop shares.

The decision to lend an equity over a proxy date means passing voting rights on to the borrower, typically a short seller, who in turn passes the voting right to the ultimate purchaser. This decision is made weighing the impact of the vote against the value to be garnered by lending. Academic research utilizing IHS Markit Securities Finance data has provided empirical evidence to suggest that making these decisions is, and has long been, an important priority for beneficial owners. Lenders have tools which allow them to understand record dates and materiality of votes which - along with securities finance data- supports a thoughtful decision-making process regarding the decision to lend or recall. While the ESG acronym is new, the consideration of corporate governance and stewardship for beneficial owners in securities lending is not. The need for many market participants in 2021 may not be so much putting into place relevant policies regarding governance but rather illuminating those policies for interested stakeholders. For the shareholders of GameStop, the recent increase in the share price has been spectacular regardless of the decision to lend, but the additional return was surely welcomed by those who did. 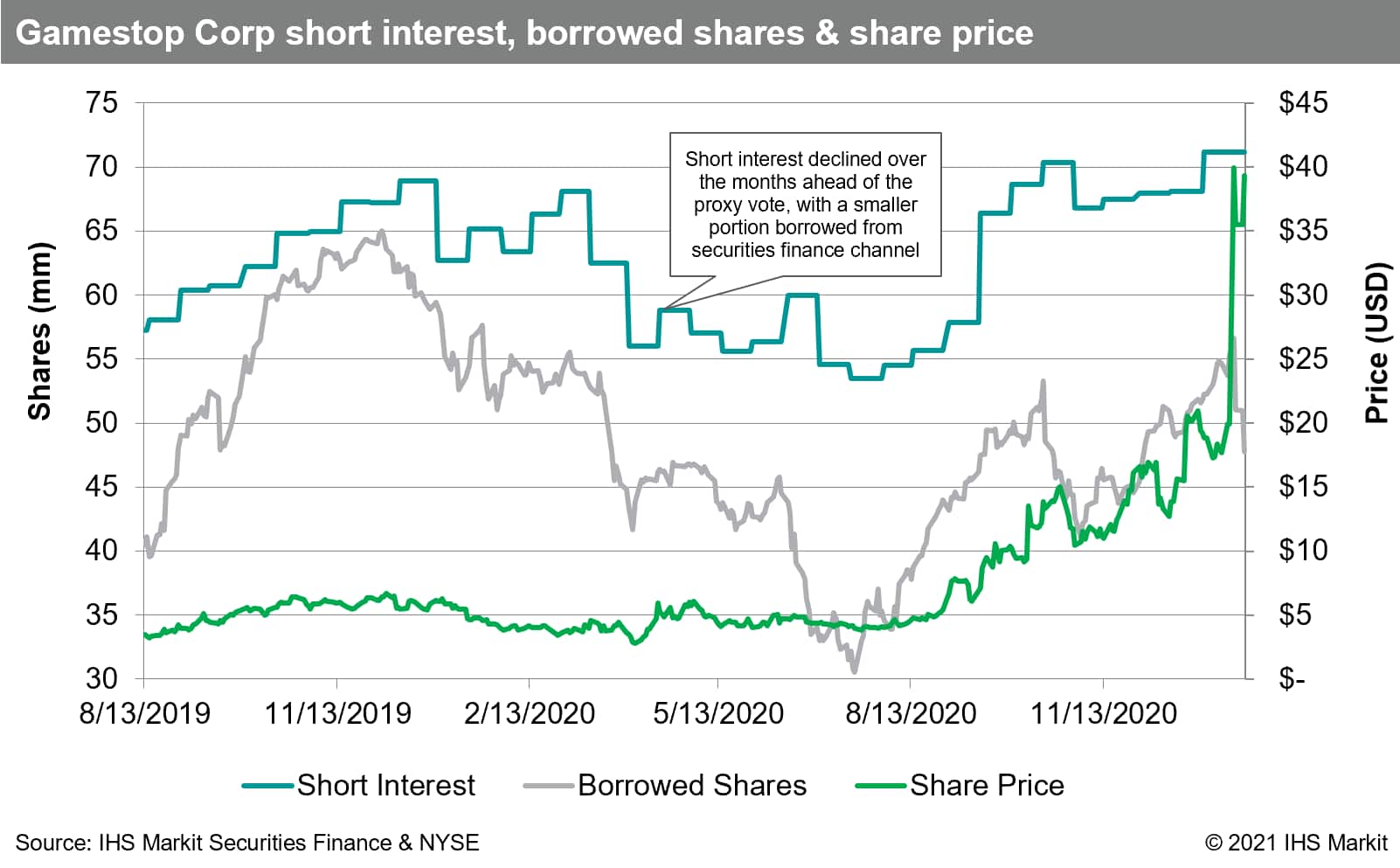