For recent IPOs, lockup expiries have increasingly drawn the attention of short sellers. Along with a dramatic increase in tradable shares, it is likely that at least some amount will be sold, pushing down on the share price. These short-term dislocations can make for profitable short trades.

The expiration of pre-IPO lockups is stated in the prospectus, however it is subject to change. For example on August 7th, 2019, Lyft, Inc. announced that its lockup period would end on August 19th, moving up from the expected date of September 24th. This announcement was made in conjunction with the firm's Q2 earnings report; the immediate market reaction to the firm's loss of $0.68 per share (adjusted) was positive, with the share price closing up 3% on August 8th. 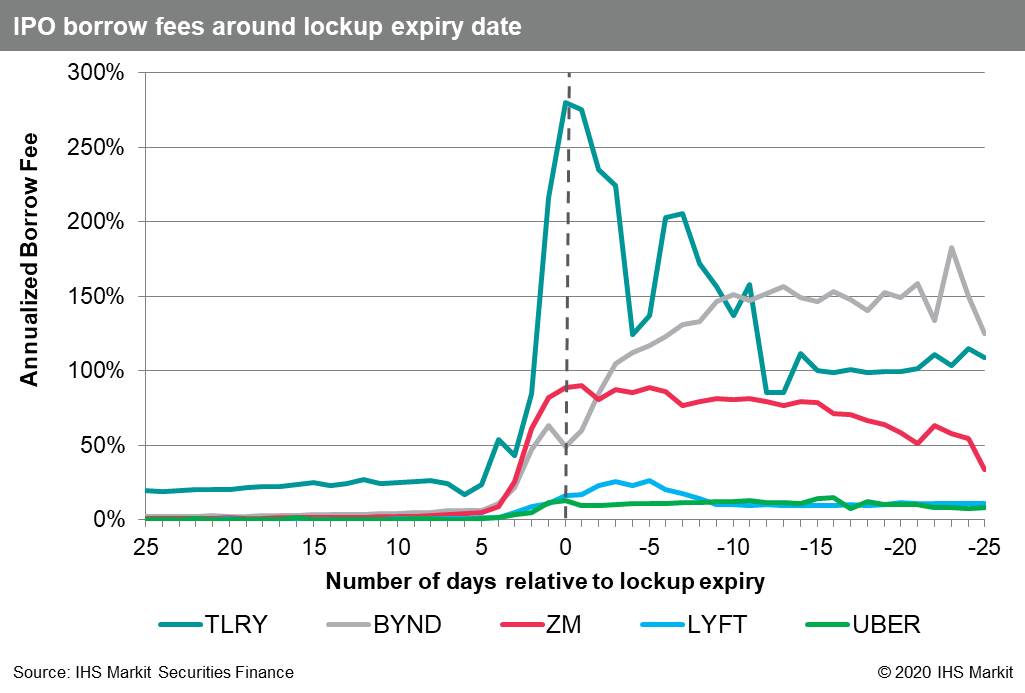 Lyft's foreshortened lockup period drew an increase in borrow demand, with the shares on loan increasing from 23m on August 6th to 26m on August 14th, the most on record in terms of shares and dollar value. The announcement, and increased borrow demand, caused the borrow cost to double on the 7th, with the cost of new borrows peaking at 33% on August 12th. The lockup expiry meant that nearly 90% of the shares outstanding would become freely tradable for the first time, where previously the free float had only been 11% of shares outstanding.

Similarly, the share price of UBER declined 20% in the week ahead of lockup expiry on November 6th; BYND shares fell by 22% in the week ahead of expiry on October 29th. Beyond Meat differed in that the borrow cost was north of 100% annualized fee for new borrows, at which levels even a short term trade can be meaningfully impacted by borrow costs. The borrow cost for UBER also increased ahead of expiry, but never exceeded 20%. Which brings us to the upcoming lockup expiries in March, with the two most anticipated being Peloton (PTON) and SmileDirectClub (SDC). Peloton's currently planned lockup expiry on March 25th will fall in the blackout period ahead of Q3 earnings, so it may be moved up when the firm reports earnings on January 5th. As seen with Lyft, that can pull forward demand from short sellers and lead to further increase in borrow costs. SmileDirectClub has not yet announced a date for its Q4 earnings report, however its anticipated March 10th lockup expiry may also be subject to change owing to earnings blackout period.

As of February 4th, there were 45m PTON shares on loan, worth $1.5bn, with an average borrow cost of 35%. For SDC there are 35m shares on loan, worth $462m, with an average fee just above 40%. In both cases the borrow cost spiked in January, with new borrows in PTON briefly exceeding 70% on January 16th, while new borrow fee for SDC reached 95% on January 22nd. After trending down from the mid-January peak, fees for new PTON borrows spiked back to 60% on February 4th in anticipation of the earnings announcement and possible moving forward of the lockup expiry. When the PTON lockup expires nearly 85% of the shares outstanding will become freely tradable for the first time following the IPO.

Conclusion:
As will all profit opportunities, there is no reward without risk. Just ask Tilray shorts, who were surprised to learn, on January 11th, 2019, that the largest locked up shareholder, who owned more than 70% of shares, was not planning to sell any when the lockup expired on January 15th. That sent the share price up 24% on January 14th. The share price did decline by 17% on the Jan 15th lockup expiry, with increased volume, but the price closed above the January 10th closing price, making for a costly round trip for short sellers, who had paid fees as high as 800% for borrows the week prior.

A key consideration for long and short investors is the lending fee or borrow cost associated with their positions, which is especially true for IPOs with relatively few outstanding shares being freely tradable. Tracking the supply, demand and borrow cost ahead of known catalysts allows investors of all stripes to operate efficiently.